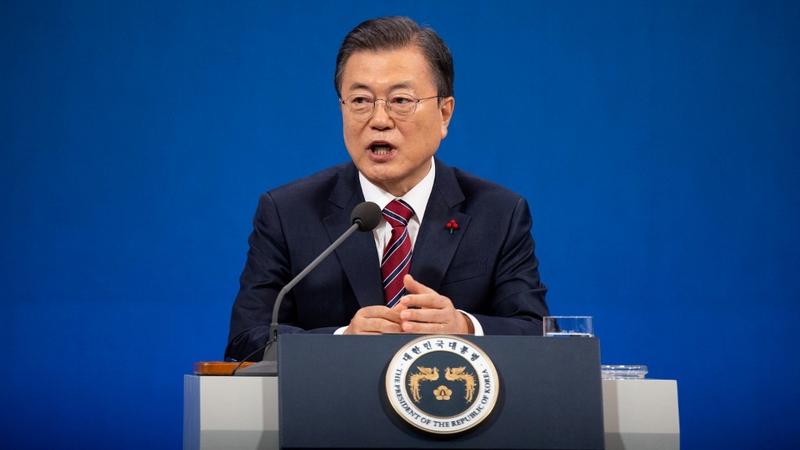 The Republic of Korea's President Moon Jae-in speaks during an online New Year press conference with local and foreign journalists at the Presidential Blue House in Seoul on Jan 18, 2021. (JEON HEON-KYUN / POOL / AFP)

South Korea plans to accelerate its space development program including by boosting cooperation with the US.

“We will expand our space cooperation with the international community, including the US,” South Korean President Moon Jae-in said in a speech on Sunday, adding that Seoul will speed up its space launch vehicle development program.

The speech comes two weeks after US President Joe Biden met Moon at the White House as part of Washington’s push to build a united front with allies.

The US and South Korea agreed to terminate bilateral missile guidelines that have long restricted Seoul’s development of missiles to under the range of 800 kilometers (500 miles).

“The termination of the missile guideline not only means we have secured our ‘missile sovereignty,’ but also marks the beginning of our journey to space,” Moon said. Based on the strong South Korea-US alliance, “we will respond more proactively to the changing security environment,” he said.

After the US-South Korea summit in Washington, South Korea joined NASA’s moon-exploration coalition, becoming the 10th signatory nation to the Artemis Accord -- a pact that governs behavior norms of those taking part in the lunar exploration program. It will spend 615 billion won (US$553.1 million) this year on space development aimed at boosting its capacity to produce satellites, rockets and other key equipment, according to the Ministry of Science and ICT in February.

In his speech, Moon also suggested that South Korea could play a bigger role in the international stage. He said South Korea’s alliance with the US is to protect democratic values and human rights, adding that Seoul wants to develop it into a more “comprehensive alliance.”

READ MORE: Moon to visit Washington for summit with Biden in May