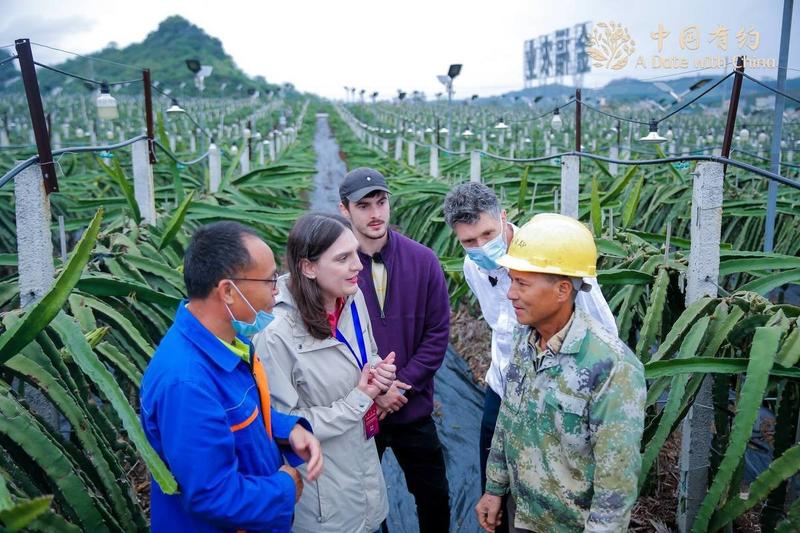 Journalists with "A Date with China" international media tour asks a man with a slight disability about his life-changing employment at the Jinfu Dragonfruit Base in Nanning, Southwest China's Guangxi Zhuang autonomous region, on April 28, 2021. (PHOTO PROVIDED TO CHINADAILY.COM.CN)

Xi Jinping, general secretary of the Communist Party of China Central Committee, has underlined the significance of bolstering the nation's capacity in engaging in international communication to foster an image of China that is trustworthy, lovable and respectable.

In remarks made at a group study session of the Political Bureau of the CPC Central Committee on Monday, Xi underscored that telling China's stories well, making the nation's voices heard and presenting a true, multidimensional, and panoramic view of China is a key task in strengthening the nation's capacity in international communication.

He urged a keener understanding on the importance and necessity of improving China's work in international communication in order to build an international discourse power that can match the nation's comprehensive national strength and global status.

President Xi Jinping underscored that telling China's stories well, making the nation's voices heard and presenting a true, multidimensional, and panoramic view of China is a key task in strengthening the nation's capacity in international communication

Xi noted that the Party has always attached importance to international communication, and China's international discourse power and influence have seen remarkable growth since the Party's 18th National Congress in 2012.

Under new circumstances and faced with new tasks, Xi said it is important to enhance top-level design, establish a strategic communication system with distinctive Chinese characteristics and improve the influence of international communication, the attraction of Chinese culture, affinity with China's image, the persuasiveness of Chinese discourse and the ability to guide international public opinion.

New concepts, domains and expressions should be created to better tell China's stories and show the power of the thinking and the spirit behind the stories, Xi said.

It is important to step up efforts to publicize and expound on the CPC, helping the global audience understand that the CPC truly fights for the happiness of the Chinese people and learn about why the CPC is capable, Marxism really works and socialism with Chinese characteristics excels, he said.

To enable Chinese culture to go global more effectively, Xi stressed the need to interpret and present it in a way that embodies the nation's spirit and wisdom.

Xi said a tone that displayed openness, confidence and conveyed modesty and humility must be maintained.

With China approaching the center stage of the world and being capable and responsible in playing a greater role in global affairs, Xi called for steps to make Chinese proposals, wisdom and approaches better known.

The general secretary required across-the-board elaboration on China's philosophy on development, civilization, security, human rights, ecology, international order and global governance, saying that the nation must hold high the banner of a community with a shared future for mankind.

He reiterated the need to advocate multilateralism, oppose unilateralism and hegemony and to guide the international community to jointly work toward a new international order that is more fair and reasonable.

It is important to make good use of various touching cases to explain that China's own development is the nation's greatest contribution to the world and, in doing so, the country has contributed wisdom to the solution of human issues, Xi said.

The nation must continue to host events in various forms that promote people-to-people exchanges to scale up exchanges and mutual understanding between people from China and different countries, he said.

In a bid to comprehensively elevate the efficiency of international communication, China must strengthen a special team of talents that can meet the requirements for work in this regard in the new era, he added.

Xi called for the use of targeted communication strategies that can cater to the demand of different regions, countries and groups of audiences to spread Chinese stories and voices globally, and with an approach that is tailored to particular regions and audiences.

He also urged unremitting efforts to expand the circle of friends that understand China and befriend China in international public opinion, saying that the nation must improve its capacity to make its voice heard on major issues.