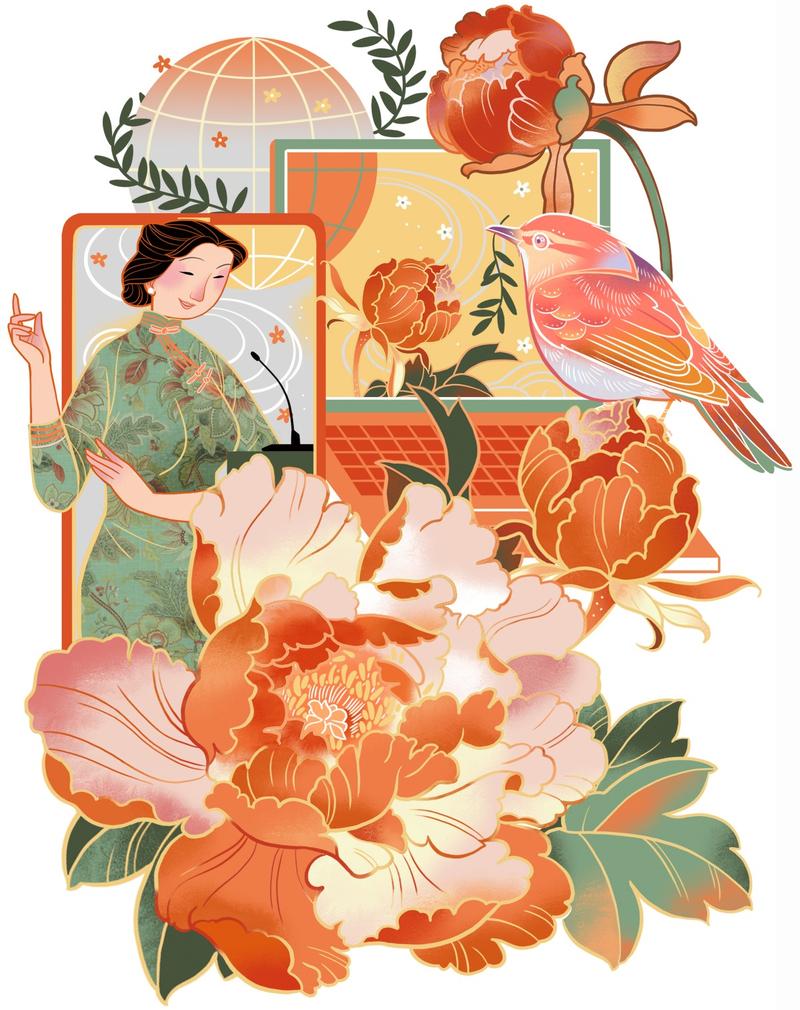 In the past 70 years since the founding of New China, the Chinese people have created the miracles of rapid economic development and long-term social stability. Insightful people around the world have expressed admiration for what has been achieved.

However, there are still some people in the world who have little knowledge of and even misunderstandings and prejudices about China's development. Since the launch of reform and opening-up in 1978, China has been embracing the world, learning from the world, integrating into the world and making contributions to the world, in the hope of achieving win-win cooperation with all countries and promoting self-development as well as common development with the rest of the world. This process is still ongoing, and we need to better convey China's views and make China's voice heard so that more people can understand China.

Since the 18th National Congress of the Communist Party of China in late 2012, President Xi Jinping has attached great importance to the country's international communication and repeatedly stressed in his speeches that we should better tell China's stories and strengthen China's voice in the international arena. To do this, we should grasp the profound connotations of China's stories and master effective ways to tell China's stories to actively increase China's voice, enhance the international community's recognition of China's development and present to the world an authentic, multi-dimensional and comprehensive picture of China.

Under the guidance of Xi Jinping Thought on Diplomacy, China has made remarkable progress in promoting communication with the world since the 18th Party Congress. We have put forward China's policy positions and introduced important initiatives on many occasions, demonstrating our support for economic globalization and multilateralism, and presenting China's voice to the world.

Many Chinese experts, scholars and media outlets have more actively come onto the international stage, enabling a greater diversity of China's voices to be heard and provide responses to the concerns of the outside world. At the same time, China's international communication channels have become more diversified with regard to both its general communication with the rest of the world as a whole and its bilateral communication with individual countries, and it has accelerated the transformation from traditional media to integrated multimedia.

While firmly safeguarding China's sovereignty, security and development interests, we have actively articulated our positions and propositions on various issues. Not only has the Chinese government taken a clear-cut and firm stance on diplomatic occasions, but the Chinese business community and academia have also come to the fore and played an important role in helping promote China's major-country diplomacy through their practices that have clarified some vague perceptions of China's diplomacy held by the outside world. These achievements and accumulated experience give us the confidence that we can better get across what China stands for to the world with active efforts to make China's voice heard.

It requires dedicated and systematic efforts to improve a country's international communication capabilities. The world's perception of China can be shaped by Chinese narrative and behaviors. We should accurately grasp the trend of the times, constantly strengthen our ability to build our narrative, and explore the trends that are not only in line with China's national conditions but also reflect those of the world, so as to make China's international communication more targeted and timely, enhance its appeal, and strengthen the international influence of Chinese discourse.

Promote community with a shared future

We should actively strengthen the construction of our foreign narrative system, use innovative ways to tell our stories to the world and enhance the affinity of our cultural communication to make the image of contemporary China more appealing to the people in the world. For example, to more actively respond to the concerns of the international community about the novel coronavirus outbreak, we need to use various forms to make our voice heard in a timely manner, narrate our fight against the epidemic, clearly explain our positive actions and progress in epidemic prevention and control, and promote our vision of a community with a shared future for mankind.

In theory, a country's narrative contains multi-faceted elements. First is content and quality. To be effective, the narrative needs to be supported by high-quality content.

Successful narrative needs to be based on facts

Third are the facts and practices from which the narrative is built. Successful discourse needs to be based on abundant facts and effective practices. Hollow concepts and declarations are not enough to persuade and convince people and it is difficult for a country to truly enhance its narrative if it lacks substance.

Fourth is reception and feedback. Only by winning the recognition of foreign audiences and learn from their feedback can the influence of the narrative be improved and strengthened.

As China moves closer to the center of the world stage, more and more countries and people worldwide want to understand China, look at China objectively and explore the reasons underlying its great achievements. China's voice has grown with the expansion of its influence.

However, generally speaking, Western dominance in international narrative over countries in the East has not fundamentally changed, and China's voice and influence in international discourse still need to be improved. At the same time, we have not fully taken advantage of the narrative capabilities we have already acquired. It should be noted that international public opinions are diverse and multi-faceted, and audiences from different backgrounds usually receive information from different channels.

The official and diplomatic communication channel alone is not enough for all occasions, which means more players need to participate in the promotion of a country's international narrative.

Compared with the past, the international community is paying more attention to China's policy propositions and proposals on various issues, and hopes to have firsthand information and in-depth elucidation from China. However, such first-hand information is still quite limited and insufficient to reflect the rich social practices and culture of contemporary China, and cannot satisfy the desire of the international community to learn more about China of today.

Under the new circumstances, we need to be more sensitive to and fully grasp the opportunities brought about by the changing times and take the initiative to make our voices heard. This will not only enhance the influence of our own narrative, but will also help shape international public opinion to better reflect today's world in a more balanced way.

China is willing to conduct friendly exchanges and engage in dialogue with other countries on an equal footing. A country that can successfully wield its international narrative power is one which is good at projecting its voice using both its own microphone and the microphones of others. In other words, in order to gain the initiative in international communication, we need to actively participate in discussions and share our ideas.

We need to win the understanding, respect and recognition of international audiences through penetrating analysis, appealing ideas and persuasive arguments. Based on the profound and enduring values of the Chinese culture, we should adhere to the spirit of humility, inclusiveness and learning from others, and employ a plain, down-to-earth narrative style to convey what is happening in China, and make objective judgments on what is happening outside China. We should form a narrative style with Chinese characteristics that gives China a distinctive voice that can be heard and understood in international discourse.

Focus on communication with people outside China

The world is going through changes not seen in a century. Although we have entered the 21st century, some people's minds are still defined by the past. They are used to observing new things with an old perspective. There is always a struggle between the voices advocating multilateralism and unilateralism in the international arena.

We need a strong and positive narrative that lets the world know that China's development not only benefits the Chinese people in their pursuit for a better life, but also benefits the world by helping it build a more just and affluent environment. To get our voice better heard in the international arena, we need to focus on communicating with people in other countries and gaining more understanding and trust from them, which require us to use innovative ideas and methods so we can better tell the Chinese story.

The international community is now paying close attention to China, not only its development achievements, but also how a developing China will influence the world. As China moves closer to the center of the world stage, there are some people in the world who, out of ideological prejudice or arrogance, seek to distort and discredit China. They seek to apply the development logic of some Western countries to China. But human civilization has a long history and it is not an iron law of history that a country will inevitably seek hegemony after becoming powerful.

Those who look at the world with an outdated, narrow, one-sided view of history cannot see the trend of the times and the need for the world to move toward a community with a shared future for mankind. To change the view of others and convince them there can be a shared future, we cannot rely simply on explanation and argument, we need to show the world a more real, multi-dimensional, comprehensive picture of China, more convincingly explain China's intentions and goals, and focus attention on China's interactions with other countries and how through those interactions countries are jointly working for common purposes.

There is need to interpret global issues and trends

We should actively try to interpret international issues and world trends with Chinese theories and perspectives, elucidate the Chinese spirit and showcase the Chinese way of doing things to gain more understanding and support from the world.

To tell China's story well, we need to not only speak about the Chinese system, but also relate the joys and sorrows of ordinary people. In doing so, we should use innovative methods of communication and narrative concepts, so that we can ensure that what we want to tell can be heard by foreign audiences and enhance the affinity of our communication. We can start from the everyday lives of Chinese people, so foreigners can better understand the true myriad of "Chinese life", and in this way gain a better appreciation of the Chinese path, Chinese theory, Chinese system and Chinese culture.

In the new era, we need to earnestly study and develop a deep understanding of Xi Jinping Thought on Diplomacy and introduce a real, multi-dimensional and comprehensive China to the world. What we need to do is to craft our own narrative, better promote international communication and work hard to achieve the goal of enhancing our voice and national soft power so as to present a genuine image of China to the world.

We need not worry about the international reputation of a China that continues to reform and innovate and open wider to the outside world, and a China that is committed to ensuring a happy life for all Chinese people and has made great contributions to world peace and development.

The author is former Vice-Minister of Foreign Affairs and Chairperson of the Center for International Security and Strategy of Tsinghua University.