Reporting the truth about China 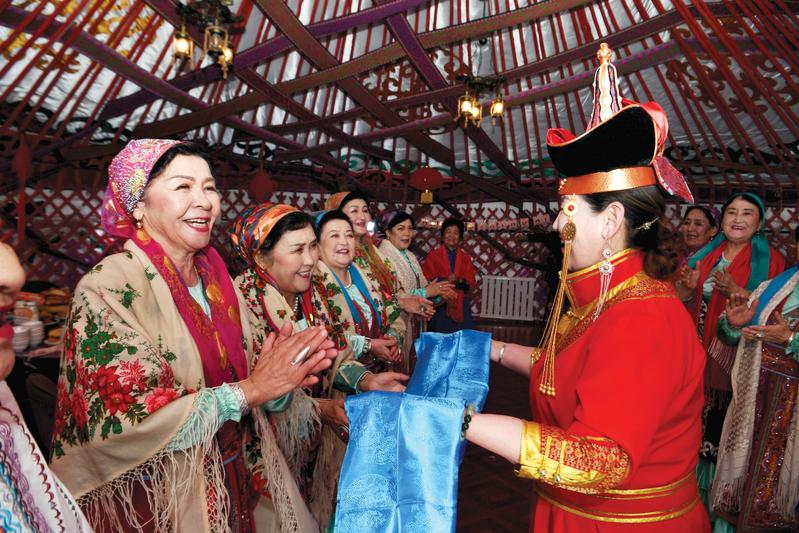 Local residents in Tuoli county of Xinjiang Uygur autonomous region welcome performers from a visiting art troupe on Feb 14. Between 2010 and 2018, the population of the Uygur group rose to 12.72 million from 10.17 million, up about 25 percent and among the fastest groups in the region. (SHA DATI / XINHUA)

‘The world is based on facts, not interpretations”.

This is what Raz Galor, an Israeli entrepreneur and content creator, wrote at the end of his video titled “How to make a ‘BBC-style’ documentary about Wuhan?”, which was posted on China’s video-sharing platform Bilibili on Feb 6.

Galor re-edited his original video to mock the British Broadcasting Corporation for making a documentary that contained disinformation and untruths about Wuhan, the epicenter of the COVID-19 outbreak in China. In the video, he called BBC the Biased Broadcasting China.

His original video was made in November, for which he spent two days in the city, approaching people on the streets, from medical workers to food delivery men and small business owners, to ask them about what they had experienced over the past year.

But with a completely different style of editing and postproduction, the same footage that the viewers, whether on Bilibili or international platforms like YouTube, described as warm and touching in the earlier video was made to show something completely opposite. For example, by applying an ashy and blue filter, the environment was made to look bleak and gloomy.

“A lot of (people I met) were very satisfied with the way they were dealing with this situation (the pandemic). They were very happy with and positive for the future,” said Galor.

A few months later, when Galor saw the video made by BBC about how Wuhan is faring after one year since the outbreak, Galor said he felt the video “had a different purpose” and was not showing what he saw in Wuhan.

“(The BBC documentary) conveyed a message that me and my team were feeling uncomfortable with, given that we have been living in China for so long,” he told China Daily.

By comparing two different styles of editing, Galor said he hopes to show people how simple it is to turn the interviews he did into something very negative and tell the audience of BBC that “there (are) actually other ways to understand China”.

China has repeatedly criticized BBC for its reporting on China-related issues. Just this month, the Information Department of the Ministry of Foreign Affairs lodged stern representations with BBC over its COVID-19 fake news.

On Feb 11, China’s National Radio and Television Administration banned BBC World News from broadcasting in China. The NRTA said in a statement that the channel had violated regulations governing radio and television management, and rules about overseas satellite television channel management, in its China-related reports.

In a statement, BBC said it is “disappointed” with the decision and said it “reports on stories from around the world fairly, impartially and without fear or favor”.

“In the case of the pandemic, facts have been twisted, situation has been angled to give a certain, preconceived message,” Takalvi said.

“If we look at the facts, the achievement that China has made in its fight against the pandemic is obvious. During the Chinese Lunar New Year holiday, most of the new COVID-19 cases were imported,” said Li Renliang, associate professor with the National Institute of Development Administration in Thailand.

“It is unavoidable that some foreign journalists may add their own comments in the reports and view China from a Western perspective. But many measures were taken based on the real situation in China,” Li said, noting that each country has its own unique situation to deal with.

For example, the vocational education and training centers in Xinjiang have equipped people with the skills needed for employment. According to a whitepaper released by the State Council Information Office in September, from 2014 to 2019 the total number of people employed in Xinjiang rose from 11.35 million to 13.3 million, an increase of 17.2 percent.

Yet BBC often refers to those centers as “re-education camps” and said China locks up “hundreds of thousands of Muslims without trial” in Xinjiang. It also reported that women in those centers are subject to systematic sexual abuse and “forced sterilization”.

During a press conference on Xinjiang-related issues held by the local government on Feb 10, Xu Guixiang, deputy director-general of the Communist Party of China Publicity Department of the Xinjiang Uygur autonomous region, said the only Uygur woman that BBC interviewed for the story left China on Sept 26, 2019, and has been willing to act as a chess piece and actor of anti-China forces to falsely claim refugee status.

According to a report by the Global Times, the woman, whose real name is Tursunay Ziyawudun, is a 43-year-old Uygur woman from Xinyuan county, Ili Kazak autonomous prefecture. She never underwent forced sterilization but is inherently infertile, which is known to all her family members.

Xu said the report by BBC saying that women at the centers “have been systematically raped, sexually abused, and tortured” was “sheer nonsense”.

ECI’s Takalvi said BBC’s reporting on China in general and Xinjiang in particular is “a classic case of falsifying the realities”, which he thinks falls drastically short of standards and level of journalism expected from an influential outlet like BBC.

“Xinjiang is a bridge between China and the Muslim world. What the West is trying to do is to turn this bridge into a wall,” said Takalvi, who have visited Xinjiang many times.

“I have met people of all ethnic backgrounds and all walks of life. All the people are living happy, content lives,” said Takalvi. In addition, he said the way China has dealt with extremism and terrorism has brought peace and stability not only to Xinjiang, but also contributed positively to peace and stability in the whole of Central and West Asia.

Takalvi said the biased story about China is out of desperation and is a common thread of propaganda that runs through almost all the media in the West, including BBC.

“The objective is to vilify China, to present China in a negative light, to falsely show China as a power that does not care about human rights,” he said.

Peter Chang, deputy director of the Institute of China Studies at the University of Malaya, said China has provided greater access into the region and must continue to do so.

“The best antidote against the Western media’s misrepresentation is for Beijing to remain open and transparent with regard to the events transpiring in Xinjiang,” he said.

“The country’s ability to lift 700 million out of abject poverty within a span of mere 30 years is an accomplishment unmatched in human history,” Chang said.

Noting development is the top priority for China, Li from NIDA said China’s improvement in protecting human rights is embodied from a macro perspective to protect the benefits of its people as a whole. “This is different from what the West perceives human rights which focuses on individuals,” he said.

“As more and more people start to pay attention to China, they will know the truth,” said Li, adding that enhanced cooperation between Chinese and foreign media and other organizations is also needed to provide more Chinese stories to the world.

“Language continues to be a major barrier for the outside world to understand China,” said Chang.

As a content creator, Galor said he and his team aim to show people China from a different perspective that is much more authentic than most of the reports about China, even though they are not a news media company.

“When it comes to reporting the real situation, I don’t think it should be used as a strong political tool to convey a negative message about the people but it should just show the real truth of what they really see,” he said.

Galor said he plans to provide more content about the village life in China, the elderly and the digital economy, and continue to focus on the life of foreigners in China.

“We should encourage people who are constantly trying to report or explore China from a foreign perspective. The more views we have, the more perspectives we give, the better it is for the audience to judge what’s right and wrong,” said Galor.

During the Chinese Lunar New Year holiday, he interviewed foreigners who stayed in Wuhan and asked them to share what they see there. Using a quote from one of his interviewees, he said: “You don’t have to be pro-China, but you have to understand the truth about China.”