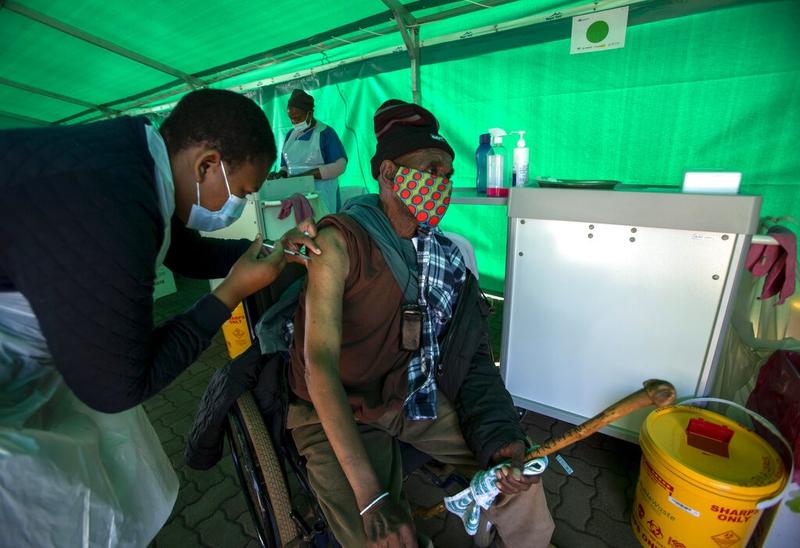 A health worker vaccinates a retiree with the Pfizer coronavirus vaccine inside a tent, during a mass vaccination program for the elderly at the clinic outside Johannesburg, South Africa, May 24, 2021. (THEMBA HADEBE / AP)

South Africa and Kenya have tightened social restrictions to halt the spread of COVID-19 as cases surge in both countries. More transmissible variants and laxity in people's observation of health protocols have contributed to the rise.

South Africa, the most affected country in the continent, is battling a third wave in four of its nine provinces. President Cyril Ramaphosa said it's only a matter of time before the entire country enters a third wave.

Ramaphosa said in an address to the nation on Sunday the country has been recording an average of 3,745 daily new infections over the last seven days, a 31 percent increase over the previous week and a 66 percent jump in cases on the week before that.

South Africa is battling a third wave in four of its nine provinces. In Kenya, the health cabinet secretary, has warned of a possible fourth wave of the coronavirus due to the spread in communities of the B.1.617 variant, which was first found in India

Ramaphosa said the country has doubled its test positivity rate in the past month, from 4 percent to 11 percent. The president blamed the surge on the rising number of social gatherings.

"We have not been as vigilant about wearing our masks all the time. We have not been avoiding crowded places and we have been socializing more," Ramaphosa said. He said more restrictions are necessary to ensure health facilities are not overwhelmed and lives are not lost.

Nationwide curfew hours were expanded from the previous midnight-4 am to 11 pm-4 am. Nonessential establishments like restaurants, bars and fitness centers are required to close by 10 pm.

All gatherings including religious services, political events and social gatherings, as well as restaurants, bars, and taverns, will be limited to a maximum of 100 people indoors and 250 people outdoors.

Kenya on Sunday announced an extension of the nationwide 10 pm to 4 am curfew by another 60 days. In a notice on Friday, Fred Matiang'i, the interior cabinet secretary, said public gatherings remain banned.

Mutahi Kagwe, the health cabinet secretary, warned on Wednesday of a possible fourth wave of the coronavirus in Kenya due to the spread in communities of the B.1.617 variant, which was first found in India. He urged county governments to prepare by ensuring they have enough oxygen supplies in hospitals.

Both Kenya and South Africa are undertaking the second phase of COVID-19 vaccinations. Kenya kicked off jabs for the second dose of the AstraZeneca vaccine on Friday, 12 weeks after the rollout of the first dose. Priority will be given to frontline healthcare workers.