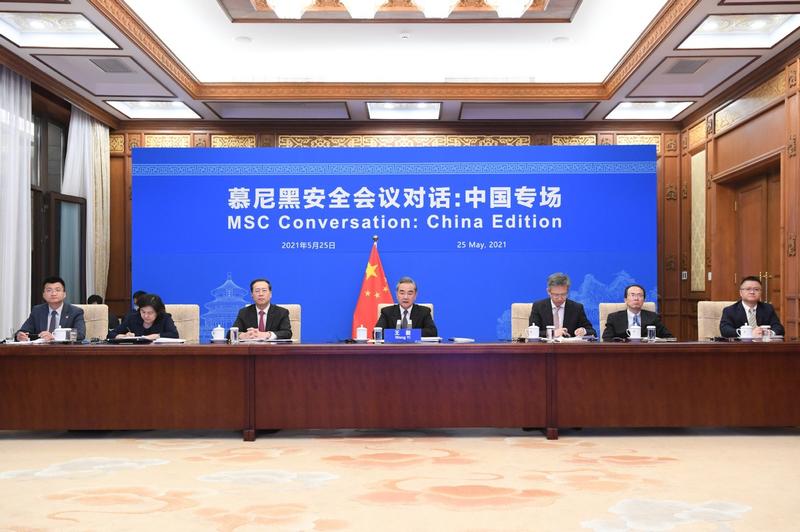 State Councilor and Foreign Minister Wang Yi gives a speech on Chinese foreign policy at a special videoconference in Beijing on May 25, 2021. (PHOTO / XINHUA)

Beijing has voiced strong disagreement with some Europeans defining China as a "rival", warning that stoking China-EU political confrontation and economic decoupling "will not last long".

In particular, the suspended China-EU investment agreement is of great mutual benefit and "is not a gift given by one side to the other", State Councilor and Foreign Minister Wang Yi said.

Wang made the comment while giving a speech on Chinese foreign policy at a special videoconference on Tuesday night with the Munich Security Conference forum.

The event focused on "key global challenges for the relations between China and the West" at a time when China-EU ties have been clouded over in the past few months on topics such as so-called human rights issues in the Xinjiang Uygur autonomous region.

The European Parliament adopted a resolution on May 20 freezing ratification of the landmark China-EU investment agreement after Beijing sanctioned some European politicians for attacking China on topics such as Xinjiang.

Earlier this month, an unnamed spokesperson of the Chinese Mission to the EU said China made "a legitimate response to the EU's unilateral sanctions and confrontation" and "China always has the sincerity to promote cooperation with the EU".

He noted that some European individuals "arbitrarily link issues of different natures to one another" and politicize economic and trade issues, which is "unacceptable" and "will lead nowhere".

In the first four months of this year, China's total trade volume with the EU was 1.63 trillion yuan ($255 billion), a year-on-year increase of 32.1 percent, according to the General Administration of Customs.

Zhou Xiaoyan, a researcher at Tsinghua University, said it took seven years before negotiations on the agreement were concluded in December, both sides made huge efforts, and the pact does "enjoy support within the EU" despite the recent twists and turns.

China and the EU should honor their duties to put the deal to use, endorse the spirit of dialogue and multilateralism, and boost global recovery, Zhou told Xinhua News Agency.

Vice-Minister of Foreign Affairs Qin Gang told EU diplomats based in Beijing at an event on May 7 that China-EU ties conquered headwinds over the past year with fruitful outcomes, and the two sides should stay tuned to their definition as partners.

As terms such as "systemic rival "have been used in EU documents and by researchers to define China in recent years, Wang said Beijing's position has been clear and consistent, as it always views the EU as a partner instead of a rival.

Wang mentioned the successful China-EU teamwork in championing multilateralism over the past few years, as what he called "a superpower"－an indirect reference to Washington－disrupted international order and global governance by willfully quitting international organizations and treaties and imposing unilateral sanctions.

Beijing is ready to work with Brussels as role models in honoring multilateralism, he said.

Speaking on the West's relationship with China, Wang said the general trend of cooperation "has brought huge dividends to both sides and the world" over the past few decades.

Compared with decades ago, the only change is that China has developed remarkably, and if the West views China as a rival and a threat for this, it may look a little narrow-minded, Wang said.

He also dismissed claims that portray a struggle between the two sides as being one between "democracy and authoritarianism".

China enjoys confidence in its institutions as well as an open mind to different cultures, and democracy is a shared value pursued by various countries and the whole of mankind, Wang said.

There is no such entry as "coercion" or "bully" in the dictionary of China's diplomacy, and its lasting commitment to not seeking hegemony, expansionism or coercion is surely "a major contribution to the world's strategic stability", Wang added.

Former German foreign minister Sigmar Gabriel told the forum that the West needs to understand the realities of working with Beijing. "Without considering China's contribution, one can no longer discuss global issues in the 21st century," CGTN quoted Gabriel as saying.