The ‘beads’ that link up HK and mainland

By Li Bingcun in Shenzhen 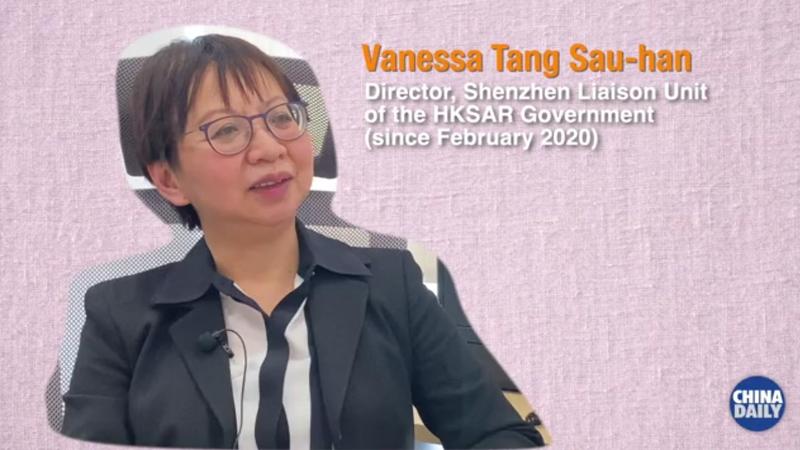 One shows the statutory public holidays in Hong Kong and the other shows those of the Chinese mainland. She’s accustomed to checking the calendars first before contacting people or organizations in either city.

The arrangement dictates the nature of her work — she needs to know the pace of living of residents on both sides, adapt to the different lifestyles and serve as a bridge between them.

Tang took up the post in Shenzhen last year — the 10th anniversary of the unit’s establishment. As the SAR’s first city-level liaison body based on the mainland, it has contributed to the formulation of nearly every major policy involving Shenzhen-Hong Kong collaboration in the past decade.

Tang faces a new landscape in post-pandemic cross-border cooperation, and is poised to lead the unit in exploring further collaboration and bilateral exchanges.

The Shenzhen liaison unit is among a comprehensive network of offices the SAR government has opened on the mainland since 1997. Their responsibilities include strengthening liaison and communication between Hong Kong and the mainland, enhancing government-to-government collaboration, promoting Hong Kong’s trade and commercial relations with its mainland counterparts, as well as facilitating investment and supporting Hong Kong people and enterprises on the mainland. 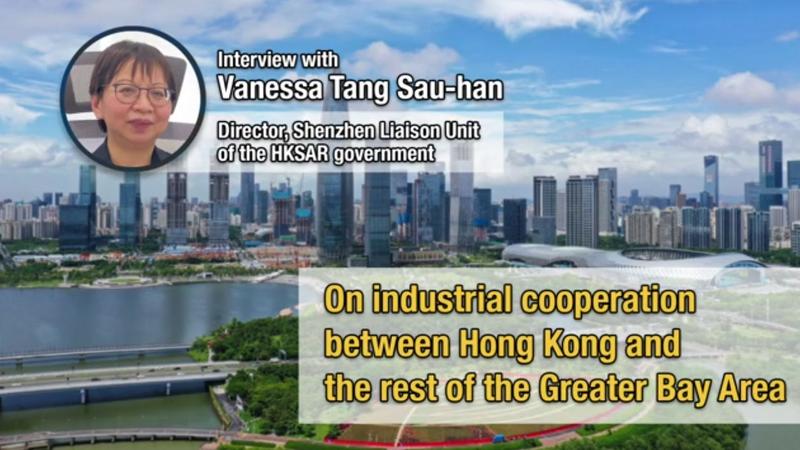 Tang was transferred to Shenzhen in February last year at the height of the pandemic on the mainland. But most of the liaison unit’s routine work, such as organizing activities and visiting agencies, had to be suspended for several months. It wasn’t until April and May that all of its members — two from Hong Kong and two from the mainland — have been able to work together at the office, located in Shenzhen’s Futian district.

For members of the team, even familiarizing with each other isn’t easy. They may have met several times, but it’s still difficult to recognize each other as all of them are wearing face masks.

Although the pandemic in Shenzhen was brought under control in the latter half of last year, restrictions on holding large-scale gatherings and activities remain in place. As a result, the China (Shenzhen) International Cultural Industries Fair — one of the city’s largest events held annually — was put on the back burner for several months and had to go online in November.

Making preparations for setting up the Hong Kong exhibition hall at the event is one of the liaison unit’s most important tasks, and was Tang’s first big assignment in Shenzhen. Given the greater flexibility with online work, the team launched a virtual 3D pavilion showcasing the designs of 20 Hong Kong exhibitors. Covering a wide range of activities, such as travel, working and living at home, the designs drew more than 100,000 clicks.

Aimed at boosting ties with the mainland, the SAR government has opened five economic and trade offices in various provinces since the handover. Each is responsible for enhancing cooperation with five or six neighboring provinces.

In view of the rapid economic development in some mainland cities, the SAR government has established 11 liaison units under the five offices since 2010 to bolster ties with them. The Shenzhen liaison unit was the first to be formed for this purpose. 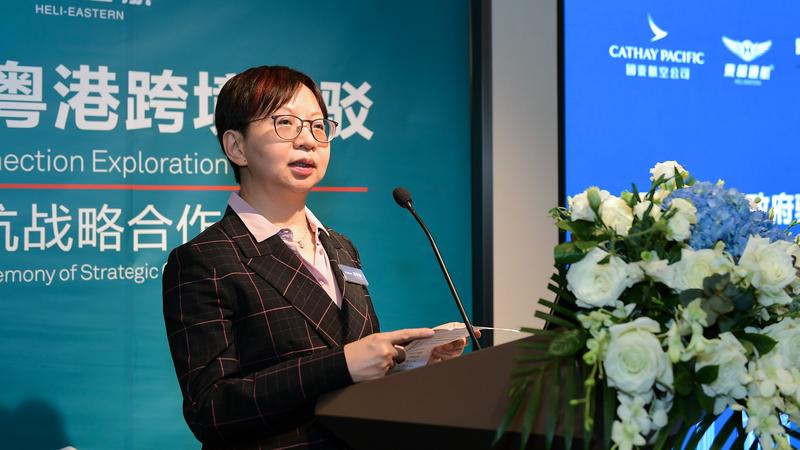 Tasked with propelling Shenzhen-Hong Kong collaboration, the unit strives to build up links between government departments, companies, social organizations, as well as residents of the two cities.

When the unit opened, it was involved in the policy making process of Qianhai — a newly established pilot zone in Shenzhen, which emerged as the poster child of cross-border cooperation. With a series of experimental policies, especially in finance, the zone had attracted more than 11,000 Hong Kong enterprises, and incubated over 200 Hong Kong entrepreneurial teams, as of October.

The unit mainly helps government departments in Hong Kong and Shenzhen to better understand the latest developments on each side, finds the right people to link up with, and promotes policies favorable for cross-border collaboration.

In the past decade, cooperation between both cities has made big strides, covering broader areas and focusing on more issues. Currently, innovation and technology, youth development, as well as the cultural and creative industry, are the key areas for both sides to unleash their potential, said Tang.

The liaison body also helps Hong Kong people to settle in Shenzhen, whether they’re working, studying, or engaging in social or business activities. Besides enlightening them regularly about the mainland’s institutions and policies, Tang’s team helps them to solve complex problems and reflects their views and suggestions to the relevant government departments.

According to Tang, more young entrepreneurs from Hong Kong have gone to the mainland in search of opportunities. Besides the much sought-after information and technology sector, others are engaged in early childhood education, blood sugar testing, and speech recognition and translation. 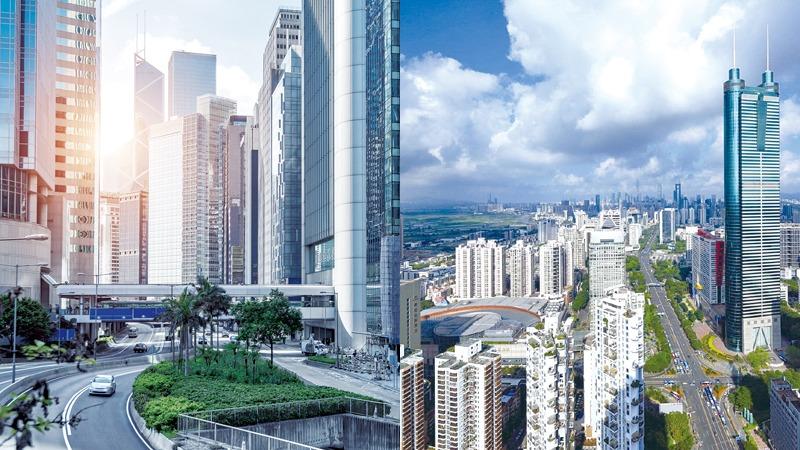 She said the opportunities the youngsters have found for themselves may even be better than those offered by the government. She encouraged more Hong Kong youths to explore the “broad stage” in the Guangdong-Hong Kong-Macao Greater Bay Area’s development.

Before moving to Shenzhen, Tang served at the SAR government’s liaison unit in Xi’an, Shaanxi province, for three years. She said Shenzhen is young, dynamic and always open to changes and innovation — whereas Xi’an is renowned for its ancient culture and history.

“At the forefront of the nation’s reform and opening-up, here in Shenzhen, I can see more rapid and drastic changes, and also the nation’s future development path,” she said.

Having lived on the mainland for four years, Tang has adapted herself quite well to the working and living environment. WeChat has replaced business cards and has become her major communication channel with Hong Kong colleagues in charge of mainland affairs.

There’s also the convenience of making payments or ordering food online, which she relishes. Shenzhen also has more food options, including her favorite Hakka cuisine, she said.

In view of the prolonged quarantine arrangements, Tang has few chances of returning to Hong Kong to see her family or friends although her home in Yuen Long is close to the border. Unperturbed by the travel restrictions, Tang sees it as a chance to better understand and embrace Shenzhen. She cited  Nantou Ancient Town — a revitalization heritage project in downtown Shenzhen — as a good place to explore the city. Only by strengthening connections, she said, would there be more chances for collaboration.

Through their years of cross-border liaison work, Tang and her colleagues serve as “small beads” linking up different parties in Hong Kong and on the mainland. They’re also acting as a window through which the people on either side can have a clearer image of each other.