Long lines form at hospitals, but supplies quickly run out 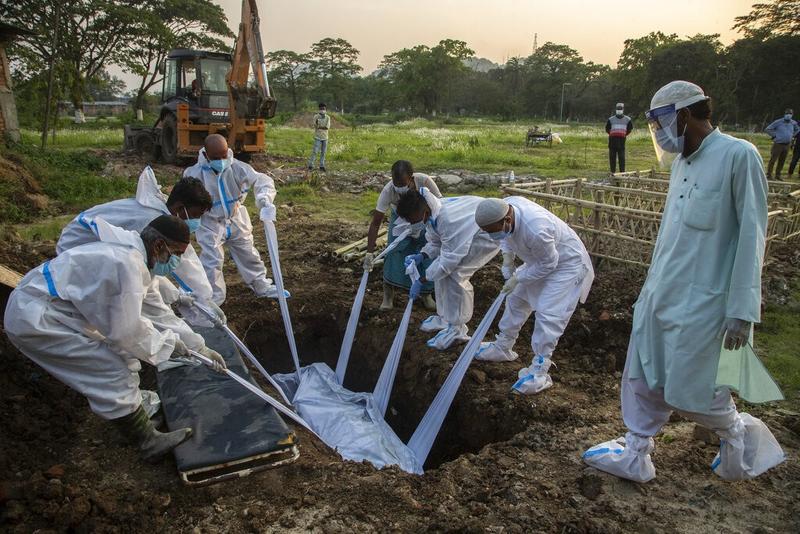 Relatives and municipal workers in protective suit bury the body of a person who died due to COVID-19 in Gauhati, India, April 25, 2021. (ANUPAM NATH / AP)

India is clamoring for oxygen, with the number of COVID-19 cases in the country rising to record levels.

Patients at crowded hospitals are waiting for fresh supplies, their anxious relatives forming long lines in areas where oxygen is provided and at makeshift vehicles supplying it.

Suresh Kumar, director of Lok Nayak Jai Prakash Narayan Hospital in New Delhi, said on Sunday: "The number of people in the lines started to drop when we were down to the last few minutes of our supplies. A tanker carrying oxygen reached us five minutes ago, but it only has two tons of supplies, which will last us another two hours."

Several major hospitals in the Indian capital tweeted that they had less than two hours of oxygen left, while others in the city reported that they were suspending new admissions.

A senior doctor at Fortis, a major healthcare provider in India, said, "We are running on backup supplies, waiting for new ones to arrive."

Oxygen machines from China are on their way to India, while those that have already arrived are being prepared for immediate use. Medical supplies flown in from countries such as Singapore, Saudi Arabia and the United Arab Emirates, among others, have been sent to emergency units.

Each day has brought new heartbreak and an increased sense of helplessness in India.

Instead of the number of COVID-19 cases falling, the country has been setting records for newly confirmed infections and deaths since April 22,when 314,835 cases were reported in a 24-hour period, the highest single-day national figure globally since the pandemic emerged last year.

India, with a population of 1.39 billion, recorded 360,000 new infections－a global record－and more than 3,000 deaths on Wednesday.

Earlier, he told a virtual briefing in the Swiss city of Geneva, "The situation in India is a devastating reminder of what the virus can do."

However, the worst may be yet to come. 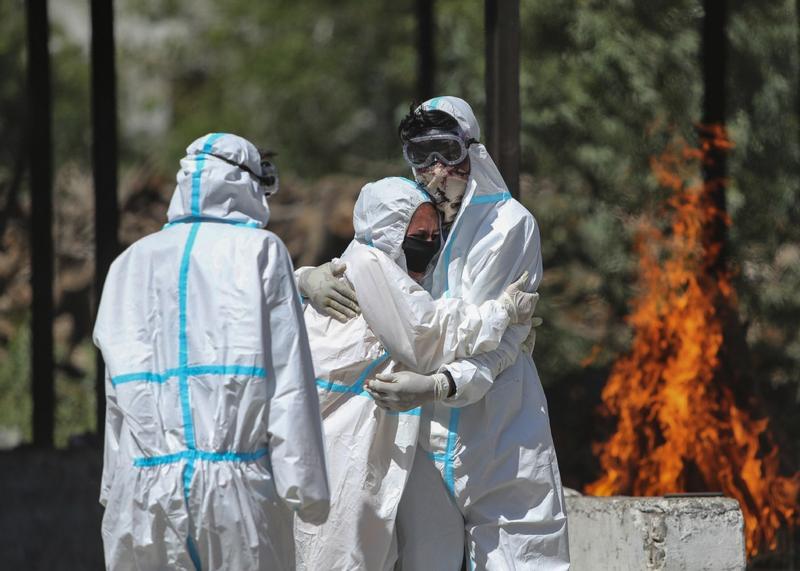 A relative of a patient who died from COVID-19 is consoled in Jammu on Sunday. (CHANNI ANAND / AP)

Karori Singh, Emeritus Fellow and former director of the South Asia Studies Centre at the University of Rajasthan, said cases may continue to rise for the next two weeks, even though adequate preventive measures have been taken and medical services revamped.

Bhramar Mukherjee, an epidemiologist and biostatistician at Michigan University in the United States, said that when cases peak in mid-May, India would see 800,000 to 1 million infections per day and deaths would peak at the end of next month, at 4,500 per day.

Several experts and organizations have made similar predictions for India's accelerating second wave of COVID-19 cases and deaths.

The Institute for Health Metrics and Evaluation in Seattle, US, pointed out in statistical reports that the number of cases and deaths in India would peak in mid-May, before falling sharply.

Unlike the wave of infections last year, which mostly hit poor people reluctant to visit clinics, the new wave has affected the middle class, who are quickly exhausting hospital resources.

Long lines of patients and relatives have formed outside hospitals in cities such as New Delhi, Kolkata and Mumbai. Major healthcare facilities in many parts of the country have been battling acute shortages of oxygen for more than a week.

At one hospital in New Delhi, doctors said 20 patients in a critical care unit died on Sunday after oxygen pressure dropped. The doctors blamed the deaths on the city's acute shortage of oxygen.

Crematoriums and burial grounds are being overwhelmed.

At Nigambodh Ghat, one of the biggest crematoriums in New Delhi for COVID-related funerals, some 120 bodies were cremated on Saturday, the highest daily figure to date this year, according to Suman Gupta, general secretary of the facility.

"From zero COVID-related cremations on April 1, the number has now reached around 50 per day," Gupta said.

In response, the Indian government decided to import oxygen supplies and help leading domestic manufacturers increase production of the gas and life-saving drugs. State governments have been told to crack down heavily on anyone caught hoarding supplies.

Indian railways and naval ships are transporting oxygen and life-savings drugs to areas with inadequate supplies. 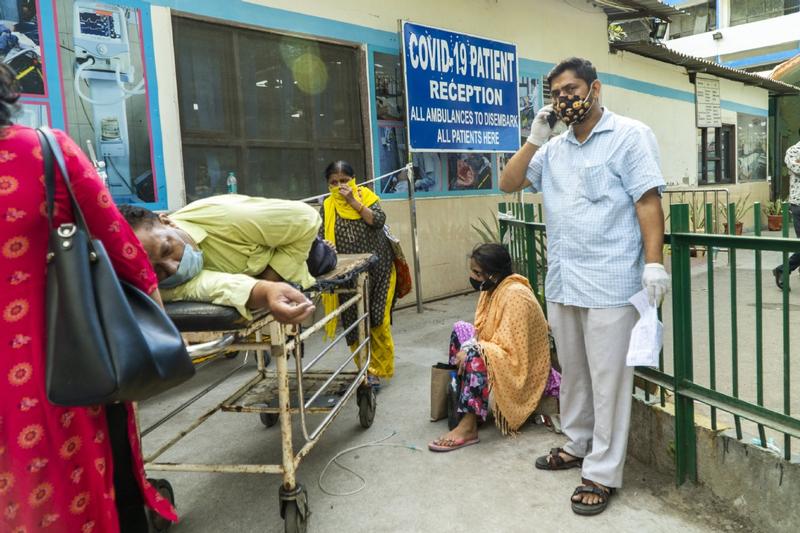 Relatives wait next to a patient being admitted to a hospital in New Delhi. (MAUDE BRULARD / AFP)

With the surge in cases showing no signs of abating, several states, including Delhi, have extended lockdowns, night curfews and created new mini-containment zones in efforts to contain the virus.

However, the central government has been accused of letting its guard down too early and focusing too heavily on the economy.

In a radio address on Sunday, Prime Minister Narendra Modi said, "We were confident and our spirits were up after successfully tackling the first wave, but this storm has shaken the nation."

On April 20, Modi voiced reluctance to impose another lockdown, saying this should be used as a last resort, as there should only be a minimal adverse impact on people's livelihoods.

A senior Health Ministry official, who declined to be identified, said the pandemic was under control in January, but since then, healthcare facilities had not been expanded, and now people were paying a heavy price for this.

Mohammed Saqib, secretary-general of the India China Economic and Cultural Council, agreed with Modi, stating: "Imagine a situation when virtually the entire country slips into shutdown mode for an indefinite period. People's lives and livelihoods would take a hit."

It is much better for people to stay safe by following protocols, Saqib added.

Prasun Dutta, an independent power sector analyst and consultant based in New Delhi, said, "Memories are fresh of the earlier lockdown, which was introduced on March 25 last year, and the heavy toll it took on businesses, the economy and jobs."

He said that during the protracted nationwide lockdown more than two-thirds of businesses in the country went through hard times as a result of reduced cash flows.

Opposition parties have accused the government of inadequate planning and adopting an inappropriate strategy for preventing and controlling the virus.

Shahid Jameel, a virologist and director of the Trivedi School of Biosciences at Ashoka University in New Delhi, said the surge in cases has been blamed on people ignoring social distancing and not wearing face masks in crowded places.

Singh, from the University of Rajasthan, cited a number of possible factors for the faster spread of the second wave, including political rallies staged during local elections, along with religious festival celebrations attended by millions of people, most of them not wearing face masks. 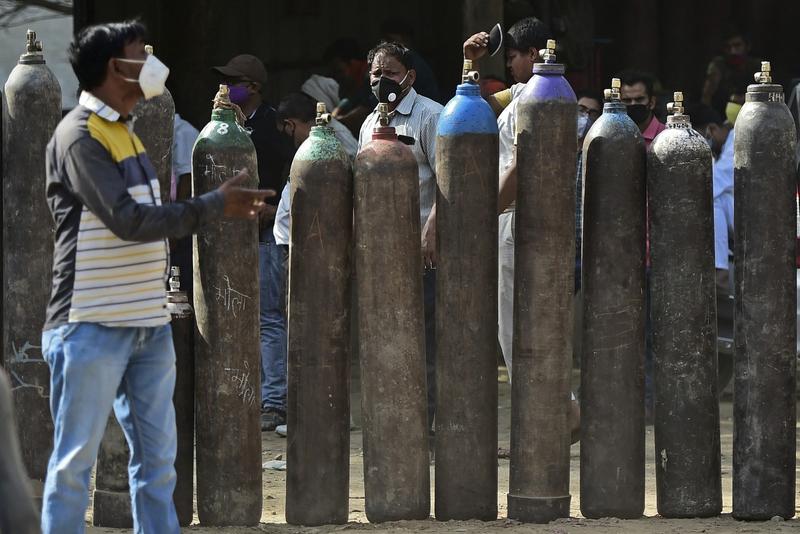 Normalizing business activities without strict observance of protocols, inadequate self-quarantine measures due to family reasons, over-confidence in large-scale vaccinations, and changing behavior because of the false belief that the pandemic is under control, could also be to blame, Singh said.

Ruklanthi de Alwis, senior research fellow at SingHealth Duke-NUS in Singapore, said lax preventive measures in tandem with nationwide election rallies and popular festivals in India are among the reasons for the rise in infections. She also singled out the emergence of a highly infectious new SARS-CoV-2 variant in the country.

In Maharashtra, India's richest state and home to its financial hub Mumbai, a "double mutant" strain named B.1.617 was detected in 220 of 361 COVID samples collected from January to March, according to the National Institute of Virology. The variant has reportedly been observed in more than 20 countries and regions, including Hong Kong, although scientists have yet to determine its impact.

Singh said the new strain of the virus is believed to be mutating rapidly and this is becoming difficult to prevent, as it appears to be more asymptomatic than others.

"The biggest challenge is to contain the virus in order to save lives," he said.

The Indian government has adopted safety and preventive measures for religious gatherings. Further restrictions and localized lockdowns are likely to be imposed in a number of states, and new guidelines may be issued for electoral campaigns and election-related activities.

"However, I don't think the government will opt for a full-scale lockdown," Singh said.

Anup Kumar Sinha, an economist, said," March 2020 and April 2021 are different times. In March 2020, we were virtually defenseless against the virus, and a lockdown was perhaps the only option, but now with the vaccine coming in, we are in a somewhat better position." He added that the second wave would deal another cruel blow to migrant laborers.

Modi has urged Indian citizens to be vaccinated and exercise caution.

Samiran Panda, head of the epidemiology and communicable diseases division at the Indian Council of Medical Research, said the government has taken a series of measures, including adding people age 18 and older to the nation's inoculation campaign, which takes effect on Saturday.

The production and supply of vaccines can be accelerated, as the US has spoken of removing export bans on vaccine materials, Panda added.

However, a senior doctor at the All India Institute of Medical Sciences said a supply shortage, which is already affecting the vaccination drive, could slow it further.

The Health Ministry said that as of Sunday, 140 million vaccine doses had been administered in India.