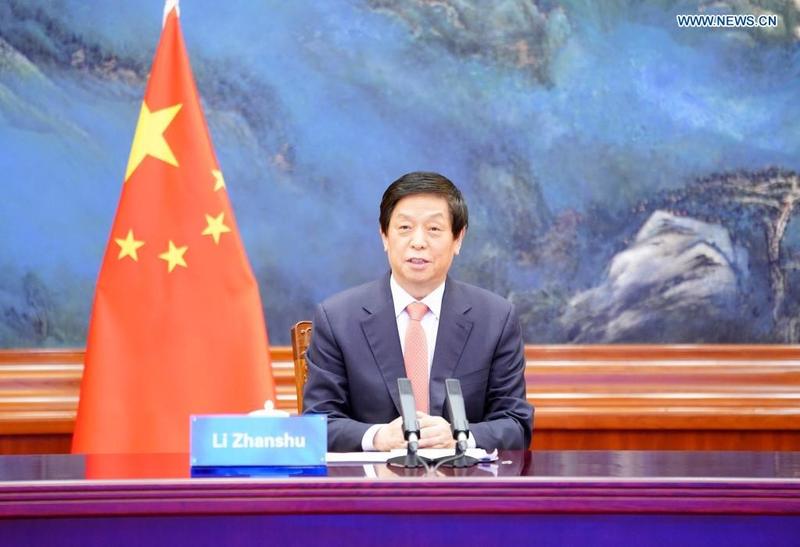 China's top legislator Li Zhanshu pledged on Tuesday to enhance the nation's cooperation with Mexico in order to promote the comprehensive strategic partnership between the two countries.

Li, the chairman of the Standing Committee of the National People's Congress, made the remark in talks via video link with Oscar Eduardo Ramirez Aguilar, the speaker of Mexico's Senate.

China greatly values its ties with Mexico, the nation's top legislator Li Zhanshu said, adding that the nation will remain committed to promoting friendship with Mexico and supporting Mexico's economic and social development, regardless of the shifts in the international situation

China greatly values its ties with Mexico, Li said, adding that the nation will remain committed to promoting friendship with Mexico and supporting Mexico's economic and social development, regardless of the shifts in the international situation.

China and Mexico, both of which are major developing countries and emerging markets, offer important development opportunities to each other, Li said, urging the two sides to maintain and enhance high-level political mutual trust.

Hailing the strong resilience shown in pragmatic cooperation against the backdrop of the COVID-19 pandemic, Li said that vaccine cooperation is a highlight of anti-pandemic cooperation between the two countries.

The two countries have taken practical measures to promote the building of a community of health and have worked together to set an example in the global fight against the virus, Li said. China had sent five shipments of vaccines to Mexico as of last month.

China welcomes Mexico to participate in jointly building the Belt and Road, and Li urged the two sides to synergize their development strategies, deepen people-to-people exchanges and enhance coordination to jointly uphold multilateralism.

Li said the NPC is willing to continue to enhance cooperation with Mexico's legislature in order to promote the implementation of the important consensus reached by the two countries' leaders and the two nations' bilateral cooperation agreements.

Li also urged the two sides to enhance their exchange of experience in implementing the rule of law, achieving economic development and improving people's livelihoods, and better coordinate on multilateral issues to defend the common interests of developing countries.

Ramirez said Mexico regards China as an important partner for cooperation in the Asia-Pacific region, and thanked China for providing vital support to Mexico in its COVID-19 response.

Mexico is ready to make positive contributions to promoting ties with China, advancing pragmatic cooperation and deepening friendship between the two peoples, he added.