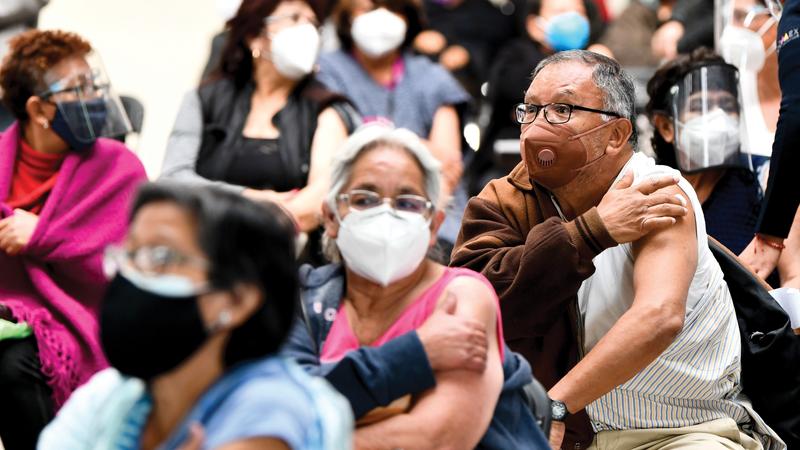 Citizens inoculated with Sinovac COVID-19 vaccines sit in an observation area at a vaccination site in Ecatepec, Mexico, on Feb 20. (XIN YUEWEI / XINHUA)

Mexico has a deal to co-produce, along with Argentina, AstraZeneca’s COVID vaccine for distribution in Latin America, and the country has also been working to develop a homemade vaccine. But progress has been slow, making it reliant on imported jabs for inoculating its population.

Problems in securing export shipments from the US have also led to Mexico increasingly turn toward Chinese and Russian vaccines.

“The Mexican government trusted in (former US president) Donald Trump’s help to ship vaccines out of the US. However, given the change of administration, help was denied and Mexico turned to China and Russia for vaccines,” said Pedro Irigoyen, a regulatory affairs consultant in Mexico City.

For months, Mexico has been requesting AstraZeneca vaccines from its neighbor the US, which has stockpiled millions of doses, even though the US Food and Drug Administration is yet to approve that particular vaccine for use within the country.

The export delays in the US lasted for months. Mexico’s foreign secretary, Marcelo Ebrard, announced on March 18 that the northern neighbor had agreed to export 2.5 million doses, yet the timing is still uncertain.

With a stalled vaccination program due to slowdowns in domestic manufacturing and the lack of US exports, Mexico has reached out to China and Russia for the jabs.

“The sourcing strategy shifted away due to the shortage and the lack of AstraZeneca vaccines. However, (in) January, there was no strategy to approach China and it wasn’t clear that the Chinese vaccines were going to be approved anytime soon,” said Daniel Dominguez, co-founder of Allbiotech, a nonprofit organization that aims to promote the development and adoption of biotechnology in Latin America.

“The authorization by COFEPRIS to the Chinese manufacturers was granted given the situation of the hospitals which were almost out of capacity,” said Alberto Padilla, an independent journalist from Mexico City. “Solidarity between Mexico and China to cope with the healthcare emergency” helped this happen, Padilla said, adding that the vaccine cooperation marks a new chapter in the bilateral relationship.

Chinese vaccine manufacturers are already supplying the Latin American market. A partnership between Cansino and Drugmex, a Mexican pharmaceutical company, makes it possible for vaccines to be packaged at a plant in Mexico. Five million doses of Cansino’s vaccine have already arrived in the country and are being packaged and distributed daily.

“Given the increase of information about the safety and efficacy of the Chinese vaccines and following the approval of Sinovac’s and Cansino’s vaccines by COFEPRIS, people have started accepting the Chinese jabs, just like the others,” said Irigoyen, the regulatory affairs consultant.

On March 13, Mexico received its biggest-ever shipment of vaccines from Sinovac, which helped speed up the nation’s vaccination campaign.

“Today we receive the largest shipment of vaccines; a million doses of Sinovac. The vaccination plan accelerates the pace. Thanks Sinovac and the People’s Republic of China!!” tweeted Ebrard, the Mexican foreign secretary.

Sinovac’s Coronavac is easier to store and transport than other vaccines in the market that have to be kept at sub-zero temperatures.

With relative ease of transport, Mexico plans to use its shots for a national immunization campaign in harder-to-reach rural areas.

“The army, the navy and the national guard are in charge of the vaccination strategy in Mexico,” said Padilla. “Sinovac’s and Cansino’s vaccines are being used mainly in remote areas, given the fact that they don’t require ultra-freezing conditions and they can bear high temperatures.”

Mexico, with 126 million people, has already vaccinated more than five million people. The country is also using Sputnik V, from Russia, as well as a vaccine co-developed by Pfizer and BioNTech.

Padilla said Mexico is still following closely concerns surrounding potential adverse events from AstraZeneca’s vaccine, which caused temporary suspensions of the vaccine in some European countries. Mexico has yet to make a decision on the vaccine despite the US commitment to export millions of doses.

“In Mexico and in a great part of Latin America, Chinese jabs have been administered at a large scale,” said Padilla. “They are being used in Chile and Peru, given to over 6,000 indigenous tribes in Brazil and achieving emergency approvals in Colombia, Uruguay and other countries, contributing to protecting lives from developing countries.”