Modi under fire for campaigning as India reels from virus deaths 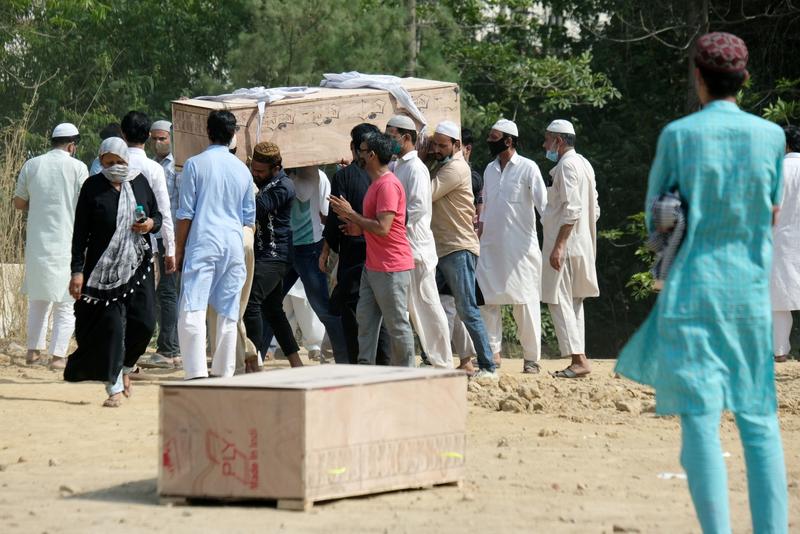 India now has the world’s fastest-growing COVID-19 caseload, adding 273,810 new infections and 1,619 deaths on Monday, leaving it behind only the US in terms of total numbers

Modi avoided wearing a mask at a campaign rally on Saturday, saying “I’ve never seen such huge crowds” at an event in West Bengal. That night he said “India had defeated COVID-19 last year and India can do it again” following a virtual meeting with health officials who spoke of critical shortages of drugs, vaccines and other supplies in a nation that has seen a string of new daily records in the past two weeks.

Leaders of key states lashed out at Modi over the weekend, while the opposition Congress party called off campaigning in West Bengal due to the virus surge. Maharashtra chief minister Uddhav Thackeray, whose state includes India’s financial center, said on Saturday he tried calling Modi to address shortages of oxygen and the drug Remdesivir -- but was told the prime minister was too busy addressing rallies.

Even a former finance minister in Modi’s ruling Bharatiya Janata Party blasted him. The prime minister’s “delight” at the large crowd on Saturday “could have come only from a person who is completely insensitive,” Yashwant Sinha, now chairman of the newly created United Democratic Alliance party, said on Twitter over the weekend. “I deplore his remarks.”

A spokesman for the prime minister’s office wasn’t immediately available for comment.

India now has the world’s fastest-growing COVID-19 caseload, adding 273,810 new infections and 1,619 deaths on Monday, leaving it behind only the US in terms of total numbers. India’s benchmark stock index slumped the most in Asia on Monday as investors worried the high infection rate would hurt the economy and corporate profits, while the capital was set to go into a weeklong lockdown from Monday night in an attempt to curb the spread.

The growing gap between Modi’s optimism in fighting the virus and the reality on the ground is particularly evident in Delhi, one of the hardest hit places in India. “They killed my son,” one man sobbed outside a crematorium in the capital Saturday.

It’s not yet clear whether the grim scenes will dent Modi’s enduring popularity with voters, who re-elected him in a landslide for a second term in 2019 and have largely stuck with him after he imposed a sudden country-wide lockdown last year that pushed the economy into its first recession in decades. Five states, including West Bengal, will count votes in elections on May 2.

While it’s “too early to say” if Modi will get hit at the polls this time, “certainly many more people are expressing their dissatisfaction than was the case even two months ago,” said Neerja Chowdhury, a New Delhi-based journalist and political commentator who has written about Indian politics for three decades.

Either way it amounts to an abrupt change in fortunes for India, which had only last month been hailed for providing vaccines to poorer neighboring countries. Now the world’s biggest manufacturer of vaccines is looking to import shots to mitigate a surge that occurred shortly after Modi’s government allowed large election gatherings and gave the green light to a religious festival that attracted a million devotees.

In Punjab, Chief Minister Amarinder Singh criticized Modi for sending millions of doses to other nations while India’s own immunization program has administered nearly 123 million jabs -- enough so far to give the full two doses to only 1.2 percent of the country’s 1.4 billion people. Singh also condemned the federal government for failing to approve four oxygen plants in his state since applications were submitted last year.

Modi’s government has also lashed out at state chief ministers from other parties over the pandemic response. Over the weekend, Railways Minister Piyush Goyal blasted Thackeray, the leader of Maharashtra, for “shameless politics” in requesting more oxygen and said state leaders should manage oxygen demand.

“The demand-side management is as important as the supply-side management,” Goyal said. “Controlling COVID-19 is the responsibility of state governments.”

The army has stepped in to help treat sick patients, with the military’s Medical Corps running a 250-bed hospital established in New Delhi. Still, outside hospitals and across social media, the desperate search for life-saving treatment and the wail of ambulance sirens punctuated the quiet of the capital’s weekend lockdown.

‘We are being lied to’

“Urgently need a bed in Mayur Vihar Phase 1 for friend ... His oxygen level is coming down alarmingly, need immediate hospitalization. Please help if possible,” Niranjan Sahoo, an analyst at a government-funded research group, tweeted on Saturday.

The calls for help on Twitter, echoed across the country, reflected the pain of well-to-do Indians who have usually been able to bypass the disarray of the public health system and pay for better care. Meanwhile, images and reports from government hospitals showed the fear and distress sweeping through the country’s lower-income families.

Kamal Kumar took his 53-year-old mother to six hospitals across Delhi as her breathing became more and more labored in a frantic bid to find an intensive-care bed with a ventilator. In the end it was too late, he said while standing at the Nigambodh Ghat crematorium on the banks of the Yamuna River. He waited to perform Hindu rites over her body before it was set to burn.

“We are being lied to -- there are no hospitals, no beds, no oxygen,” said his uncle Vinay Kumar. “In the emergency room there were three-to-four people lying on a bed. People on the floor. One doctor was desperately running between patients.”