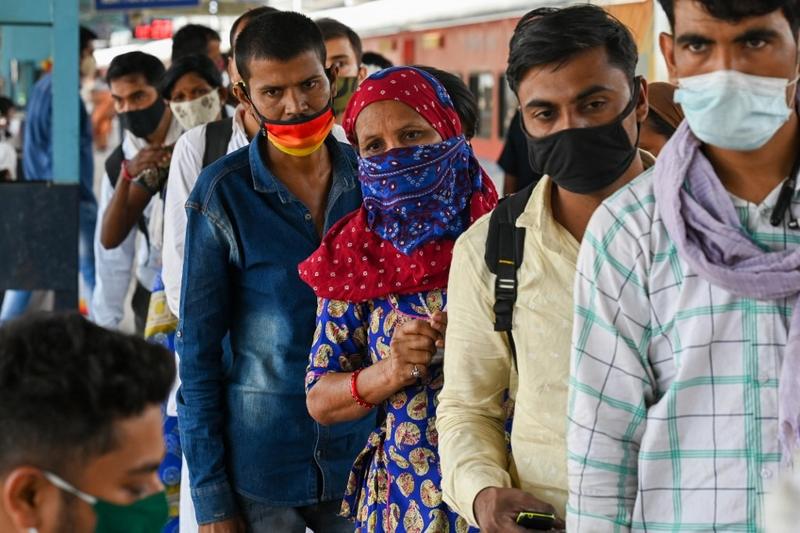 Passengers queue up for the COVID-19 medical screening after arriving at a railway platform on a long distance train, in Mumbai on April 14, 2021. (PHOTO / AFP)

DHAKA/ ANKARA / JERUSALEM - Hundreds of thousands of ash-smeared ascetics and devout Hindus jostled to take a dip in the Ganges during a religious festival on Wednesday, hoping to wash away their sins, as India reported another record surge in coronavirus infections.

As huge crowds made their way towards the river on a special day of bathing during the weeks-long “Kumbh Mela” festival, health authorities had to pull back a COVID-19 testing crew.

“We have moved away our sampling team to avoid a stampede-like situation,” said S.K. Jha, chief medical officer of the northern city of Haridwar, where the event is being held.

After reporting less than 10,000 cases per day earlier this year, India has been the world's worst-hit country since April 2. The government blames here a widespread failure to heed curbs on movement and social interaction.

The rise in cases comes as India’s richest state, Maharashtra, the epicentre of the national second wave, is due to enter a full lockdown at midnight local time (1830GMT) until the end of April to contain the spread. The state accounts for about a quarter of the country’s total coronavirus cases.

On Wednesday, India’s commercial capital Mumbai was bustling with shoppers, stocking up before the lockdown comes into effect.

British Prime Minister Boris Johnson has reduced the length of his trip to India later this month because of the COVID-19 situation in the country, his spokesman said on Wednesday, adding he would meet Prime Minister Narendra Modi.

“We’ve been in close contact with the Indian government about the PM’s upcoming visit in light of the COVID situation in India. As a result of these discussions the prime minister has made the decision to reduce the length of the visit,” he told reporters.

In another development, the Indian government Wednesday announced it has cancelled class 10 board exams and postponed class 12 exams in wake of surging COVID-19 cases.

"The board exams for class 10 to be held from May 4 to June 14, 2021, are hereby canceled. The results of the class 10 board will be prepared on the basis of an objective criterion to be developed by the Board. Any candidate who is not satisfied with the marks allocated to him/her on this basis will be given an opportunity to sit in an exam as and when the conditions are conducive to hold the exams," a statement issued by the federal education ministry said.

The pandemic has so far claimed 2,533 lives in Afghanistan since February last year, including one death in the past 24 hours, the ministry said in a statement.

According to Brunei's Ministry of Health, Case 220 is a 39-year-old man who arrived in the country from Egypt via Kuala Lumpur on April 7 and was quarantined upon arrival. Investigation and contact tracing have confirmed no close contacts for this case.

Case 221 is a 35-year-old man who is the husband of Case 215. Both of them had undergone self-isolation at the National Isolation Center upon arrival in the country on March 24. When Case 215 was confirmed positive on April 7, her husband's test result was negative initially but turned positive after another routine test on April 12 during quarantine. He did not show any symptoms of infection.

Vietnam recorded 19 new COVID-19 infections on Wednesday, raising the total confirmed cases in the country to 2,733, according to the country's Ministry of Health.

The new cases included two foreign experts and 17 Vietnamese citizens who recently entered the country from abroad and were quarantined upon arrival, said the ministry.

As many as 2,445 patients have recovered, the ministry said, adding that over 38,700 people are being quarantined and monitored.

Australian Trade Minister Dan Tehan will travel for face-to-face talks with ministerial counterparts in Germany, France and Brussels from Thursday, after the European Union restricted exports of COVID-19 vaccines.

The talks will address “the supply of EU-produced COVID-19 vaccines that Australia has contracted and how we can work with the EU to enhance the global supply of vaccines,” Tehan said in an emailed statement.

According to the ministry, 5,747 more people were discharged from hospitals, bringing the total number of recovered patients to 1,431,892.

The Indonesian capital is extending its COVID-19 inoculation drive to the general public by allowing those accompanying the elderly to also receive the shot, according to the provincial government.

The initiative would enable Jakarta achieve its goal of vaccinating over 900,000 people, the government said in a statement. Each person between 18 and 59 years old would also get the vaccine when accompanying two people aged 60 and above to receive their first dose.

In a grim landmark, Bangladesh on Wednesday reported 96 more deaths from COVID-19, the highest daily spike, bringing the death toll to 9,987.

The official data showed that 24,825 samples were tested in the last 24 hours across Bangladesh.

Cambodia decided to extend a night curfew in capital Phnom Penh for another two weeks from April 15 to 28 after the number of new COVID-19 cases continues to rise.

"All kinds of travelling in Phnom Penh must be temporarily prohibited from 8 p.m. to 5:00 am local time," Phnom Penh Municipal governor Khuong Sreng said in a decision on Tuesday.

He said the ban provides an exception for those traveling for emergency health reasons or emergency situations, logistics and work for the public good.

The governor added that all food stalls, restaurants, cafes and soft drink shops are not permitted to let customers eat or drink on their premises, but allowed to sell food for takeaway or delivery.

He said all gatherings including gatherings for eating food or drinking alcohol must be temporarily suspended, except for gathering among family members in their houses.

Thailand reported on Wednesday 1,335 new COVID-19 cases, the biggest daily rise since the start of the pandemic and the third record rise this week, as the country struggles with a new wave of infections.

No new deaths were reported. The new cases took the total number of infections to 35,910, with deaths remaining at 97.

Turkish President Tayyip Erdogan on Tuesday announced tightening restrictions to curb the rise in COVID-19 cases, imposing a "partial closure" for the first two weeks of the Muslim holy month of Ramadan.

"The recent rise in the number of infections and deaths, especially in big cities, has forced us to tighten up measures once again," Erdogan said at a press conference after a cabinet meeting.

The hours of weekday curfew will be extended, intercity travel will be banned excluding urgent cases, and people aged below 18 and over 65 will be banned from public transport, he said.

Cafes and restaurants will only provide delivery and takeaway services. Indoor activity venues such as wedding halls, sports centers and game halls will close, while most of the grades in schools will return to distance learning. Weekend curfews will continue in high-risk cities.

The government will introduce flexible working hours for public servants, and the private sector will also be encouraged to do the same, the president said.

These measures will take effect on Wednesday evening and continue for the first two weeks of Ramadan, Erdogan said, adding that the restrictions could further tighten in the second half of Ramadan if the spread of the virus is not under control.

ALSO READ: Israel to allow limited entry of foreign tour groups in May

Israel's Ministry of Health reported 206 new COVID-19 cases on Tuesday, raising the total infections in the country to 836,334.

The death toll from the virus rose by five to 6,309, while the number of patients in serious conditions decreased from 250 to 231, out of 367 hospitalized patients.

This is the lowest number of patients in serious conditions in Israel since July 17, 2020 when it stood at 220.

The total recoveries in Israel rose to 826,768 after 287 newly recovered cases were added, while the number of active cases decreased to 3,257.

Meanwhile, 593 more recovered from the virus, bringing the overall recoveries to 170,787, while the fatalities increased by five to 340, according to a ministry statement quoted by QNA.

Meanwhile, the number of deaths from the virus increased by 35 to 6,738.

Lebanon launched, a day earlier, its vaccination campaign for media professionals, security forces, and public sector employees. The campaign will start by next week.

The Iraqi Ministry of Health reported on Tuesday 8,179 new coronavirus cases, raising the total nationwide infections to 941,078, while the ministry warned of the seriousness of the epidemiological situation in the country.

The new cases included 2,749 in Iraqi capital Baghdad, 1,038 in Basra, 572 in Sulaimaniyah, 562 in Wasit, and 477 in Erbil, while the other cases were detected in other provinces, the ministry said in a statement.

South Korea has recorded 731 new coronavirus cases, the Korea Disease Control and Prevention Agency (KDCA) said on Wednesday, as the country battles to stem the number of infections with more testing and vaccination efforts.

The daily number of infections hovered in triple figures since Nov. 8 last year due to small cluster infections in Seoul and its surrounding Gyeonggi province as well as imported cases.

Of the new cases, 245 were Seoul residents and 238 were people residing in Gyeonggi province.

Seventeen cases were imported, lifting the combined figure to 7,882.

A total of 651 more patients were discharged from quarantine after making full recovery, pulling up the combined number to 101,983. The total recovery rate was 91.53 percent.

The Lao Ministry of Health on Wednesday reported one more confirmed case of COVID-19, bringing its total tally to 53, including 49 recoveries.

Deputy Director General of the Department of Communicable Diseases Control under the Lao Ministry of Health, Phonepaserd Sayamoungkhoun, told a press conference held in the Lao capital Vientiane that the new case is a 25-year-old woman, who returned to the country from Thailand.

The pandemic has so far claimed 2,533 lives in Afghanistan since February last year, including one death in the past 24 hours, the ministry said in a statement.

The death toll climbed to 15,447 after 162 more patients died from the viral disease, the DOH said.

The coronavirus spread has not slowed down, Health Undersecretary Maria Rosario Vergeire said in an online briefing.

Mongolia reported 1,220 new COVID-19 cases in a 24-hour span, a new record and the first time with more than 1,000 daily cases, the country's National Center for Communicable Diseases said Wednesday.

A total of 10,827 tests have been conducted in the last 24 hours across Mongolia, and 10 of the latest confirmed cases were imported, the center said in a statement.

New Zealand reported two cases of COVID-19 in managed isolation and no new cases in the community on Wednesday.

The two newly imported have remained in managed isolation and quarantine facilities in Auckland, according to the Ministry of Health.