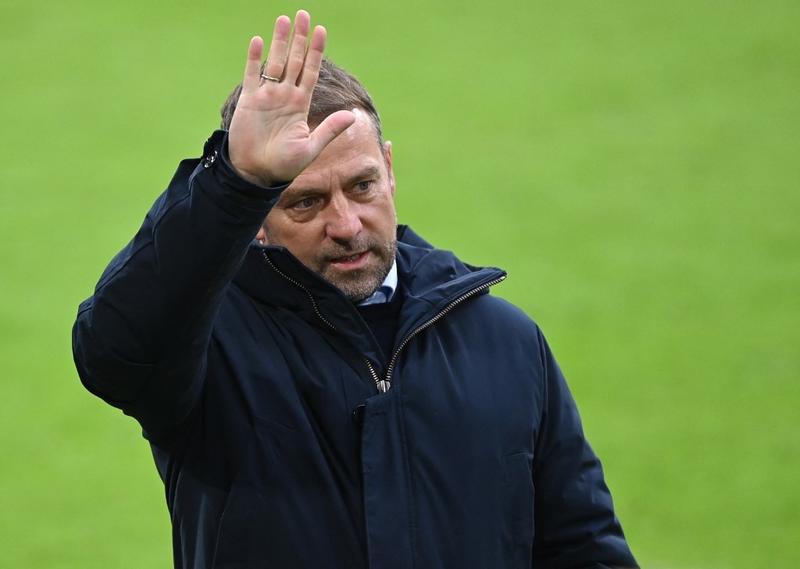 Bayern Munich carved out a crucial 3-2 win over VfL Wolfsburg to stay on course for a record-extending ninth consecutive league title on Saturday but their victory was eclipsed by coach Hansi Flick's announcement he will leave at the end of the season.

The 56-year-old, who took over in November 2019 and led the Bavarians to a run of six domestic and international titles in the 2019/2020 season, said he had told the club and team of his wish to depart

The 56-year-old, who took over in November 2019 and led the Bavarians to a run of six domestic and international titles in the 2019/2020 season, said he had told the club and team of his wish to depart despite a contract running to 2023.

Earlier, Bayern teenager Jamal Musiala scored twice in the first half to steer them to a nervous win at third-placed Wolfsburg as they moved seven points clear at the top of the Bundesliga standings with five matches left to play.

Three days after their Champions League quarter-final elimination by Paris St Germain, the Bavarians made almost certain of their first silverware of the season after RB Leipzig stumbled to a 0-0 draw against Hoffenheim on Friday.

The announcement by Flick, seen as front-runner to take the Germany job after this year's European Championship, stole the spotlight from Musiala who put Bayern in front after 15 minutes when he weaved past three defenders in the box and fired home.

The 18-year-old Germany midfielder netted another with a looping header in the 37th to make it 3-1 and become the youngest player in Bundesliga history to score six league goals.

Musiala came close to a hat-trick a little later but his effort was cleared off the line.

Eric Maxim Choupo-Moting had doubled Bayern's lead in the 24th, but Wolfsburg's top striker Wout Weghorst cut the deficit to 2-1 in the 35th with his 19th goal of the campaign just before Musiala got his secondgoal.

The Wolves pulled another goal back in the 54th thanks to Maximilian Philipp but missed several chances to level through Weghorst and a Jerome Roussillon shot in the 84th minute that flew just wide of Manuel Neuer's post.

Bayern have 68 points, with RB Leipzig second on 61. Wolfsburg held on to third spot with 54 points despite their defeat after Eintracht Frankfurt's 4-0 loss to Borussia Moenchengladbach left them a point behind the Wolves in fourth.

Last-placed Schalke 04 slumped to a 4-0 defeat at Freiburg that all but sealed their relegation. The Royal Blues are 13 points behind the relegation playoff spot occupied by Hertha Berlin with five games left.