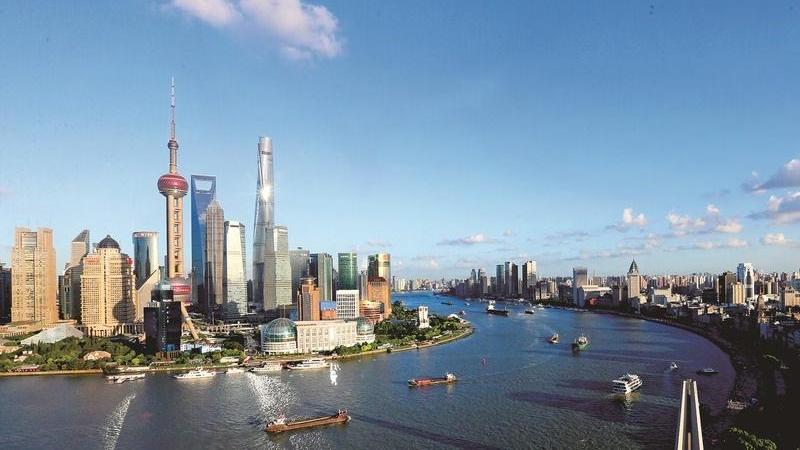 This undated photo shows a view of the Lujiazui area in Shanghai in east China. (PHOTO / XINHUA)

BEIJING - China's economy grew 18.3 percent year-on-year in the first quarter of 2021, as strong domestic and foreign demands power recovery from a low base in early 2020 when COVID-19 stalled the world's second largest economy.

The gross domestic product (GDP) reached 24.93 trillion yuan (about US$3.82 trillion) in Q1, data from the National Bureau of Statistics (NBS) showed Friday.

China's value-added industrial output, an important economic indicator, went up 24.5 percent year-on-year in the first quarter as factory activities continued to pick up, data from the National Bureau of Statistics showed

In the first three months, China saw a steady industrial production rebound, improvement in market sales, recovery in fixed-asset investment, and noticeable momentum in foreign trade of goods, according to the NBS.

The Chinese economy registered a 6.8-percent contraction in the Q1 of 2020 due to the novel coronavirus. Thanks to resolute and effective virus control, the global growth engine regained its footing with a "V-shaped" comeback to attain three consecutive quarters of rebound last year (3.2 percent in Q2, 4.9 percent in Q3 and 6.5 percent in Q4).

Despite the economic rebound, the NBS warned of high uncertainties and instabilities as COVID-19 continued to spread globally and the foundation for the domestic economic recovery is yet to solidify.

On a quarter-on-quarter basis, industrial output went up 2.01 percent. In March alone, it jumped 14.1 percent year-on-year, the NBS said.

Output by major industrial firms increased by 14 percent compared with the first quarter in 2019, resulting in an average year-on-year Q1 growth of 6.8 percent over the past two years.

The industrial output is used to measure the activity of designated large enterprises with an annual business turnover of at least 20 million yuan (about US$3.06 million).

In a breakdown by ownership, output by the private sector went up 16.8 percent year-on-year in March while that by state-controlled enterprises rose 10.9 percent.

Meanwhile, the output of high-tech manufacturing expanded by 14.1 percent last month from a year ago.

China's industrial capacity utilization rate in the Jan-March period went up 9.9 percentage points from a year ago to 77.2 percent, the highest Q1 level since 2013, according to the NBS.

The fixed- asset investment amounted to 9.6 trillion yuan (about US$1.47 trillion) in the first three months, according to the NBS.

The double-digit growth was driven by a low base of comparison early last year when COVID-19 paralyzed economic activities in China. Compared with the 2019 level, fixed-asset investment growth came in at 6 percent.

Investment by the state sector went up 25.3 percent during the January-March period, while private-sector investment rose 26 percent.

On a month-on-month basis, fixed-asset investment rose 1.51 percent in March. 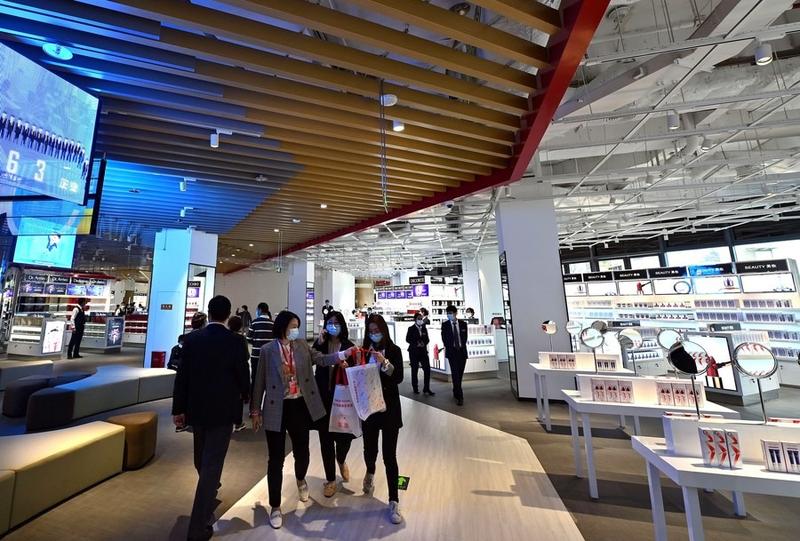 China's retail sales of consumer goods surged 33.9 percent year-on-year in the the first quarter of the year, according to the data.

The growth reversed from declines seen in the first quarter last year, when consumer spending was disrupted by the COVID-19 pandemic.

The average Q1 growth for the past two years stood at 4.2 percent, the NBS said.

"China's consumer market has weathered the test of COVID-19 and revealed its strength in scale, and the consumption upgrade trend remains unchanged," said Liu from the NBS, adding that further improvement in resident incomes will continue to enhance the country's ability to consume.

In March, retail sales surged 34.2 percent year-on-year and was 12.9 percent higher from the 2019 level. The two-year average growth was 6.3 percent.

The catering industry reported a 75.8-percent year-on-year increase in revenue in Q1, as the hardest-hit sector continued to recover from the COVID-19 disruptions.

As people now feel safe dining out, catering revenue in March has seen a two-year average growth of 0.9 percent. It was the first time the monthly figure has shown positive growth from its 2019 level, Liu noted.

China's average per capita disposable income stood at 9,730 yuan (about US$1,490) in Q1, up 13.7 percent in nominal terms from a year earlier and resulting in an average year-on-year Q1 growth of 7 percent over the past two years, the NBS data showed.

The property development climate index compiled by the NBS last month came in at 101.29 points.

New home prices in four first-tier cities - Beijing, Shanghai, Shenzhen and Guangzhou - rose 0.4 percent month on month in March, compared with a 0.5-percent increase registered in February, according to the data.

On a year-on-year basis, home prices registered faster expansion due to low base effects, according to the NBS

Prices of resale homes in second-tier cities saw a 0.4-percent month-on-month increase, while those in third-tier cities climbed 0.3 percent.

On a year-on-year basis, home prices registered faster expansion due to low base effects, according to the NBS.

New home prices in first-tier cities rose 5.2 percent in March, up from 4.8-percent growth in February, while those in second-tier cities went up 4.8 percent, up from a 4.5-percent expansion in the previous month.

The resale home prices in first-tier cities grew 11.4 percent from a year earlier, expanding 0.6 percentage points from the growth in February.

A total of 2.97 million new urban jobs were created in the first quarter, said the NBS.

The surveyed unemployment rate among those aged between 25 and 59, the majority of the labor market, stood at 4.8 percent last month.

Meanwhile, the surveyed unemployment rate in 31 major cities was 5.3 percent in March, 0.2 percentage points lower than that of February, according to the NBS.

The surveyed urban unemployment rate is calculated based on the number of unemployed people who have participated in the employment survey in urban areas.