By An Baijie in Zhuhai, Guangdong 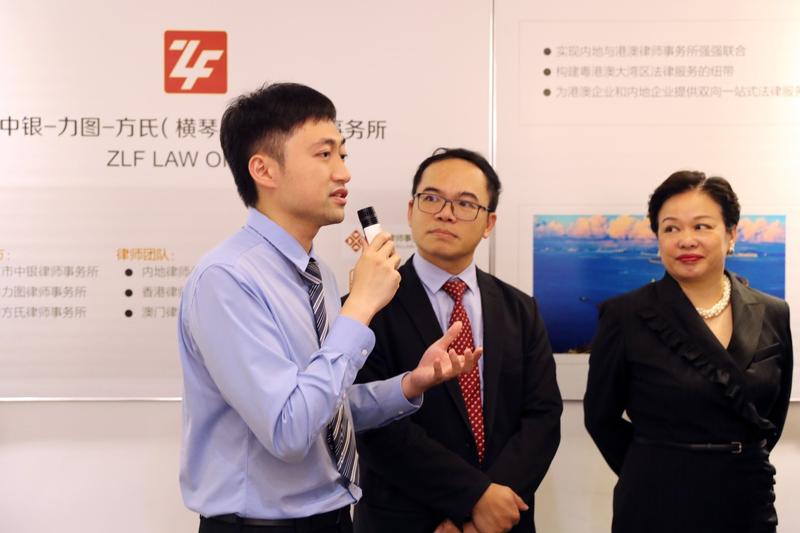 Stephen Zhang talks about his work at a law firm in Zhuhai, Guangdong province, on April 15, 2021. (WANG ZHUANGFEI/CHINADAILY.COM.CN)

As an apprentice lawyer in ZLF Law Office in Zhuhai city of Guangdong province, Zhang said he is quite optimistic about his future amid the nation's ambitious plan to build the city cluster at the Pearl River Delta into the world's leading bay area in innovation, finance and industry.

Yao Yisheng, mayor of Zhuhai, said the government plans to develop the city into "the most attractive place" for talents across the world in the nation's efforts to build up the Greater Bay Area

"The Greater Bay Area boasts more opportunities for young people's development in the future, while the Western countries are not the same as their flourishing past," he said.

The Greater Bay Area consists of Hong Kong, Macao and nine cities in Guangdong, including Shenzhen and Guangzhou, with a total population of 70 million. China unveiled its plan of building up the GBA in February 2019.

With a string of follow-up measures put in place since then, the Greater Bay Area witnessed steady development. Cities in the area have built increasingly closer ties with each other and achieved much easier flow of talent, goods and capital.

New vitality has been injected into the bay area with a total area of 56,000 square kilometers and an economy of 12 trillion yuan (US$1.84 trillion).

Chen Yi, director and senior partner of the ZLF Law Office, said the huge market of the mainland has attracted talent from Hong Kong and Macao to start their business in the Greater Bay Area.

"There are lots of State-owned enterprises and private companies in the GBA, providing numerous opportunities for law services," she said.

The ZLF Law Office, jointly built by three law firms from Beijing, Hong Kong and Macao in July 2016, has registered 40 to 50 percent sales growth in the past four years, she added.

Wu Chou-kit, president of the Macao Institute of Engineers, said the Greater Bay Area has provided lots of opportunities for construction companies in Hong Kong and Macao to develop their businesses in mainland areas.

Yao Yisheng, mayor of Zhuhai, said on Thursday the government plans to develop the city into "the most attractive place" for talents across the world in the nation's efforts to build up the Greater Bay Area.

Young people with technological knowledge are welcomed to build up their business at the Innovalley HQ, also known as the Hengqin-Macao Youth Innovation Valley based in Zhuhai, he said.

"There is great potential in the Greater Bay Area, with numerous opportunities for a bright future," Yao said.