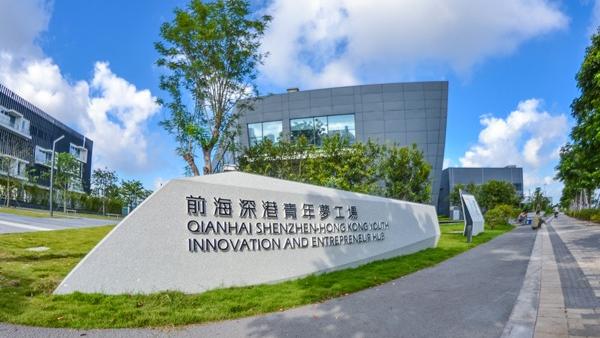 In order to nurture Hong Kong youth's sense of belonging to the motherland, the special administrative region is joining hands with Guangdong province to officially kick off three programs as part of the plan to essentially help talented Hong Kong youth take part in the big story unfolding across the Guangdong-Hong Kong-Macao Greater Bay Area.

"The Bay Area is a natural place for our young people to venture into and take advantage of the golden opportunities, right under their noses, brought about by China's innovation and entrepreneurship," Hong Kong Chief Executive Carrie Lam Cheng Yuet-ngor said at a ceremony in Hong Kong on Friday.

The scheme provides 2,000 positions, around 700 of which are designated for innovation and technology posts

The ceremony－"Greater Bay Area: Starting Line to a Bright Future" with a theme of youth development－took place as a tribute to the second anniversary of the promulgation of the Outline Development Plan for the Guangdong-Hong Kong-Macao Greater Bay Area.

The event witnessed the official launch of three programs spearheaded by the Guangdong and Hong Kong governments and tailor made for young Hong Kong talent, who are known for their multilingual abilities, as they aspire to go beyond the city to seek out greener pastures and realize their aspirations on a larger stage.

One bright spot is the Greater Bay Area Youth Employment Scheme, announced by Lam in her policy address in November. The scheme provides 2,000 positions, around 700 of which are designated for innovation and technology posts. The Hong Kong SAR government will grant a monthly allowance of HK$10,000 (US$1289.4) to enterprises for each graduate employed for up to 18 months.

The scheme comes at a critical time as Lam warned in the policy blueprint that "the city's youth unemployment rate may remain at double digits for some time taking into account Hong Kong's economy and market scale".

Since applications for the scheme opened on Jan 8, Lam said as many as 200 companies have expressed keen interest and considered recruiting local talent. Global accounting firm PricewaterhouseCoopers, for instance, plans to offer 100 job positions.

In October, during the 40th anniversary of the establishment of the Shenzhen Special Economic Zone, President Xi Jinping encouraged young people in Hong Kong and Macao to study and work on the mainland to strengthen their "sense of belonging".

"As youth development across the Bay Area has been put at the top of the national agenda, Guangdong has been at the forefront of offering a much larger playing field for Hong Kong and Macao young talent," Zhang Xin, vice-governor of Guangdong province, said in a recorded video.

Zhang said the first batch of 10 youth entrepreneurial bases across the Bay Area, to which the Guangdong and Hong Kong governments jointly presented a plaque in May 2019, are well underway.

Meanwhile, the region is attracting Hong Kong entrepreneurs by offering generous subsidies for business startup costs. A batch of Guangdong-based positions in local governments and public institutions are also open to or even designated for Hong Kong youth.

Today, Guangdong houses nearly 600 Hong Kong/Macao-based startup teams employing more than 4,000 talented youth. Zhang pledged concerted efforts and closer cooperation with his Hong Kong counterparts to press ahead with the Greater Bay Area Youth Employment Scheme to help Hong Kong youth get their careers off the ground across the region.

For the Funding Scheme for Youth Entrepreneurship in the Bay Area, Lam vowed to provide HK$100 million for more than 10 nongovernmental organizations to implement youth entrepreneurship projects, and for approximately 200 youth startups. Nearly 4,000 young people will be given better entrepreneurial support and incubation services.

Meanwhile, the Funding Scheme for Experiential Programmes at Innovation and Entrepreneurial Bases in the Bay Area will provide subsidies for NGOs. Every NGO can have no more than two projects funded, with the funding of each project limited to HK$700,000, Lam added.