By ​Zhang Yangfei in Beijing and Hu Meidong in Xiamen 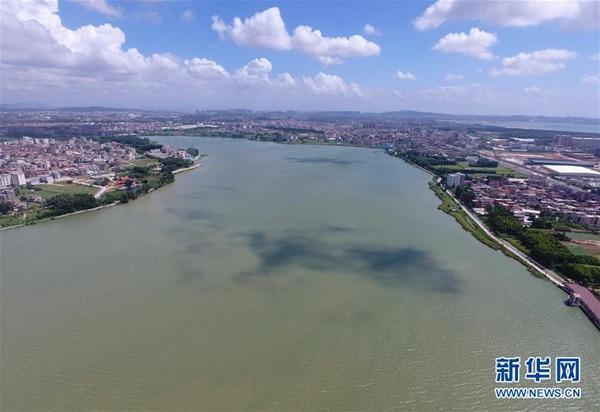 This undated aerial photo shows a view of Longhu Lake in Fujian province, the source for the water being sent from Fujian to Jinmen in Taiwan. (LIN SHANCHUAN / XINHUA)

Fujian province has increased the water supply to Jinmen in Taiwan, greatly alleviating the area's water shortage as the island faces its most serious drought in decades.

Since December, Fujian has increased the daily water supply by pipeline from 14,000 metric tons to 17,100 metric tons from Quanzhou to Jinmen, and in the first quarter of this year, Fujian shipped 1.54 million metric tons of water to Jinmen, according to the Fujian Jinjin Water Supply Co.

Taiwan media also reported that the water supplied by the Chinese mainland met more than 68 percent of Jinmen's life and industrial water demand in March.

The water supply that started two years ago has changed and solved the basic needs of people, allowing them to live their lives normally. How can we not feel grateful?

Jinmen, which is in the southern waters of Fujian, has historically had scarce water resources. Meteorological records show that the average rainfall in Jinmen is around 1,000 millimeters per year.

Jinmen had tried transporting water from Taiwan's main island, as well as desalination projects, but the high costs and poor results didn't help solve the problem until August 2018, when the water supply from Fujian officially started.

Last year, precipitation in Jinmen dropped to 450 millimeters, said Yang Zi-mei, vice-president of the Taiwan Federation of Jinmen Associations, adding that many ponds and lakes have dried up, farmers couldn't find water to irrigate sorghum, and tourism has been significantly affected as well.

"We felt fortunate that we could have water from Fujian; otherwise we wouldn't even be able to have enough water for our daily life," she said.

Yang Wei-ju, the federation's president, said the water supply from Fujian was timely and lifesaving".

"The water supply that started two years ago has changed and solved the basic needs of people, allowing them to live their lives normally. How can we not feel grateful?" he said.

"Just as the human body needs blood to function, the land needs water in order for all things to grow. Those who are willing to give their blood to save others' lives must be the closest people," he added.

Taiwan has undergone its most severe drought in 56 years and, in response, the local government has imposed restrictions on water use for residents and factories.

The island's economic head, Wang Mei-hua, said last month at a news briefing, while announcing the water rationing plan, that local authorities were expecting the "plum rains" season to come, but that in reality this was not something they could control.

Chen Lili, a professor at Minnan Normal University in Fujian, said Taiwan's water shortage this year was not occasional, but rather the problem has existed for a long time. The DPP authorities have failed to pay enough attention to water consumption, which concerns people's livelihood, infrastructure and the economy, but have focused instead on elections.

She said it is not only water that Taiwan falls short of, but also electricity, talent, money and land. Influenced by local politics, Taiwan's infrastructure and public facilities have shown severe deficiencies in terms of renovation and maintenance.

In response to the criticism from experts, Ma Xiaoguang, a spokesman for the Taiwan Affairs Office of the State Council, said at a news conference on Wednesday that such comments were correct.

"Our compatriots in Taiwan will gradually tell what is right or wrong," he said.