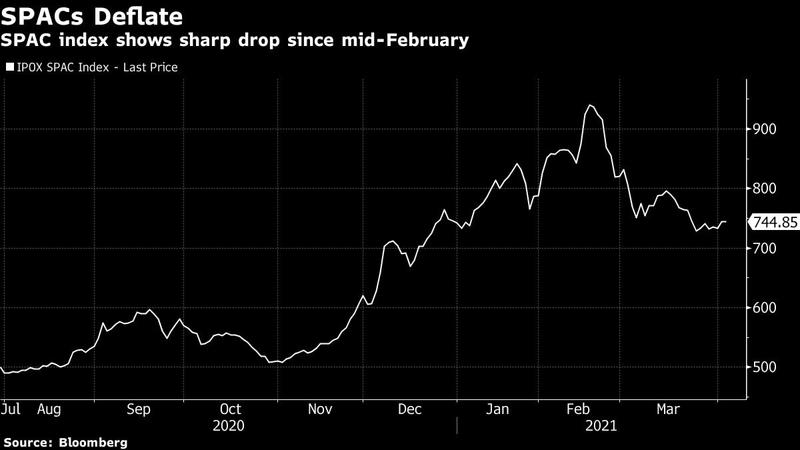 Hong Kong and Singapore are trying to get in on the boom in blank check company listings, while safeguarding investors from what some say is a bubble about to burst.

Authorities in the Asian financial hubs are mulling tighter frameworks than in the US for listings of special purpose acquisition companies (SPACs). The US-led dealmaking boom has raised about US$100 billion so far this year even though it’s now showing signs of fizzling amid increased scrutiny by regulators.

“They are a bit too late to the party so it’s good that they are cautious,” said Justin Tang, head of Asian research at United First Partners in Singapore. “The euphoria in this space means that caution is highly warranted.”

Authorities in the Asian financial hubs are mulling tighter frameworks than in the US for listings of special purpose acquisition companies (SPACs). But investors and dealmakers in both cities are questioning whether the tighter scrutiny will hamper their ability to attract SPACs

Pushed by the government, Hong Kong is said to target having its regime in place by the end of the year. The plan, which is still being formulated, would set special conditions for sponsors of SPACs, including having a track record of managing money, and that SPAC acquisitions will have to meet the existing standards for initial public offerings.

It’s in a race with Singapore, which is now further along after last week releasing a consultation paper on its plan. Singapore Exchange Ltd.’s regulatory arm is proposing a minimum S$300 million (US$225 million) market capitalization. The US has no such floor. It’s also proposing stricter criteria for warrants and share redemptions.

Investors and dealmakers in both cities are now questioning whether the tighter scrutiny will hamper their ability to attract SPACs.

Marcia Ellis, a partner in Hong Kong at Morrison & Foerster LLP, said too many “safeguards” in the framework “could kill flexibility, which may render it unattractive to SPAC sponsors.”

“The market expects and has priced in US-style SPAC terms,” she said. “We need to be a ‘price taker’ on this or risk missing the boat entirely.”

Depending on market feedback on the consultation, which is open until April 28, Singapore aims to have its framework in place by mid-year, Tan Boon Gin, chief executive officer of SGX RegCo, said at a briefing last week. Hong Kong, meanwhile, is looking to have a consultation paper ready for feedback by June at the earliest, people familiar have said.

SPACS raise money from investors with a plan to acquire another company within two years. But a big concern now is that with boom in such deals, there will be few viable companies available for them to acquire down the line.

An index that tracks SPACs has slid 21 percent since mid-February.

Ronald Chan, founder and chief investment officer of the Hong Kong-based Chartwell Capital Ltd., said the city should avoid taking a leading role in SPACs, calling it a “massive bubble”.

In Hong Kong, there’s also added concern of a set back in the financial hub’s efforts to tame the wilder side of its market after years of combating shell companies that were seen as a hotbed for stock manipulation.

“The last thing we wish to see is to overthrow or disrupt the long, hard-earned effort against shell and reverse takeovers,” Chan said.

SPAC listings are spared from the level of scrutiny imposed in Hong Kong on a regular IPO, including stringent disclosures and due diligence by sponsors that could hold the banks themselves responsible.

That’s a concern for investors, said Christine Chow, a board director at London-based International Corporate Governance Network, whose members represent more than US$54 trillion in assets under management. “Without that transparency, investors might be buying into the brand name of a private equity firm or a star CEO or founder,” Chow said.

Hong Kong is now losing out on deal from some of its biggest names such as Adrian Cheng, who are preparing to or have raised such funds in the US Horizon Ventures, a firm backed by billionaire Li Ka-shing, this year took its three financial technology holdings - Hippo Enterprises Inc., Doma and Bakkt - public in SPACs deals valued at US$10 billion in total.

Listing through a SPAC can be completed in a matter of weeks compared with the 12 months it would take to go public in the regular way.

But Hong Kong’s legal framework also offers other hurdles. In the US investors are able to seek class action suits against wrongful statements, enabling market regulators there to have a lighter touch.

He proposed the city should look at setting up a “SPAC Connect” system where investors could access and trade SPACs listed elsewhere, offloading the regulatory burden of accounting fraud and insider trading to the foreign venues.