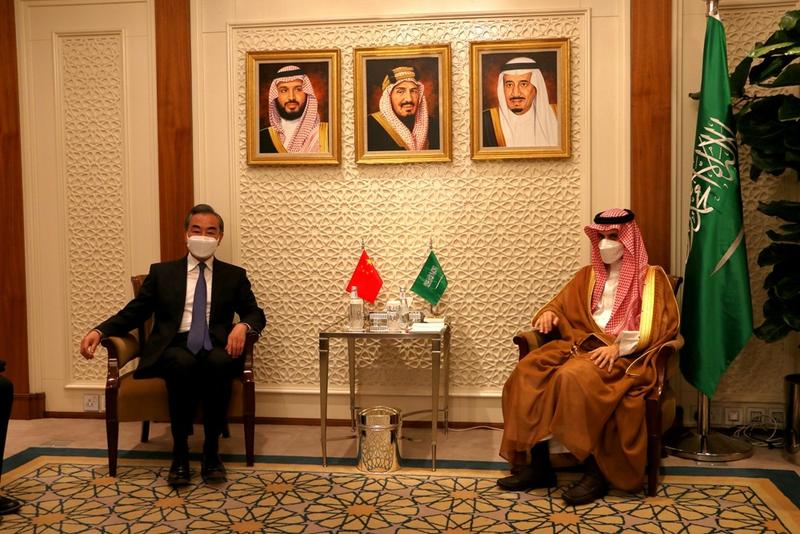 RIYADH - China and the Gulf Cooperation Council (GCC) on Wednesday discussed resuming their free trade talks and seeking to clinch a deal as soon as possible to deepen bilateral cooperation.

The GCC chief confirmed that China tops the GCC's list of resuming free trade negotiations, adding that he hopes that the GCC-China talks will end with an agreement as soon as possible

During a meeting between Chinese State Councilor and Foreign Minister Wang Yi and GCC Secretary General Nayef bin Falah Al-Hajraf, the two sides highlighted the importance of resuming the talks which have lasted for years.

Wang lauded the GCC, which celebrates the 40th anniversary of its founding and the establishment of its ties with China, for playing a great role in advancing the social and economic development of its members in the past decades.

He noted that the ties between China and the GCC, which have witnessed remarkable achievement in the past 40 years, are now standing on a new historical starting point.

Wang stressed China's keenness to elevate the level of the bilateral ties and deepen mutual support and cooperation in all aspects, on the basis of mutual respect and support.

The Chinese diplomat expressed his hope for an earlier conclusion of the free trade talks between China and the GCC, which he said will help GCC member states to offset the pressure of economic downturn and realize quick recovery.

Wang also said that China is willing to boost cooperation with the GCC in fighting the COVID-19 pandemic, and build a community of health for all.

For his part, al-Hajraf said that the relations between the GCC and China are based on mutual trust and respect, and the GCC and all its members value the strategic cooperation with China.

The GCC chief confirmed that China tops the GCC's list of resuming free trade negotiations, adding that he hopes that the GCC-China talks will end with an agreement as soon as possible, so to enhance the mutually beneficial and win-win cooperation in the digital economy and high tech areas.

Al-Hajraf said the GCC, which supports China's efforts in fighting the coronavirus pandemic, hopes to learn from China's advanced experiences in controlling the COVID-19 spread.

The GCC welcomes and highly commends China's important role in preserving the stability of the Middle East, and is willing to further enhance its cooperation with China in this regard, the GCC chief added.