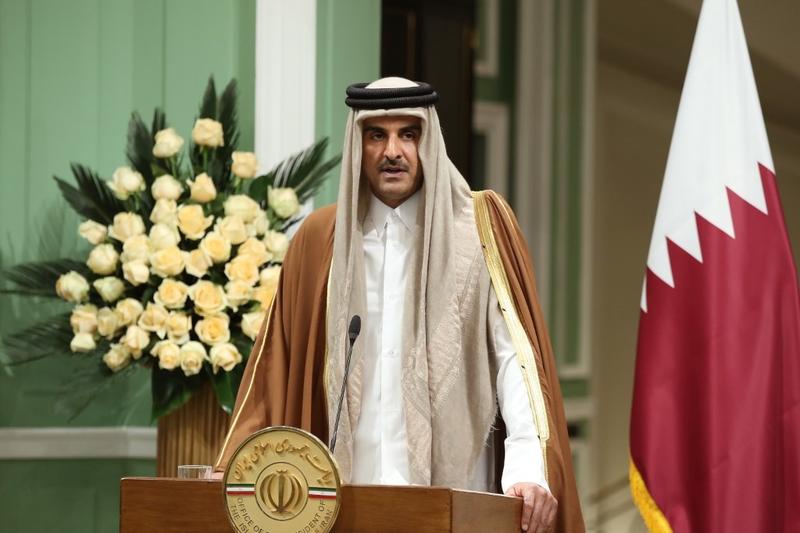 A handout picture provided by the official website of the Iranian Presidency on Jan 12, 2020 shows Emir of Qatar Tamim bin Hamad al-Thani speaking during a joint press conference with the Iranian president in Tehran. (PHOTO / AFP)

Saudi Arabia, the United Arab Emirates, Bahrain, and Egypt have imposed a diplomatic and economic blockade on Qatar since June 2017

In a phone call with the Kuwaiti Emir Sheikh Nawaf Al-Ahmad Al-Jaber Al-Sabah, the Qatari emir thanked his Kuwaiti counterpart for his country's continuous efforts to facilitate unity among GCC countries, KUNA said.

The intension between Qatar and other GCC countries has signs of de-escalations in recent weeks.

"Within the framework of reconciliation efforts, fruitful discussions took place recently, in which all parties affirmed their keenness on Gulf and Arab solidarity and stability and to reach a final agreement that would achieve the aspirations of lasting solidarity between their countries and achieve what is good for their people," he said.

Saudi Arabia, the United Arab Emirates, Bahrain, and Egypt have imposed a diplomatic and economic blockade on Qatar since June 2017, alleging that the gas-rich Gulf country supports terrorism and interferes in their domestic affairs. They have been asking for a list of demands which Qatar has to implement in order to revive ties.

Qatar has repeatedly denied the charges, calling it "unjustified" and "baseless," and refused the demands, citing them as interference in its sovereignty.