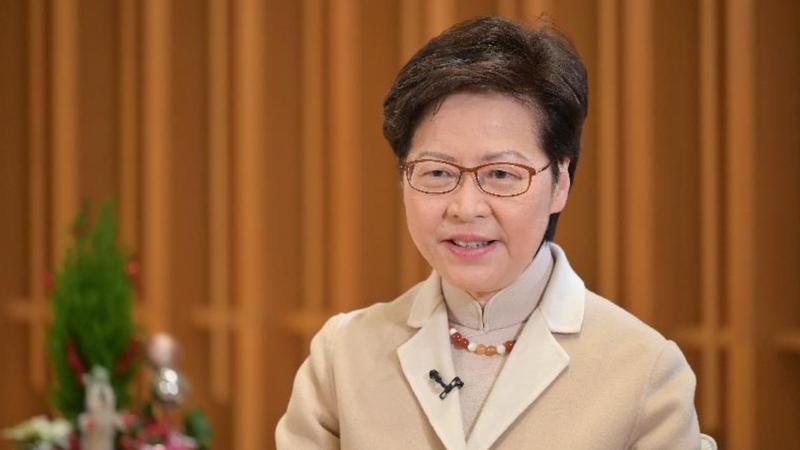 Hong Kong Chief Executive Carrie Lam Cheng Yuet-ngor said it is inspiring to see the five-year draft outline has emphasized Hong Kong and she is assured that it will bring unlimited opportunities to the city.

In a post on her social media page on Friday, Lam vowed to make full use of the nation's support to inject new impetus into Hong Kong's economy through measures put forward in her policy address.

Compared with the 13th Five-Year Plan, it is inspiring to see that the new draft five-year outline has made an additional mention of supporting Hong Kong to become an international hub of innovation and technology, aviation and Chinese-foreign exchange in art and culture, Lam said.

In a post on her social media page on Friday, Carrie Lam vowed to make full use of the nation's support to inject new impetus into Hong Kong's economy through measures put forward in her policy address

Lam said she was told by mainland officials that for a five-year plan to include the vision of a central authority, province or a city, every character is worth a thousand pieces of gold.

"The draft outline of the 14th Five-Year Plan has over 500 words on Hong Kong, which are bound to bring unlimited opportunity for us," she believes.

Expressing her gratitude to the central government to accept most of the SAR government's opinions, Lam said the SAR government has attached high importance on integrating into the national development and has done research and provided suggestions for the outline for over a year.

Lam said she noticed that media in Hong Kong has provided fewer coverage of the part on Hong Kong in the draft outline, which mentioned that the central government will stick to the "one country, two systems" principle, plus a whole chapter of 61, titled "maintaining the long-term prosperity and stability of Hong Kong and Macao".

The draft outline of the 14th Five-Year Plan (2021-2025) for national economic and social development and the long-range objectives through the year 2035 was submitted for the national legislature for deliberation on Friday.

In the designated chapter for the Hong Kong and Macao special administrative regions, the central government pledges to better the mechanism for the regions to integrate into the nation's development plan. It also said it will support Hong Kong to buttress its role as the international financial, shipping, trade and aviation hubs, as well as off-shore renminbi trade hub and international capital and risk management centers.

It will strive to improve policies for residents of the special administrative regions to live and work on the Chinese mainland, as well as support exchanges and cooperation among the SARs and other parts of the nation, the draft said.

Lam also revealed that the SAR government will give a detailed account of its relevant work after the National People's Congress passed the draft outline.

The government will continue to listen to opinions with an open mind, she said.