Largest market for EVs is on a roll 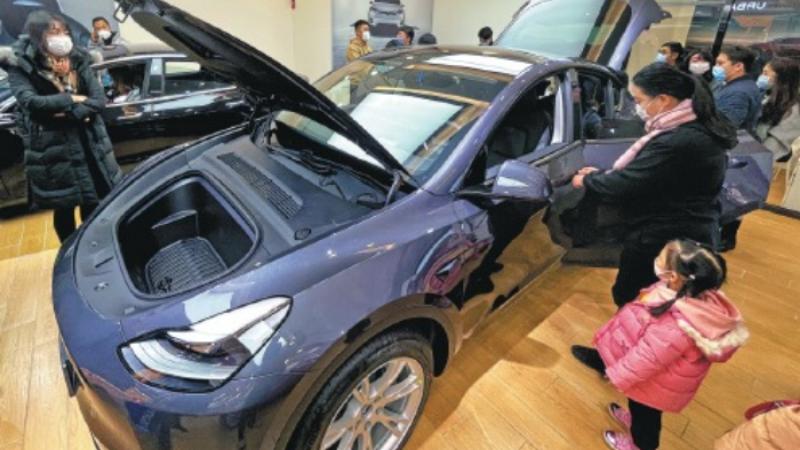 Potential buyers check out the Tesla Model Y, a fully electric sport utility vehicle made in China, at a shopping mall in Beijing on Jan 9. (PHOTO / CHINA DAILY)

Volkswagen AG, the world's second-largest carmaker by sales, is planning to ship an electric sport utility vehicle (SUV) model, called the ID.4, to its Chinese dealers after Spring Festival.

That would mark VW's first major salvo in the race for lead in the new energy vehicle (NEV) sector in China, the global automobile industry's biggest market.

The bright prospects for the booming automobile sector are attracting technology companies to jump on the EV bandwagon as well. Baidu and Alibaba, investors in Chinese EV startups such as Xpeng and WM Motor, are now trying their hand at car-making, believing their expertise in AI and big data can improve onboard infotainment functions

The model, with different variants, is developed on a dedicated electric vehicle (EV) platform that the carmaker is counting on to shake off the emissions-cheating scandal and complete the transition from internal combustion engine vehicles to electric ones.

In China, the carmaker has built two new plants for the platform with local partners, with construction on one of them taking two years and costing 17 billion yuan (US$2.6 billion).Another plant is scheduled to join in 2023.

These are part of its efforts to sell 1.5 million NEVs a year in China by 2025. By the same year, over one-third of its vehicles available in the Chinese market will be NEVs.

Stephan Woellenstein, CEO of Volkswagen Group China, the local subsidiary, said the company is eyeing a share in the country's NEV segment, similar to the size it has secured in the gasoline market. Last year, its sales accounted for 19.3 percent of China's total passenger vehicle sales.

The NEV goal will continue to make China the company's largest source of revenue and profit and help reach the group's goal to become carbon-neutral by 2050.

Many carmakers are fined or buy carbon credits each year, especially in Europe, if/when they fail to reach emission standards.

Last month, Volkswagen said it missed EU targets on emissions from its passenger car fleet last year and would face a fine of more than 100 million euros (US$120 million).

Similar reasons, together with the conviction in the potential of EVs that made possible such things as autonomous driving, have seen established carmakers speeding up their forays into the segment.

China, as the world's largest vehicle market, is the most important target market for them, ranging from BMW to General Motors. Because of its size and people's higher level of acceptance, China is any automaker's dream market.

China started to develop the NEV sector since 2009, with the help of government subsidies, in order to reduce dependence on gasoline and to alleviate air pollution. Transport accounts for roughly 14 percent of carbon emissions, according to data from the European Environment Agency.

In 2015, China overtook the United States to become the world's largest market for such vehicles and has held the title for six years in a row. Last year, total deliveries of electric cars and plug-in hybrids hit nearly 1.37 million, up 10.9 percent from 2019, despite the COVID-19 pandemic, according to the China Association of Automobile Manufacturers.

They accounted for 5.4 percent of total vehicle sales in the country. Analysts said a sector is expected to grow independently when its market share reaches 5 percent.

The association estimated their sales figure to reach 1.8 million this year. The State Council, the country's Cabinet, expects NEVs to account for one-fifth of total car sales in 2025.

Over the past few years of fast development, the segment has grown already to a state of fierce competition and glowing vitality, fueled by the financial stimuli, new products and favorable license plate policies in big cities.

Yet, before the arrival of products from established international carmakers like VW, popular models were usually low-end ones and premium ones.

China, as the world's largest vehicle market, is the most important target market for automakers, ranging from BMW to General Motors. Because of its size and people's higher level of acceptance, China is any automaker's dream market

One example is a two-seater with a price tag starting from 28,800 yuan and a driving range of 120-170 kilometers. The model, from Wuling, a Chinese brand, is the second one after Tesla's Model 3 to reach monthly sales of over 30,000 units in the country.

Shao Jie, an executive at Wuling, said the vehicle' prices and ease of use have made it popular.

"For example, some people are not experienced drivers, and big cars are sort of intimidating. But this one is easy to drive an park. And it can be charged easily, even at home," he said.

Tesla is the representative at the other end of the spectrum. Its Model 3 was the best-seller in the country last year, with around 140,000 units sold, accounting for 28 percent of the carmaker's global deliveries.

On the first day of 2021, it announced the prices of its Model Y SUV made at its Shanghai plant, starting from 339,900 yuan. The orders soon poured in, even crashing its website temporarily.

"If you place an order now (in January), it would be delivered in the second quarter," said Wang Muchen, a Tesla China representative.

Chinese EV startups such as Nio and Li Auto, both listed in the United States, are selling vehicles at even higher prices.

Volkswagen and other volume brands are targeting a lower price point. "We are Volkswagen, which means cars for the masses, not for the millionaires," said Woellenstein.

The ID.4 model, which started presales in late January, is priced starting from 199,900 yuan. Buick's Velite 7, an electric SUV produced by General Motors, is selling at below 200,000 yuan as well.

Chinese carmakers, which are the first movers in terms of transition to making electric vehicles compared with international ones, are seizing the opportunity to improve their branding and products.

BJEV, the new energy arm of State-owned BAIC Group, has established a brand called Arcfox, whose model sells at a starting price of 241,900 yuan, basically the level of Tesla's Model 3.

GAC Motor's Aion sees Tesla as its rival as well. Aion President Gu Huinan said it will launch a model that will have a driving range of 1,000 km on one charge this year.

Geely, which owns Volvo, unveiled its dedicated EV platform late last year. The carmaker said it is developing 16 vehicles on the platform and some of them will roll off the assembly line this year.

The vast potential has piqued the interest of investors. Companies in the NEV industry raised a combined 129.21 billion yuan last year, according to Qcc, an enterprise credit rating system. That was the first time that the sector's annual financing exceeded 100 billion yuan and marked a surge of 159.4 percent over the 2019 level.

The bright prospects for the booming sector are attracting technology companies to jump on the EV bandwagon as well. Baidu and Alibaba, investors in Chinese EV startups such as Xpeng and WM Motor, are now trying their hand at car-making, believing their expertise in AI and big data can improve onboard infotainment functions.

In December, Baidu announced it will build a stand-alone car company to produce and market passenger vehicles that will feature its Apollo autonomous system as well as other core technologies.

With a tap on the smartphone, the sedan can drive itself into the parking lot and stop the engine, and another tap can beckon it to come and pick the driver up at designated places, said the joint venture.