US govt urged to focus on cooperation

By Zhang Yunbi in Beijing and Zhao Huanxin in Washington 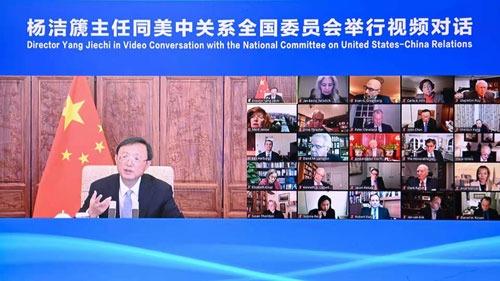 Yang Jiechi (right), a member of the Political Bureau of the Communist Party of China Central Committee and director of the Office of the Foreign Affairs Commission of the CPC Central Committee, delivers a speech in an online dialogue with the National Committee on United States-China Relations, Feb 2, 2021. (PHOTO / FMPRC.GOV.CN)

It is a task for both China and the United States to take their relationship back to "a predictable and constructive track", a senior Chinese diplomat said on Tuesday while outlining detailed possibilities for the two countries to work together.

The world's two largest economies should build a model of interaction that "focuses on peaceful coexistence and win-win cooperation", said Yang Jiechi, a member of the Political Bureau of the Communist Party of China Central Committee and director of the Office of the Foreign Affairs Commission of the CPC Central Committee.

The veteran diplomat, who once served as China's ambassador to the US, made the remark in an online dialogue with the National Committee on United States-China Relations, a decades-old organization that promotes friendly bilateral exchanges.

Senior Chinese diplomat Yang Jiechi made a four-point proposal in his speech: China should be seen as it is; normal interactions need to be restored; proper management of differences is called for; and mutually beneficial cooperation ought to be broadened

Yang called on the two countries to repair their ties and honor common global duties now that Joe Biden has taken office as US president. Yang also emphasized China's unchanged commitment to opening up to the world, including the US, observers said.

Yang made a four-point proposal in his speech: China should be seen as it is; normal interactions need to be restored; proper management of differences is called for; and mutually beneficial cooperation ought to be broadened.

The US should strictly abide by the one-China principle and stop interfering in the affairs of the Hong Kong Special Administrative Region and the Tibet and Xinjiang Uygur autonomous regions, as they "constitute a red line that must not be crossed", Yang said.

"Any trespassing would end up undermining China-US relations and the United States' own interests," he said.

He also urged the new administration to "remove the stumbling blocks to people-to-people exchanges, like harassing Chinese students, restricting Chinese media outlets, shutting down Confucius Institutes and suppressing Chinese companies", adding that the measures are "wrong" and "unpopular".

Trade issues should not be politicized, and the concept of "national security" should not be abused, Yang said, adding that "it falls on both sides to provide a fair, open and nondiscriminatory environment for each other's companies".

Beijing is ready for closer macroeconomic policy coordination and more cooperation with Washington to keep the global industrial and supply chains safe and maintain global economic and financial stability, he said.

"We hope the new administration will respond to the will of both peoples and follow the trend of history," Yang said.

READ MORE: Things to do and not to do to stabilize Sino-US ties

The two nations' bilateral trade volume now takes up a fifth of the world's total, and two-way investment has skyrocketed to almost US$240 billion.

The combined economies of China and the US now account for a third of the world's total.

Yang named areas crucial in the bilateral and global contexts, such as the response to COVID-19, economic recovery and climate change, as ideal for cooperation.

Yuan Zheng, deputy director of the Chinese Academy of Social Sciences' Institute of American Studies, said Yang's proposal is among Beijing's constructive ideas for China-US ties. The proposal charts a possible course for the future trajectory of their relations, Yuan said, and "now it is time for Washington to respond in a positive way".

"The speech highlights the need to take measures to overturn the adverse situation between the two nations. … and his warning regarding the Taiwan question actually asks Washington not to go too far in this regard to trigger a major conflict," Yuan said.

Yang's proposal on bilateral cooperation shows that reinforced communication helps mitigate miscalculation and yields benefits to both sides and the world, Yuan said.

Jacob Lew, the National Committee on United States-China Relations' new board chairman, said, "For the relationship between our great nations to reach a level of engagement and understanding that would benefit each of us and the global community, it's essential that communication leads to tangible steps."

"From my own years of experience, I also know that if leaders approach even very challenging issues and build personal relationships that permit candid exchanges, progress can be made, and conflicts can be managed if agreements are followed by actions," Lew said at the Tuesday event.