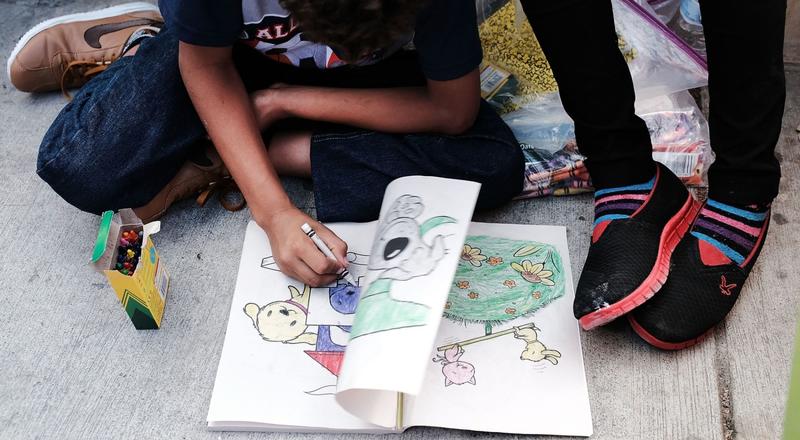 A Honduran child draws in a coloring book while waiting with his family along the border bridge after being denied entry into the Texas city of Brownsville which has become dependent on the daily crossing into and out of Mexico on June 25, 2018 in Brownsville, Texas. (PHOTO / BLOOMBERG)

US President Joe Biden will sign a trio of executive orders on Tuesday to reverse Donald Trump’s crackdown on asylum seekers and refugees, continuing his push to loosen his predecessor’s strict immigration policies.

Biden will direct the Department of Homeland Security to conduct a broad review of asylum programs that were targeted by the Trump administration, asking his administration to rescind proclamations, rules, and guidance documents intended to curb the entry of migrants seeking humanitarian protection in the US.

White House officials said Biden’s orders were designed to reverse policies they described as cruel and wasteful, while promoting inclusion and the integration of immigrants

In a second executive order, Biden is ordering all federal agencies to conduct a review of policies and regulations that created barriers to legal immigration to the US. The order also re-establishes a White House task force dedicated to ensuring the legal immigration system works fairly and efficiently.

The president’s third order will create a new task force charged with trying to reunite children who were forcibly separated from their guardians at the Mexico border under the Trump administration’s zero-tolerance immigration enforcement policies. First lady Jill Biden is expected to serve on the task force.

White House officials said Biden’s orders were designed to reverse policies they described as cruel and wasteful, while promoting inclusion and the integration of immigrants. The officials described the planned executive orders before their signing on the condition of anonymity.

As part of the push, Biden is ordering Homeland Security to review the Trump administration’s Migrant Protection Protocols, which forced asylum seekers at the southern border to wait in Mexico while US courts processed their claims, which could take months or years.

Immigrant-rights advocates said the measures put Central Americans fleeing persecution in peril by requiring them to stay in places where they could still face danger. Another set of Trump-era agreements that allowed the US to send back asylum seekers who did not first seek relief in Honduras, El Salvador and Guatemala will also be placed under review, officials said.

Trump administration officials defended the policies, which were enacted in 2019, as a means to stop a surge of migration from Central America. At the time, officials accused migrants seeking economic opportunity of taking advantage of so-called loopholes in the asylum system to gain entry into the U.S. Under the previous system, asylum applicants usually would be allowed into the country while their cases were processed in the courts.

Biden will also begin the process rescinding the Trump administration’s public charge rule, which makes it easier to refuse entry to potential immigrants on the grounds they could become dependent on government assistance.

The child separation task force -- which will be chaired by the Homeland Security secretary and include leaders of the State Department and Department of Health and Human Services -- will seek not only to identify children who were separated from their families, but suggest ways the government could reunify families. The parents of more than 600 children still have not been located, according to government data.

The executive actions, which have been delayed as the White House waited for the Senate to confirm Alejandro Mayorkas as secretary of Homeland Security, fall short of the ambitions of some immigration reform activists

Trump ended the separation policy in 2018 in response to widespread public outrage. The Justice Department announced this week it had rescinded a Trump-era memo mandating the prosecution of any adult caught illegally crossing the US border.

The executive actions, which have been delayed as the White House waited for the Senate to confirm Alejandro Mayorkas as secretary of Homeland Security, fall short of the ambitions of some immigration reform activists.

Biden won’t unveil a directive to open new refugee processing centers or increase the annual U.S. refugee cap, as he promised during the presidential campaign. And he won’t order the immediate release of children and their parents from Immigration and Customs Enforcement detention.

Biden’s executive orders also avoid addressing a Trump administration initiative that cites concerns over the coronavirus pandemic to quickly return migrants crossing the US-Mexico border -- even if they might be ordinarily entitled to a longer legal process.

Administration officials said Biden would continue to address immigration issues through executive action, and said the president has been aggressive in rolling back other Trump administration initiatives in the early days of his presidency.

Previous directives have ended Trump’s travel ban on some predominately Muslim nations, halted construction of his predecessor’s border wall and stopped deportations of certain immigrants for 100 days -- though the latter policy was put off by a federal judge.

Biden has also proposed a sweeping immigration bill that would offer an eight-year path to citizenship for many of the estimated 11 million immigrants living illegally in the US.

The plan does not include an offer to enhance security measures at the US-Mexico border in exchange, to appeal to Republicans, meaning it’s unlikely it will pass Congress as written.