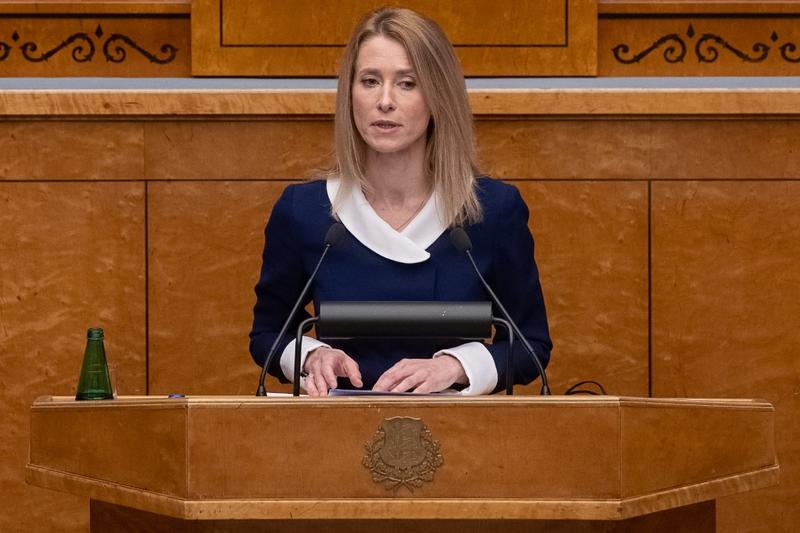 The leader of the Reform Party, the future Prime Minister Kaja Kallas addresses the Estonian Parliament, in Tallinn, Estonia, on Jan 25, 2021. (PHOTO / AFP)

TALLINN - Estonian Reform Party Chairwoman Kaja Kallas, 43, was confirmed by the Riigikogu (parliament) on Monday as the country's new prime minister and was also authorized to form a coalition with the Center Party. The vote was 70 in favor in the 101-seat parliament.

Addressing the deputies before the vote, Kallas said that the new government will strive to ensure better life for Estonians, and to steer the country in a bold, open and wise manner.

She emphasized the new government's determination to address the coronavirus pandemic and the associated health crisis, to make the industry greener, and to invest in the country's digital transformation.

Addressing the deputies before the vote, Kaja Kallas said that the new government will strive to ensure better life for Estonians, and to steer the country in a bold, open and wise manner

ALSO READ: Estonian opposition asked to step in after PM quits over scandal

Estonian President Kersti Kaljulaid was scheduled to appoint Kallas' government at her office on Tuesday. The Reform-Center coalition government, which includes seven ministers from each party in addition to the prime minister, will take the oath of office in the parliament later on Tuesday.

Ratas will not hold a post in the new government.

On Jan 14, President Kaljulaid formally nominated Kallas as the candidate for prime minister, one day after Ratas had submitted his resignation over allegations of his party's involvement in "possible corruption" in relation to a property development project in the capital Tallinn.

Ratas's resignation led to the end of the coalition of the Center Party, the Conservative People's Party, and the national-conservative Isamaa party.