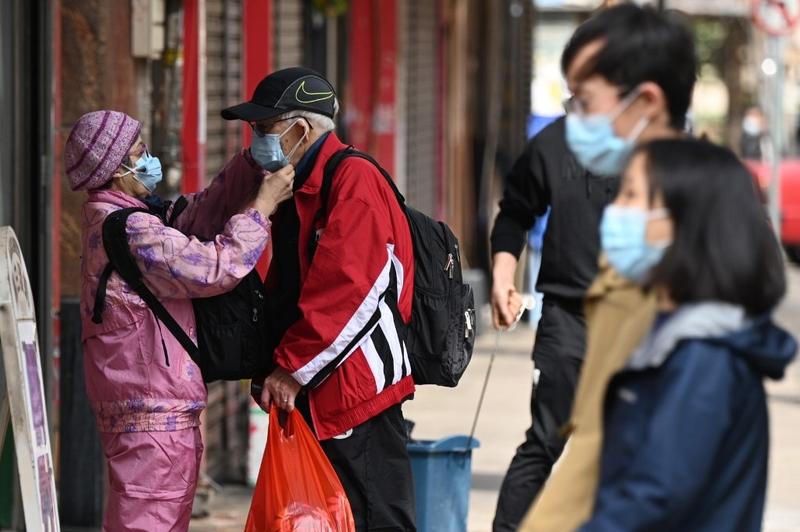 The new cases included 102 local infections, or double the 51 cases reported on Sunday. Forty-two of the new infections were untraceable, Chuang Shuk-kwan, head of the Centre for Health Protection’s (CHP) communicable disease branch, said at a regular briefing.

The new cases included 102 local infections, or double the 51 cases reported on Sunday. Forty-two of these new infections were untraceable, said Chuang Shuk-kwan, head of the Centre for Health Protection’s communicable disease branch

Monday’s imported cases included two from Nepal and one each from Indonesia, the Philippines and Dubai while there were 50 preliminarily positive local cases, Chuang added. Hong Kong’s tally of confirmed infections rose to 9,664.

Of the 42 patients of unknown origin, 20 were residents of Yau Tsim Mong district, including 10 who were living in the areas subject to mandatory testing, she added.

The city has seen 661 local cases since Jan 4, including 160 Yau Ma Tei residents, according to Chuang. Among the infected residents, 120 people were subject to compulsory testing.

“(The high infection) number I think is partly due to the result of compulsory testing, which is expected...This signifies there are still quite significant silent transmissions in the community, especially in the Yau Ma Tei area,” Chuang said.

Meanwhile, an 86-year-old woman who died on Monday became the city’s 163rd coronavirus-related fatality. The patient, who had underlying illnesses, was hospitalized on Jan 3 due to fever and her condition worsened before she succumbed to the disease, the Hospital Authority’s Chief Manager Linda Yu said at the same briefing.

Also on Monday, the Hong Kong government said the number of hotel rooms available for its quarantine hotel program would be reduced by 2,000 starting Feb 20, as fewer people were expected to fly to the city next month compared to when the arrangement took effect on Dec 22 last year for holiday returnees.

A total of about 10,000 rooms will be provided by 36 hotels from Feb 20 to April 20, Secretary for the Civil Service Patrick Nip Tak-kuen said at a separate briefing.

“As the government tightened the (hotel) quarantine rules to 21 days for overseas returnees and banned flights from the United Kingdom and South Africa, we estimate that the number of travelers to Hong Kong may drop slightly in the short term,” Nip said, adding that the latest occupancy rate of quarantine hotels was nearly 60 percent.

In another development, a 12-member expert panel that advises the government on COVID-19 vaccines on Monday determined that there are “more benefits than risks” in using the mRNA-based Fosun-BioNtech vaccine.

“Regarding the outbreak situation in Hong Kong at present, we advise the health authorities to approve the use of this vaccine to prevent COVID-19,” Wallace Lau Chak-sing, a clinical immunologist at the University of Hong Kong, said at a separate briefing.

“The panel will submit the suggestions to the Food and Health Bureau for consideration. … the advisory panel will also disclose our professional advice to members of the public,” said Lau, who is also the convener of the panel.

He added that the panel will continue asking Fosun to provide updated clinical data, particularly regarding side effects, as multiple deaths were reported in Norway and Germany after vaccination.

The University of Hong Kong's leading microbiologist Yuen Kwok-yung visited Fung Wah Estate Hiu Fung House in Chai Wan together with a team from CHP late on Monday afternoon and he recommended that all No. 13 units from the 12th floor downwards should be evacuated.