By Zhang Zhihao and Zou Shuo in Beijing 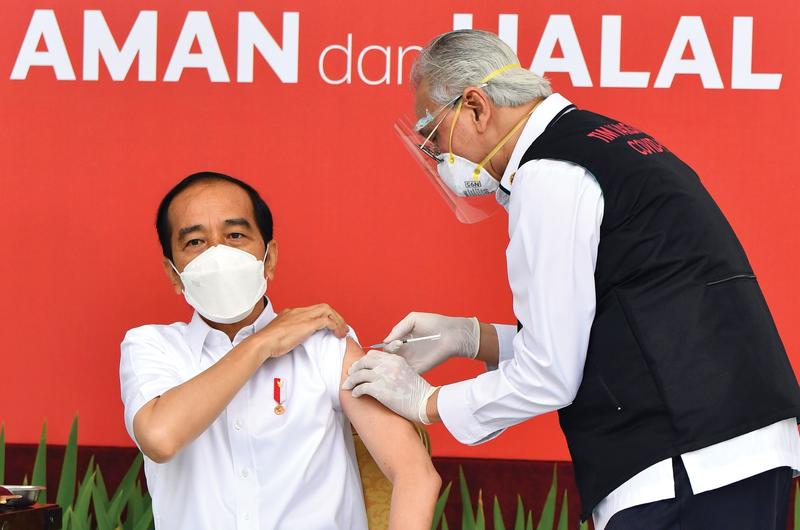 Ajab in the arm is in need across the world.

Indonesian President Joko Widodo did not hesitate on Jan 13 to receive a COVID-19 vaccine shot developed by Chinese biopharmaceutical company Sinovac Biotech, thus becoming the first Indonesian vaccinated and to show that the vaccine is safe.

Neither did Turkish Health Minister Fahrettin Koca who did the same after Sinovac’s vaccine was granted emergency authorization on Jan 13. Following suit the same day were also people in Jordan.

In Jakarta, after President Widodo, also known as Jokowi, the Indonesian military chief, the national police chief and the health minister, among others, were also vaccinated.

Indonesia’s Food and Drug Control Agency (BPOM), which on Jan 11 approved Sinovac Biotech’s COVID-19 vaccine for use, said interim results of its late-stage trials in the country showed an efficacy rate of 65.3 percent.

The number of COVID-19 cases worldwide has surpassed 90 million, reaching 90,054,813 as of Jan 13, according to the latest data from the World Health Organization.

Yin Weidong, founder and chairman of the Sinovac board said, in a news briefing on Jan 13, that based on available data CoronaVac’s trial in Turkey showed the vaccine had an efficacy rate of 91.2 percent against COVID-19, while the one in Indonesia had a protection rate of 65 percent.

A spokesman for Sinovac told China Daily that the discrepancy in the efficacy rate for the vaccine, which is undergoing phase 3 clinical trials in Brazil, Indonesia, Turkey and Chile, is due to the different designs of the trials and the data should not be used for comparison without proper context.

In Brazil, Chinese and Brazilian experts cautioned against misinterpretation of the 50.4 percent efficacy rating from the Brazilian trial of CoronaVac, a COVID-19 vaccine candidate made by Sinovac Biotech. They said the figure only describes the protection rate under the most stringent conditions, many of which were not included in similar studies done by other vaccine developers.

Natalia Pasternak, president of Brazil’s Science Question Institute, a nonprofit organization that promotes scientific literacy, said CoronaVac may not be the perfect vaccine against COVID-19, but it is a vaccine that is compatible with Brazil’s local production, cold chain logistics and distribution networks.

“We have a vaccine that is perfectly capable of preventing disease and death,” she said, adding that the CoronaVac’s relatively low efficacy rate under difficult conditions should not be used to justify not using this vaccine.

On Jan 12, officials and researchers from the Sao Paulo-based Butantan Institute, which is responsible for running the phase 3 clinical trial for CoronaVac in Brazil, announced they had submitted new data on the trial’s progress to the national health regulator for emergency use approval.

Studies showed the vaccine was 100 percent effective in preventing severe cases, and had a 78 percent efficacy rate in preventing mild to severe cases of COVID-19 as well as an excellent safety profile. It also has logistical advantages as it can be stored in a standard refrigerator at 2 to 8 C.

However, when all testing volunteers were considered, including those with “very mild” cases of COVID-19 that required no medical assistance, the total efficacy rate drops to 50.4 percent.

Many media outlets have taken this figure out of context and have criticized the Chinese vaccine, but experts stressed that this number alone is not a realistic depiction of the vaccine’s potency in a normal population, nor is it a justification not to use the vaccine, which has been proved to be safe, easy to store and transport, and is effective in preventing severe cases.

However, experts also said it is difficult to evaluate the true efficacy of vaccine candidates based on limited information from news releases, rather than detailed studies published in peer-reviewed journals.

Ricardo Palacios, medical director of clinical research at the Butantan Institute, said in a news briefing on Jan 12 that the inclusion of the mild cases represented the most stringent test for the vaccine, characterized by covering the broadest number of symptoms and high exposure to COVID-19, as the recipients were frontline health workers.

“We deliberately chose the most challenging conditions, and wanted to capture even the subtlest of symptoms. These criteria have not been included in similar studies elsewhere,” he said, adding that if a vaccine can succeed even in the most demanding setting, “it would prove the vaccine would work well in normal conditions”.

Rosana Richtman, a consultant for the national immunization program of Brazil’s Ministry of Health, said in the news briefing that the “most important number is 78 percent (efficacy rate)”, which was first released by the Butantan Institute last week.

“A 78 percent effective vaccine can reduce the workload of our medical workers and alleviate the fear caused by the novel coronavirus to our people,” she said. “The best vaccine is the one that is available to our people.”

Across the world, inoculation with several vaccines rolls out in China, the United States, and the United Kingdom among other countries. India has scheduled the launch of its vaccination drive on Jan 16 and Russia is set to start soon.

China, which has seen a sudden spike of confirmed cases in Hebei and Heilongjiang provinces, is likely to face a “major test” in containing the epidemic during this year’s Spring Festival travel rush, which begins on Jan 28 and ends on March 8, said Feng Zijian, deputy director of the Chinese Center for Disease Control and Prevention.

Hebei province reported 90 new confirmed COVID-19 cases and 15 asymptomatic carriers on Jan 12, the provincial health commission said on Jan 13. It was the highest daily increase in confirmed cases in the province since the cluster infection broke out on Jan 2. Heilongjiang declared a state of emergency on Jan 12 and, as of Jan 13 afternoon, the province had reported 57 confirmed cases since Jan 10.

Li Lei in Shijiazhuang, Sergio Held in Cajica, Colombia, and Leonardus Jegho in Jakarta contributed to this report.