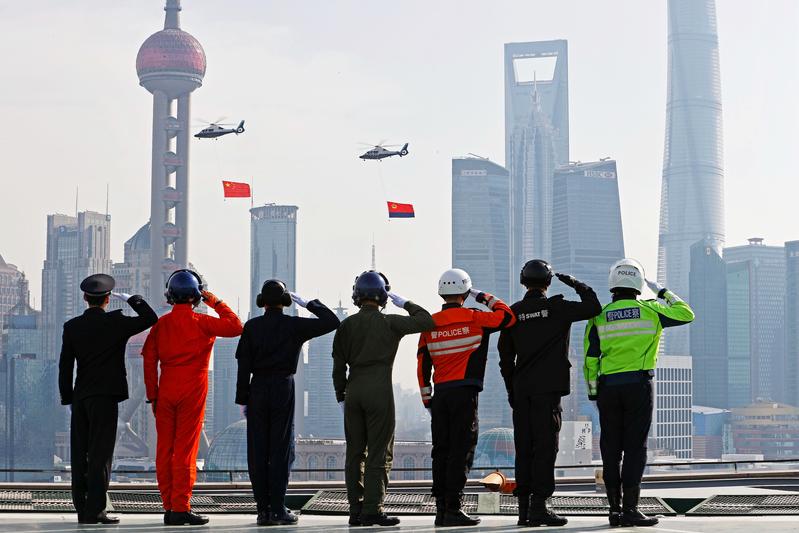 President Xi Jinping is calling for solid progress in advancing the high-quality development of political and legal work, which generally refers to judicial, procuratorial and public security affairs.

Greater efforts should be made this year to follow a more systematic and law-based approach, and to focus on such work at the primary level, according to an instruction issued by Xi, who is also general secretary of the Communist Party of China Central Committee and chairman of the Central Military Commission.

Xi also sent sincere regards to all police officers, as Jan 10 was the first Chinese People’s Police Day. He called on them to take concrete actions to better safeguard people’s happiness, national security and social stability.

To promote the building of a peaceful China and provide a safer environment for people, Guo said while addressing the conference, political and legal departments nationwide should intensify efforts to promptly resolve risks and effectively prevent them from rising.

He highlighted the importance of improving the modernization of social governance, ordering judicial, procuratorial and public security agencies to strengthen the evaluation of risks and try their best to curb major hidden contradictions at the start and at the grassroots level.

Guo asked officials to go to the front lines to understand the demands of ordinary people, adding that conflicts — including those regarding marriage, neighborhood or debts — could easily lead to public security disorder and should be carefully examined and efficiently resolved to keep disputes from getting worse and individuals from taking extreme action.

He called for a long-term mechanism to fight organized crime, noting that the battle against offenses that often give rise to complaints among the public — including drugs, gambling, fraud, food safety and environmental crimes — should be increased.

Regarding risks in new industries and those brought by new technologies, Guo said, “We have to stick to the bottom line of safe development.”

He called on the agencies to do more research on information technologies and new businesses — such as livestreaming, online loans and the sharing economy — and promote pertinent legislation and rules in order to improve their ability to identify and control the risks as well as to ensure internet enterprises and online platforms can develop in line with the laws and regulations.

“We should be highly vigilant against risks in the private equity, online loans and long-term rental apartment industries, which have been affected by the COVID-19 pandemic, boosting our coordination with financial and supervisory institutes to guarantee people’s personal and property safety,” he said.

To meet people’s new demand on the rule of law, Guo said more legal support should be given to livelihood-related sectors. Public services, including traffic management, household management and legal aid, should also be improved, he added.

Guo called for greater efforts to educate judicial talents in handling foreign affairs and emphasized that corruption and discipline violations in the legal and political agencies must be eliminated.

Xi’s instruction, with the requirements forwarded, was lauded among those attending the conference. They took it as a clear direction for their immediate work.

He Hengyang, prosecutor-general of the Chongqing People’s Procuratorate, regarded Xi’s instruction as a guideline for legal and political departments in the new era, adding that the procuratorate will focus more on work at the primary level, strengthening its supervision and improving its work capacity.

Dong Xiaofei, president of the people’s court in Quxian county, Sichuan province, said the court will play a bigger role in promoting the modernization of social governance, improving the building of technology-friendly courts and diversifying means to help residents resolve disputes.

Sun Andong, a police officer from Zhejiang province who was encouraged by Xi’s regards for the nation’s first Chinese People’s Police Day, said: “I’ll be careful and patient to better resolve every dispute, trying my best to nip conflicts in the bud.”