If winter comes, spring cannot be far behind 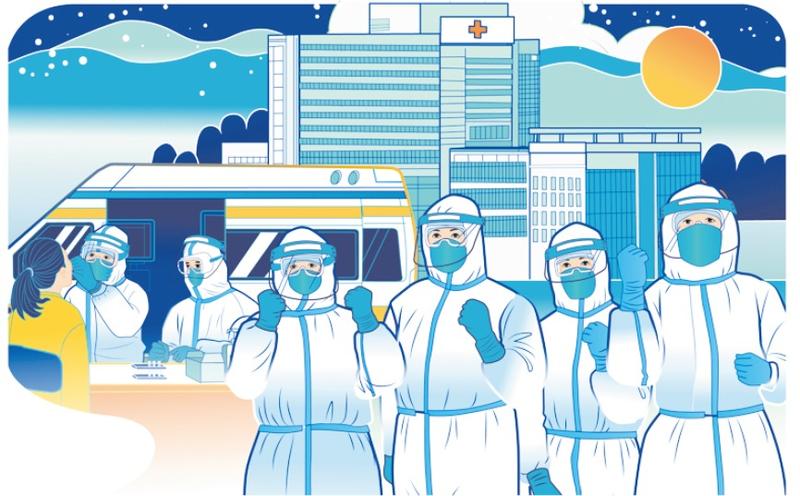 The latest outbreak of novel coronavirus infections in Hebei province should once again remind people of the importance of epidemic prevention and control. It should also make clear that far from being relaxed, there is an increasing need to maintain, if not to tighten, prevention and control measures, or else new outbreaks could again jeopardize China's social and economic development.

That one high-risk and 40 medium-risk areas have been earmarked in Hebei shows that it will never be too cautious to control the epidemic.

Before the latest outbreak, China had largely contained the spread of COVID-19 pandemic. The sporadic outbreaks of cases in recent months indicate that cold temperatures in most parts of China allow the virus to survive much longer than usual on frozen aquatic products as well as on the surface of other things－for instance, the wrappings of auto parts have tested positive for the virus in some places. This has made it more difficult to prevent the virus from being transmitted to people from different sources. And if the chain of transmissions is not cut, social and economic activities will suffer.

It is time therefore to review the relationship among epidemic control, economic recovery and consumption growth.

Take the intertwined relationship between economic recovery and consumption growth. Even before the epidemic first broke out early last year, China had realized that the world was undergoing unprecedented changes. In fact, the 2020 Central Economic Work Conference had said China faces the complicated situation of mounting risks and challenges at home and abroad, and the economy is under new downward pressure, so China should give top priority to maintaining economic stability and improving the lives of its people in 2021.

China has made successful strides in upgrading its economic structure. Statistically speaking, the economy's dependence on exports has declined from 60 percent to nearly 30 percent, while domestic demand now contributes to more than 90 percent of economic growth. In line with this trend, after having largely controlled the epidemic at home by April 2020, China resumed production and other economic activities, and registered positive economic growth in the second quarter after experiencing economic contraction in the first quarter.

Epidemic control and consumption growth have an inextricable relationship. Before the entire population is vaccinated, public health personnel as well as community and transport workers have to bear the major responsibility of preventing and controlling COVID-19. While stringent prevention and control measures do cause inconveniences, the Chinese people have chosen to prioritize public interest in order to contain the pandemic. By contrast, in some Western countries, people protested against the implementation of strict prevention and control measures.

China has managed to largely contain the COVID-19 pandemic mainly due to the strong leadership of the Communist Party of China and the commitment and sacrifices of the people, as well as changing social behaviors. People have responded positively to the strict prevention and control measures because of the new living and consumption habits they have acquired because of China's economic restructuring and upgrading, which Western countries are yet to achieve.

Moreover, thanks to the rapid development of the digital economy, people can purchase their daily necessities and more on online shopping platforms while sitting at home. And the fact that the majority of Chinese families have maintained their habit of saving money has enabled them to support themselves during these difficult times.

Further, economic recovery and epidemic control reflect the relationship between the economy and society, and China's success in largely containing COVID-19 is also a result of the hard work of the national public health management service.

At the Fifth Plenary Session of the 19th Communist Party of China Central Committee in October 2020, Xi Jinping, general secretary of the CPC Central Committee, said that the COVID-19 epidemic had impacted China's economy, but under the Party's leadership and due to the Chinese people's efforts, China managed to virtually control the epidemic and was leading the global economic recovery. Xi's remarks showed how to balance epidemic control, economic recovery and consumption growth.

At the 18th CPC National Congress in 2012, the leadership vowed to put people first and develop the economy and society together. That the strategy has produced remarkable results is evident from the fact that epidemic control, economic recovery and consumption growth are now aimed at improving people's livelihoods and living standards. In this regard, the country should accelerate the development of the "dual circulation" development paradigm, which is based on the domestic economy and aims to integrate the domestic economy with the global economy to develop new advantages for China in global cooperation and competition.

As for the new outbreaks of infections, the authorities should consider adopting different approaches in different regions. So while Hebei is focused on containing the resurgence of cases, other provinces and regions should attach the same, if not more, importance to economic development while maintaining the existing prevention and control measures.

Twenty-four provinces and municipalities including Beijing and Shanghai have already called on their residents to stay where they work during the Spring Festival holiday, so as to reduce the chances of being infected with the virus.

In some provinces and regions, local governments and enterprises have promised a bonus for people who stay where they work for Spring Festival. And while some have promised to provide better meals for those who choose to carry on working during the festival, others have encouraged residents to adjust their holidays to avoid the travel rush. And many localities have notified that people who return from even low-risk areas are required to provide certificates for a negative nucleic acid test result.

Perhaps the authorities should also consider rewarding people with vacations after people are vaccinated and the pandemic is effectively controlled, because it will encourage people to stay where they work and increase consumption, which in turn will fuel domestic growth.

The author is a social policy researcher at the Chinese Academy of Social Sciences.