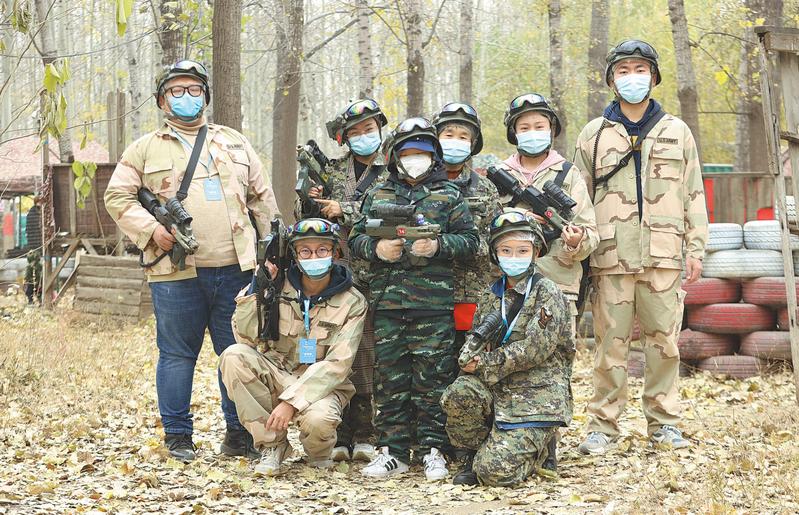 An 11-year-old boy with leukemia (middle) fulfills his wish to play a real-life version of the video game Counter Strike with volunteers from Childream in November. (PHOTO PROVIDED TO CHINA DAILY)

Mu Yi does not have the cape or a cloak of a superhero, but there is no disputing the fact that this boy of 5 has shown a courage that puts him firmly into that category.

Yi has been fighting stage 4 neuroblastoma since he was 3 years old.

These wishes are just like light, which can drive out the darkness, and granting the wishes can help these children to see hope and love in their lif

In his young life he has had tumor surgery, two stem cell transplants and dozens of chemotherapy and radiation sessions. The cancer that starts in nerve cells outside the brain returned in November. Doctors at the Shandong Cancer Hospital and Institute in Jinan, Shandong province, suggested two brain operations.

"I don't know how long my son can live. As a father, I just want to let him experience the common things and joys that his peers experience and bring him love from the world," Mu Cong, a veteran who was part of the rescue mission after the Wenchuan earthquake in 2008, says.

He wants to help his son to make the most out of his life. They have made a New Year wish list, which includes 50 things that many of us might take for granted, such as a movie, a beach trip and a day in kindergarten.

The boy's wish list has gone viral online and touched hearts across the country. 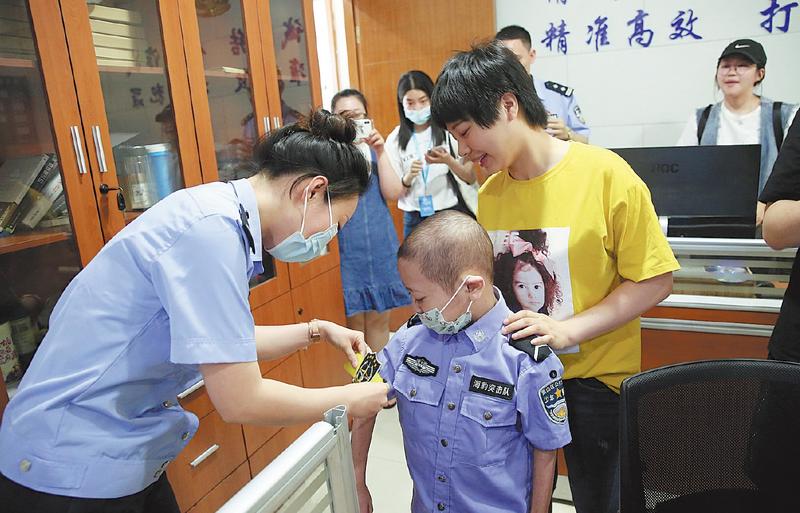 An 8-year-old boy with leukemia becomes a police officer for a day in May 2019. (PHOTO PROVIDED TO CHINA DAILY)

Numerous people have contacted the father to help the boy to fulfill his wishes and donated money to support the family to cover the costs of the illness.

"We have received so much kindness, which makes me believe that no matter how hard it can be, love can help us conquer all the difficulties," Mu Cong says.

One of the boy's wishes－meeting Ultraman－has been a hot topic on social media Sina Weibo, which has been viewed more than 290 million times so far. Ultraman is a Japanese superhero TV series. The silver-and-red-suited hero and protector of peace is Yi's idol.

"It is difficult to explain to a boy about why he has to go through all this pain and therapies. When he cannot bear the pain, I always tell him that he has monsters in his body and he should fight them like his hero Ultraman always does," the father says, adding that his son has been excited to hear that Ultraman will visit him.

Under the coordination of charity organization Childream, and China Shanghai Character License Administrative Co, the copyright representative of Ultraman's creator Tuburaya Productions in China, the official Ultraman will visit the boy when he is in stable condition, Xu Wenjun, founder of Childream, says.

Yi is the latest child who has been contacted by Childream to make a dream come true. 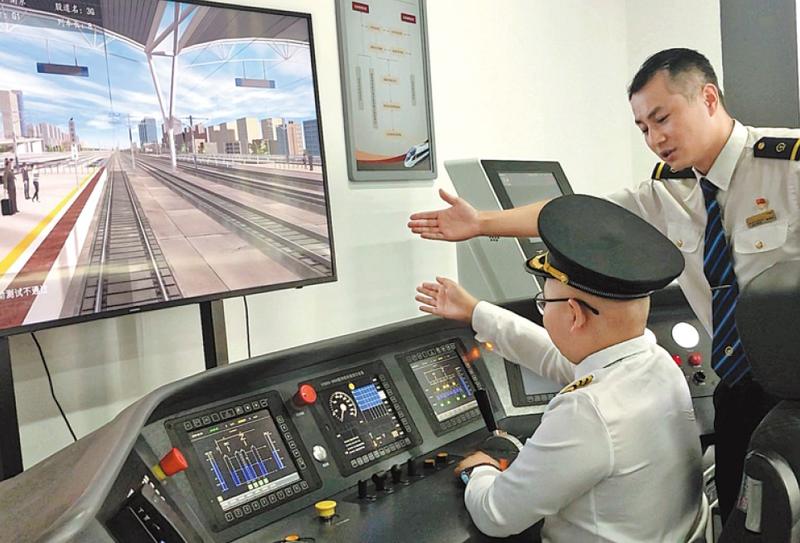 As of December, 156 children have been granted their wish thanks to the charity organization, according to Xu, 33.

It aims to help children and teenagers, aged between 2 and 18, with a critical illness, realize their dreams.

Take cancer, one of the main causes of non-accidental deaths in children, for example. According to the first Global Burden of Disease Study to assess childhood and adolescent cancer published in The Lancet Oncology journal, the number of new cancer cases in children and adolescents (aged 0-19 years) was around 416,500 globally in 2017. Data from the Cancer Hospital of the Chinese Academy of Medical Sciences showed that recorded childhood (younger than 15) cancers in China rose from about 92 new cases per million children in 2001 to 115 per million in 2010.

"For these children, medical care and treatment matters, but what about their dreams or life goals," Xu says, adding that realizing their dreams may give them strength to fight the illness.

The documentary Batkid Begins gave Xu the answer. It tells about the day in 2013 that the city of San Francisco transformed itself into Gotham to help a 5-year-old boy who had leukemia see his dream come true.

"The film touched the softest and deepest part of my heart and I immediately searched online and found that there were no such organizations in China at that time," Xu remembers.

He studied the operation of the Make-A-Wish Foundation in the documentary, a nonprofit organization founded in the United States in 1980. It aims to grant life-changing wishes for children with life-threatening illnesses. The Shanghai chapter of Make-A-Wish was set up in 2017.

In 2016, he quit his job as a logistics engineer and persuaded a friend to participate in the project. With a total of 200,000 yuan (US$31,000) as a startup fund, they set up Childream in Hangzhou, Zhejiang province.

"It was not easy at the beginning," Xu says, adding that most parents had not even thought about the future, let alone their children's dreams or wishes, because for them, the most important thing was to get enough money for treatment. 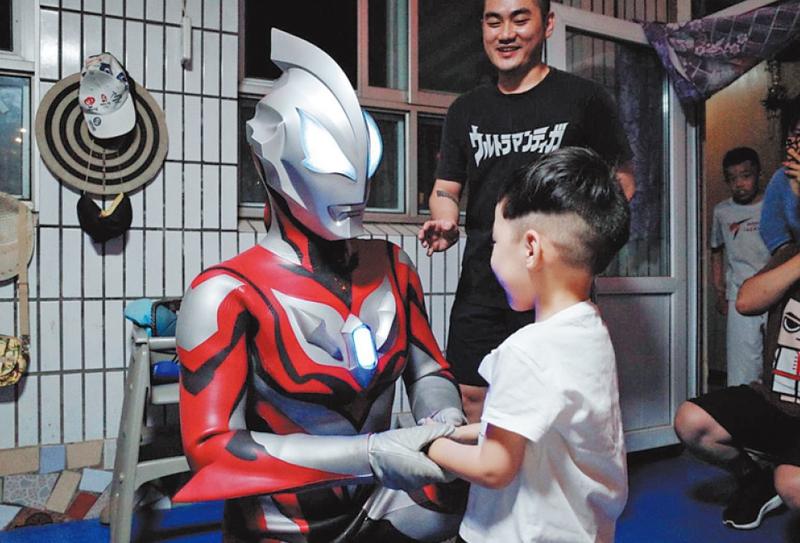 It has taken Xu four months to find the first wish, after making hundreds of calls, searching numerous posts online and lots of talking. It has been from an 18-year-old girl with leukemia, who dreamed of entering the China Academy of Art. Persuading her family, Xu helped the girl to get an opportunity to study at a painting studio for free in Hangzhou when she got better.

The girl received a transplant in April 2017 and three months later, she started painting in the studio.

A study on the effects of the wish-making intervention on psychiatric symptoms and health-related quality of life of children with cancer published in Quality of Life Research in 2015 showed that children who experienced a wish coming true demonstrated a greater health-related quality of life, with a significant reduction in their perceptions of their own physical limitations.

Childream has volunteers across the country. To reach more children, it has opened accounts on social media platforms, including Sina Weibo, Bilibili and Douyin. It has made national headlines for its wish-fulfillment deeds, from fanciful to practical.

Some children like 5-year-old Yi want to meet their favorite anime character or celebrity, such as Ultraman; some want to experience a day as a police officer, firefighter or racing car driver; some wish to travel to somewhere; and some want to open a concert.

Some wishes need the participation of thousands of people. In 2017, under the coordination of Childream, tens of thousands of people in Hangzhou helped two sick children－Jin Qianzhe, 8, and Mao Xu, 9, both with Prader-Willi syndrome, a genetic disorder that affects development－to fulfill their dreams of becoming a police officer and a doctor for one day.

"These wishes are just like light, which can drive out the darkness, and granting the wishes can help these children to see hope and love in their life," Xu says.