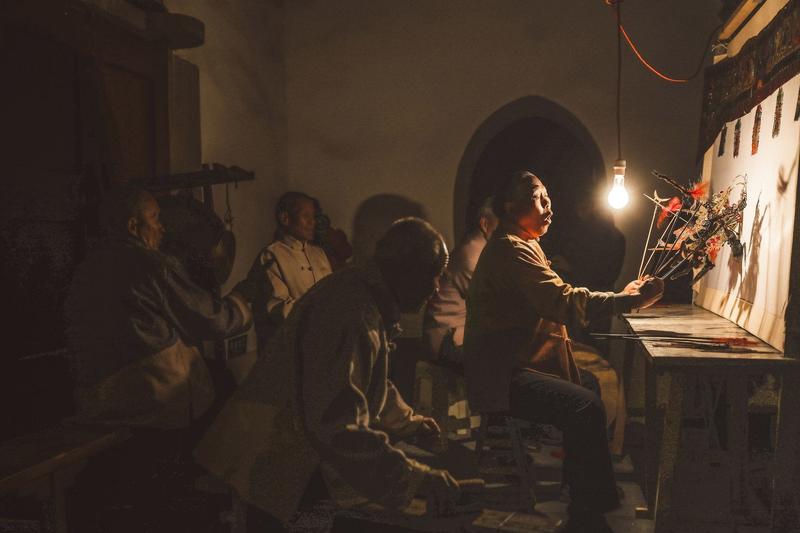 Elderly performers have carried on the tradition of shadow play, which incorporates puppet-making with folk music, opera-singing and storytelling, in Shaanxi province. (PHOTO PROVIDED TO CHINA DAILY)

The lights go out and the show begins. Silhouettes of leather-made figurines are projected onto an illuminated screen, delineating stories with the accompaniment of musical instruments, opera-singing and storytelling.

Long before the invention of films, with the earliest text record dating to 1,900 years ago, the screen of shadow play provided a pioneering means of entertainment, its venues ranging from palaces to markets.

The story explores a diaspora theme. The protagonist Tang Suo, an artist who has lived in Italy for years, comes home to Yan'an, Shaanxi province, for Lunar New Year. The reunion dinner sees a dispute between the protagonist and his father, who disapproves of him living far away from home.

Su Dan, a professor at Tsinghua University and director of the project's management committee, points out the imperativeness and complexity of innovating upon shadow play.

He says shadow play is a comprehensive art form that incorporates painting, sculpture, performance and Chinese opera. Hence, its innovation must take all these aspects into consideration.

"The implication of this experimental play is an attempt to rejuvenate the ancient art form of shadow play and rid it of its confines," Su says.

The denouement of the play sees the reconciliation between the protagonist and his father, unconventionally with the Italian song Santa Lucia rendered with a Shaanxi regional opera-singing style. 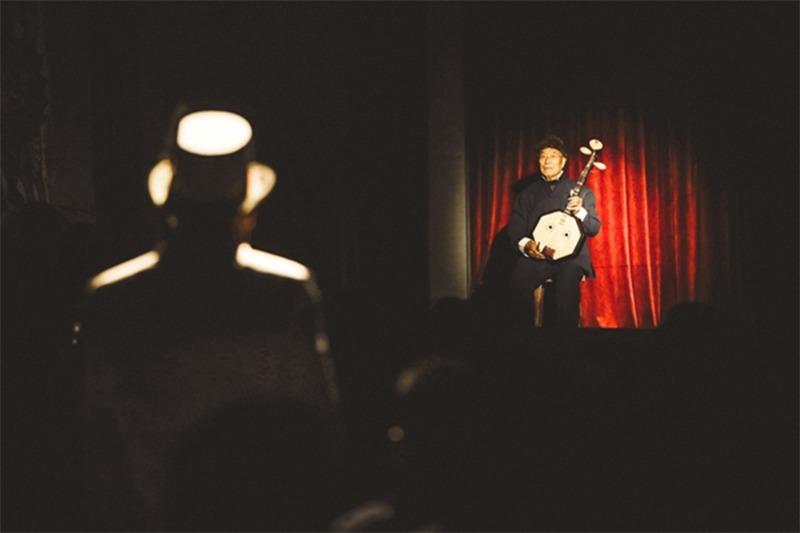 As the conflict escalates, the father wants to find an effective way of communicating with his son. As the son has difficulty comprehending the dialect used in a local art form, the father chooses to sing the Italian song that is well-known in China, according to the play's director Zhang Jian.

To get the artists to learn singing in lyrics translated into Mandarin instead of their regional dialect was not an easy task. It took 79-year-old Wang Jinfa, who plays the father, some 50 days to learn how to sing the song.

"For 70-year-olds to accept novel things, they must have the willingness and a proactive attitude," Zhang says.

"We spent almost a year visiting and interviewing elderly artists, and establishing a consensus (to make changes)."

He stresses the importance of making connections between shadow play in its old form and modern life.

"In the old days when shadow play flourished, our village had such performances all the time. My teacher used to perform at least 300 days every year. People from neighboring villages would come to our village in the middle of the night just to see a performance," Wang says.

He recalls that those days were his happiest, traveling around performing and attending other performances. "I used to travel for 40 to 50 days performing. I was doing something I enjoyed, and I got paid for it, as well as lodging. I couldn't be happier." 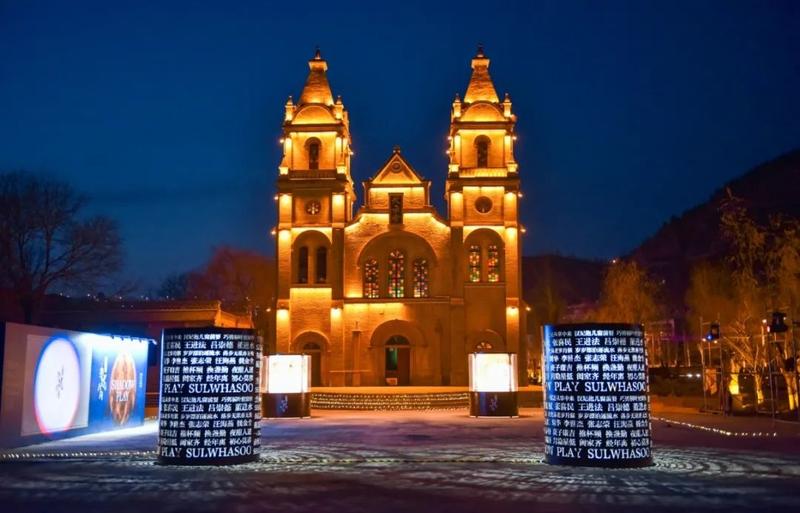 The show is staged in a church in Yan'an, Shaanxi province. (PHOTO PROVIDED TO CHINA DAILY)

Meanwhile, he says he is saddened by the decline of shadow play. In recent years, requests for performances have reduced, and now he performs shows only a few times in a year. Most of his students are over age 50, which is another worrying prospect.

Wang is working with film and stage projects to innovate upon shadow play, including singing Chinese opera in a play that replaced shadow puppets with real performers.

"The audience enjoyed the performance a lot, including a lot of small children. So I won't say that shadow play is too traditional and obscure. As long as the method is right, everyone can enjoy it, especially something this good," Wang says.

The play Chang Zhi Gui took place in a church at the former site of the Lu Xun Academy of Art in Yan'an, an institution established in 1938 during the War of Resistance Against Japanese Aggression (1931-45), aimed at cultivating artistic and literary talent. The venue in its glory days witnessed classic performances, including Chinese opera The White-Haired Girl and Chinese song The Yellow River Cantata.

Zhang says to maximize the acoustic quality of the building, no amplifier was used in the recent performance, and the space was also fully put to use, with performances happening not only on the front stage, but in every corner of the church.

"The arrangement was initially a necessary adaptation because of the limited church space, but limitations often give rise to unexpected highlights," Zhang says.

Each year the project focuses on researching, promoting and protecting an intangible cultural art form. 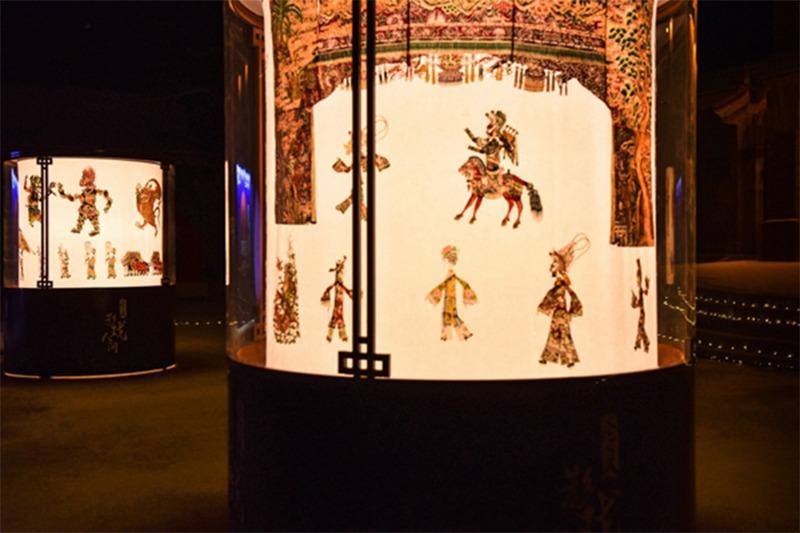 Art installations made of leather puppets are also on display at the venue. (PHOTO PROVIDED TO CHINA DAILY)

The team went on three field trips to Shaanxi, visiting and interviewing experts and practitioners of shadow play. It also collected texts, photos and videos, and hosted seminars and workshops to discuss innovation and inheritance.

"Every year we invite scholars and artists, and together discuss the problems faced in taking intangible cultural heritage forward, exchange our experiences and present the work we have done in the past year," Su says.

An unexpected finding during their trip last year was a manuscript from 71-year-old shadow-play artist Zhang Zhirong, according to Chen Anying, the project's chief expert.

"During our discussions, we came to realize this artist is different from others. He researches the art form in addition to performing. Then, he showed us the shadow-play scripts he had collected and written," Chen says.

"He pulled out manuscripts from a tattered envelope and told us that it was a history of the regional shadow play."

The manuscripts were written by Zhang Zhirong 10 years ago. He can now publish them as a book as part of the intangible heritage fund project.

The fund supported lacquer craft of Shanxi province in 2018, metalwork of Yunnan province in 2019 and Shaanxi shadow play in 2020.This year, Cantonese embroidery will be its focus.