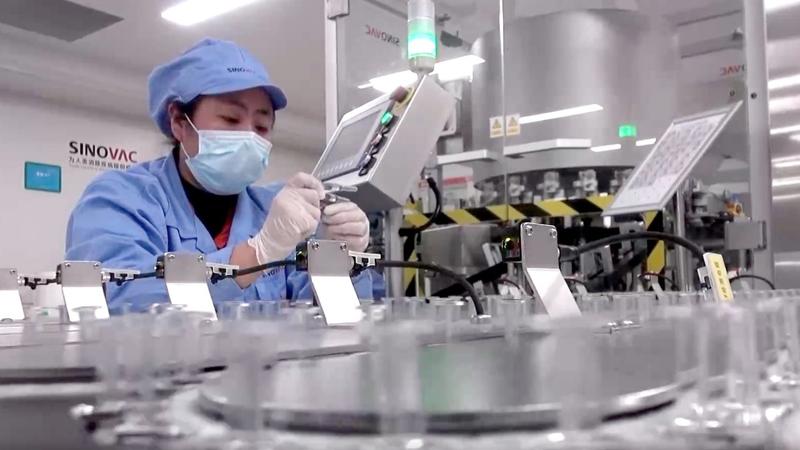 This undated photo shows a worker in the production line of Sinovac's COVID-19 vaccine. (PHOTO / XINHUA)

BEIJING / SHIJIAZHUANG / SHENYANG - The Chinese mainland on Wednesday reported 138 newly confirmed COVID-19 cases, of whom 124 were locally transmitted and the rest arrived from outside the mainland, the National Health Commission said Thursday.

Of the locally transmitted cases, 81 were reported in north China's Hebei province and 43 in northeast China's Heilongjiang province, the commission said in its daily report.

Hebei on Wednesday reported its first COVID-19 death from the current outbreak. The commission told Xinhua that the case in question was a female patient with pre-existing health problems. She died on Wednesday afternoon.

Of the newly registered confirmed cases, 75 were in the provincial capital Shijiazhuang, including nine individuals who were previously asymptomatic. The other six cases were reported in the city of Xingtai.

Of the asymptomatic cases, three were reported in Shijiazhuang and one in Xingtai.

One death related to the disease was reported in Hebei on Wednesday, with no new suspected cases reported

According to the Standing Committee of the Hebei Provincial People's Congress, the annual session of the provincial legislature was postponed pending further notice.

The meeting was originally scheduled on Jan. 25 in Shijiazhuang, the provincial capital that has reported the bulk of the recent COVID-19 cases in Hebei.

The Standing Committee of the Liaoning Provincial People's Congress also said in an announcement that the provincial legislative meeting will be slated for a later date.

The total number of confirmed COVID-19 cases on the mainland reached 87,844 by Wednesday, including 885 patients still receiving treatment, 24 of whom were in severe condition.

A total of 82,324 patients had been discharged following recovery on the mainland, and 4,635 had died of the disease, according to the commission.

There was one suspected COVID-19 case on the mainland on Wednesday, and 30,963 close contacts remained under medical observation.

ALSO READ: WHO working with Sinopharm, Sinovac ahead of emergency use

A total of 599 asymptomatic cases were under medical observation, of whom 252 arrived from outside the mainland.

By the end of Wednesday, 9,385 confirmed COVID-19 cases, including 161 deaths, had been reported in the Hong Kong Special Administrative Region (SAR), 46 cases in the Macao SAR, and 842 cases, including seven deaths, in Taiwan.

A total of 8,584 COVID-19 patients in the Hong Kong SAR had been discharged from hospitals following recovery, 46 in the Macao SAR, and 731 in Taiwan.