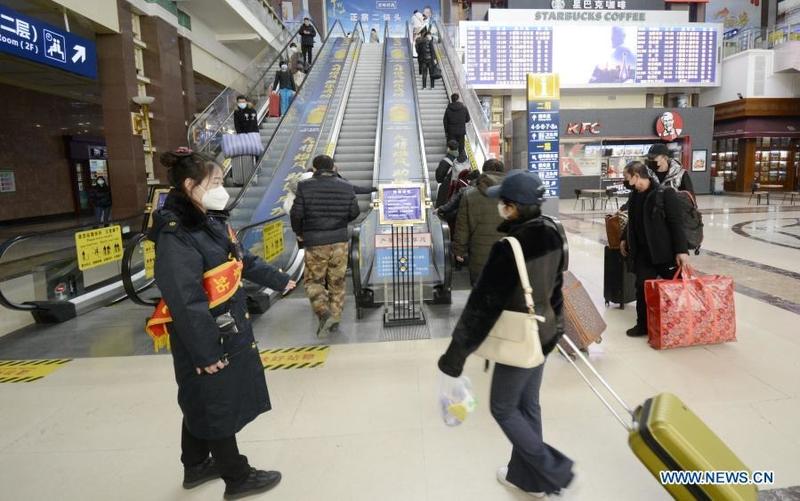 BEIJING - A Chinese health authority spokesperson on Wednesday described the country's COVID-19 prevention and control situation as "complex" and "challenging."

China has seen multiple areas report both sporadic cases and clusters of infections, said Mi Feng, spokesperson for the National Health Commission, noting that the latest resurgence of the virus is characterized by its long duration and its spread to a wide range of regions.

ALSO READ: Expert: Hebei outbreak can be contained in a month

Mi said at a press conference that there are more rural cases and affected elderly people during this wave. Community and intergenerational transmission have also been observed in some areas.

With the 2021 Spring Festival travel rush, or "chunyun" drawing near, China is expected to see increasing numbers of international and inter-provincial travellers.

Under such circumstances, the country's epidemic control and prevention capacity will be once again put to the test, said Wang Bin, an official with the commission.

The commission will clarify the responsibilities of all departments as well as travellers so as to intensify epidemic control and prevention during the forthcoming travel rush, according to Wang.

The commission has also advised the public against large-scale gatherings during the holiday as well as unnecessary trips, Wang added.

Meanwhile, China will expand the target population for COVID-19 vaccination to include elderly people aged over 60 years old, said Wang.

Wang said that the move was due to increasing data from clinical research on vaccines, a growing supply of vaccines, and the need to better control the outbreak.

"The current vaccination campaign covers people aged 18 to 59 who are at a higher risk of infection and transmission," Wang said.

However, Feng Zijian, deputy director of the Chinese Center for Disease Control and Prevention, said at the press conference that the new round of asymptomatic COVID-19 cases reported by far are unlikely to cause large-scale infection as long as the public takes protective measures.

Feng said asymptomatic COVID-19 patients carry a small amount of the virus and are less infectious.

It usually requires multiple close contacts for a long period of time without personal protection for asymptomatic cases to cause transmission of the virus, he added.

China's civil aviation regulator has announced the suspension of an Air China flight and a Pakistan International Airlines flight after several passengers tested positive for COVID-19 on recent flights.

A total of five passengers tested positive on Air China's Johannesburg-Shenzhen flight CA868 on Dec 31, 2020, and the flight will be suspended for two weeks starting Jan. 18, said the Civil Aviation Administration of China (CAAC) Tuesday.

Passenger traffic control to be tightened

The Ministry of Transport has called on local authorities to strengthen control over passenger traffic plying in and out of areas designated medium- and high-risk for COVID-19 to curb the latest resurgence in cases.

In principle, inter-provincial and inter-city road passenger transportation, as well as inter-city public transportation in and out of medium- and high-risk areas should be suspended, according to a notice

In principle, inter-provincial and inter-city road passenger transportation, as well as inter-city public transportation in and out of such areas should be suspended, according to a notice issued by the ministry.

Passenger transport lines passing through the administrative area of the counties where the medium- and high-risk areas are located shall not pick up or drop off passengers in these areas, according to the notice.

Efforts should be made to ensure the travel needs of key groups such as medical and nursing personnel, and guarantee transport services for emergency supplies and people's daily necessities, according to the notice.

After the medium- and high-risk areas are downgraded to low-risk, transport authorities should steadily and orderly restore services, according to the notice.