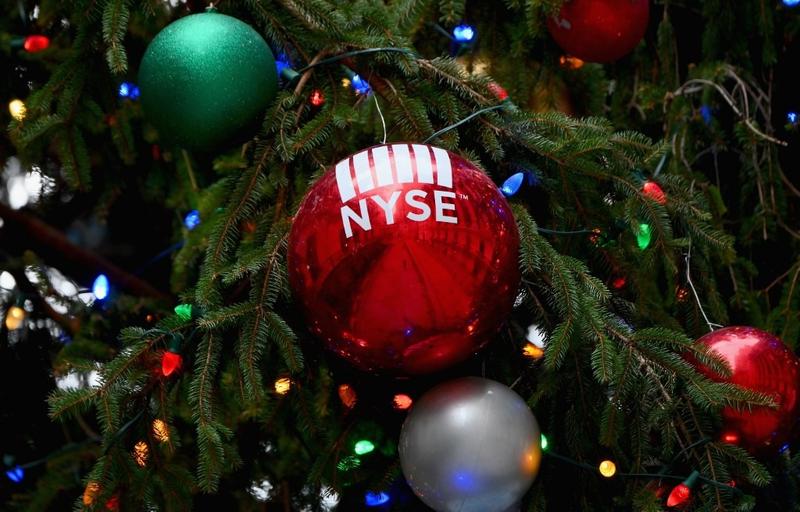 The New York Stock Exchange said it will no longer delist China’s three biggest state-owned telecommunications companies, backtracking on a plan that had threatened to escalate tensions between the world’s largest economies.

NYSE’s U-turn came with scant explanation just four days after the exchange said it would remove the shares to comply with a US executive order barring investments in businesses it said owned or controlled by the Chinese military. NYSE cited “consultation with relevant regulatory authorities” for the reversal in a brief statement late Monday but declined to elaborate further.

Meanwhile, the NYSE Regulation division will continue to evaluate the applicability of a federal government's executive order to the issuers and their continued listing status, said the NYSE.

The about-face, described as “bizarre” by a Jefferies Financial Group Inc analyst, whipsawed investors who on Monday had sold shares of the telecom companies and raced to bet on which Chinese businesses might be delisted next. China Mobile Ltd, China Telecom Corp and China Unicom Hong Kong Ltd all rallied on Tuesday. 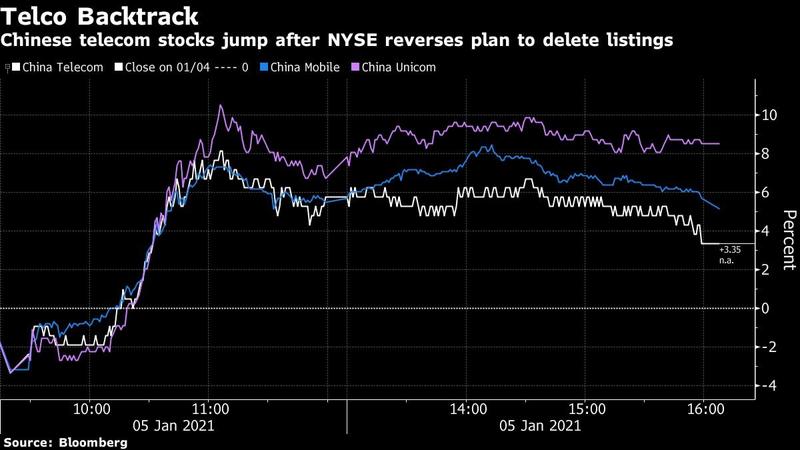 A lack of clarity on why NYSE changed course left investors to speculate over whether it was simply a result of the exchange initially misinterpreting the executive order or something with broader geopolitical implications.

The sense of confusion surrounding the implementation of Trump’s order hasn’t been limited to the NYSE. Index providers FTSE Russell, MSCI Inc and S&P Dow Jones Indices have all said in the past month they would remove some Chinese companies from equity gauges to comply with the order, but their lists of affected stocks have sometimes differed markedly.

The stakes are high for both Chinese and US companies. The former have turned to the American stock market for capital and international prestige for more than two decades, raising at least US$144 billion from some of the world’s largest investors. US companies are keen to maintain their access to China’s vast economy, especially Wall Street banks that gained unprecedented scope to operate in the country last year.

NYSE’s reversal was “quite unexpected,” said Jackson Wong, director of asset management at Amber Hill Capital Ltd in Hong Kong. “Some funds that had an obligation to unload these shares will now need to buy them back. Some investors are also starting to pricing in a scenario that the decision to halt delistings could be a start of a de-escalation in tensions between China and the US.”

China Mobile, the largest of the three, jumped 5.1 percent in Hong Kong on Tuesday. The company’s New York-listed shares surged 10 percent before the official open of US exchanges

Foreign Ministry spokesperson Hua Chunying on Tuesday urged the US to respect the rule of law and the market and protect the legitimate rights and interests of investors.

Hua said the US suppression of Chinese companies will have limited direct impact on relevant companies and will instead hurt the national interests and image of the US as well as the global status of the US capital market.

She urged the US to do more that is conducive to the stability of the global economy and maintain the order of the global financial market.

Calls and emails to the media department of the China Securities Regulatory Commission weren’t immediately returned Tuesday. The CSRC had responded to NYSE’s initial plan by calling it groundless and “not a wise move.” Spokespeople for the US Treasury Department, US Securities and Exchange Commission and the Financial Industry Regulatory Authority didn’t immediately reply to requests for comment.

It’s unclear whether NYSE’s reversal will have any impact on index providers, which help guide investments worth trillions of dollars. FTSE Russell declined to comment on Tuesday, while MSCI and S&P Dow Jones couldn’t immediately be reached.

In separate statements, China Mobile, China Telecom and Unicom said they will continue to monitor developments. China Mobile, the largest of the three, jumped 5.1 percent in Hong Kong on Tuesday. The company’s New York-listed shares surged 10 percent before the official open of US exchanges.

On New Year’s Eve, NYSE said it would delist the three companies to comply with a November order by US President Donald Trump. It was the first time an American exchange had announced plans to remove a Chinese company as a direct result of rising geopolitical tensions between the two superpowers.

“The Trump administration is leaving,” said Orville Schell, director of the Asia Society’s Center on US-China Relations. “That puts a big question mark over anything that is ordered during Trump’s period of presidency.”

“This is the most bizarre series of events we have witnessed in the US during this analyst’s career,” said Edison Lee, the head of telecom research at Jefferies in Hong Kong.

Mo Jingxi contributed to this report