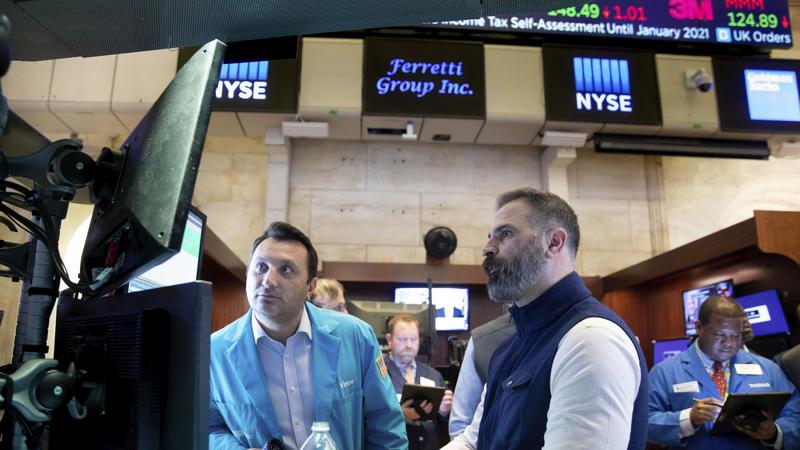 In this photo provided by the New York Stock Exchange, trader Gregory Rowe, center, works on the trading floor on March 20, 2020. (NICOLE PEREIRA/NYSE VIA AP)

China's three telecom carriers said on Monday morning that they regret the New York Stock Exchange's decision to delist their securities, adding that they have complied strictly with the laws and regulations as well as regulatory requirements of their listing venues.

The comments came after NYSE said on its official website on Thursday that it had decided to commence proceedings to delist China Telecom Corporation Ltd, China Mobile Ltd and China Unicom (Hong Kong) Ltd to comply with a US government order.

The comments came after NYSE said on its official website on Thursday that it had decided to commence proceedings to delist China Telecom Corporation Ltd, China Mobile Ltd and China Unicom (Hong Kong) Ltd to comply with a US government order

The three companies said in separate statements that they have not yet received written notices from the NYSE to delist their American Depositary Receipts (ADRs) as of the time when their announcement were posted.

China Telecom, China Mobile and China Unicom said they will promptly conduct investigations and analysis and strengthen their communication and liaison with the regulatory authorities of their listing venues, to protect the lawful rights of themselves and holders of their securities.

The NYSE's decision and actions could increase volatility in the trading volumes and affect the prices of their securities, they added.

Having issued American Depositary Receipts (ADRs) and been listed on the NYSE for nearly or over two decades, the three Chinese firms have complied with the rules and regulations of the US securities market, and are widely acknowledged by investors worldwide, the spokesperson for China Securities Regulatory Commission said.

The commission will firmly support the three firms to protect their rights and interests, and believes that they will handle the adverse impacts appropriately, said the spokesperson.

Some US politicians, at the cost of damaging the global status of their own capital market, have recently made moves to suppress US-listed foreign companies constantly. These moves showed the randomness, arbitrariness and uncertainty of the country's rules and regulations, and were therefore unwise, the spokesperson said.

"We hope the US sides will respect the market and the rule of law, and do more to protect the order of the global financial market, safeguard investors' lawful rights and interests and promote the steady development of the world economy," the spokesperson added.