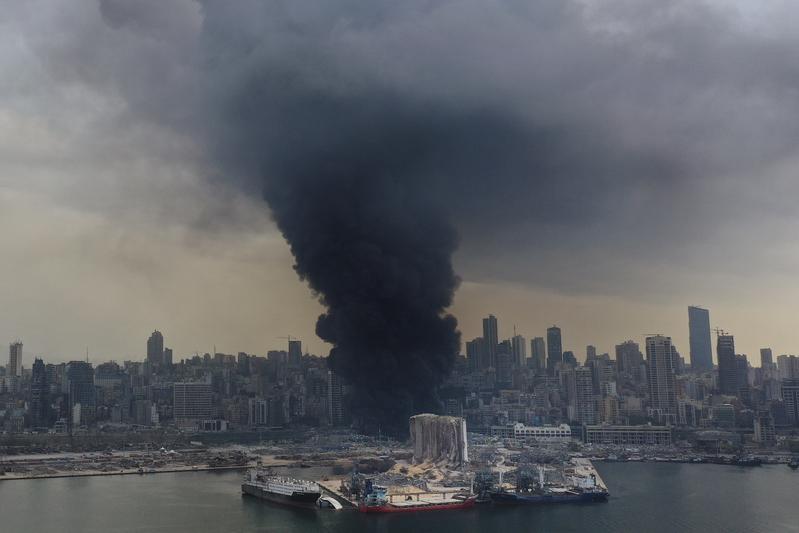 BEIRUT - Lebanese caretaker Prime Minister Hassan Diab revealed on Tuesday that the US Federal Bureau of Investigation (FBI) indicated in a report that Beirut's blasts were caused by 500 tons of ammonium nitrate, instead of 2,750 tons as stated in previous reports.

"Where have the 2,250 tons of ammonium nitrate gone?" Diab asked during a discussion held at the Grand Serail with reporters.

"Who is the owner of the ship that brought the nitrates, how did it enter Lebanon and who allowed it to enter Lebanon? Did security services know about it?" Diab kept asking.

Diab said that the Higher Defense Council held 20 sessions this year, and none of the security agencies informed him of the presence of the ammonium nitrate at the port, where two huge explosions on Aug 4 caused at least 200 deaths and around 6,000 injuries while leaving 300,000 homeless.

A team of FBI and French investigators participated in the initial investigations into the explosions, which the Lebanese authorities announced were caused by 2,750 tons of ammonium nitrate stored in one of the port's warehouses since 2013

ALSO READ: FBI says it has reached no conclusion on cause of Beirut blast

A team of FBI and French investigators participated in the initial investigations into the explosions, which the Lebanese authorities announced were caused by 2,750 tons of ammonium nitrate stored in one of the port's warehouses since 2013.

Diab noted that if there is an indictment against him in the case, it should be sent by the judicial investigator through the parliament, according to the constitution.

He said that he was first informed of the presence of TNT, which was highly explosive, then a report followed stating that chemical fertilizers were stored in the warehouse for about 7 years.

He assured that when he received a final report on July 22, he forwarded it to the relevant ministers to deal with the matter.

Fadi Sawan, the judicial investigator in the Beirut's port explosions, has formally charged Diab and former ministers Ali Hassan Khalil, Ghazi Zeaiter and Youssef Fenianos over negligence in the case.

Khalil and Zeaiter requested the dismissal of Sawan due to a breach of the constitution, claiming that they have a parliamentary immunity that requires the approval of parliament before taking any judicial action against them.

The Public Prosecutor's Office suspended on Dec 17 the investigations into the port's explosions pending a decision on the dismissal request.

Lebanese authorities have arrested 25 people related to the explosions after the investigations, including senior officials at the port and customs.