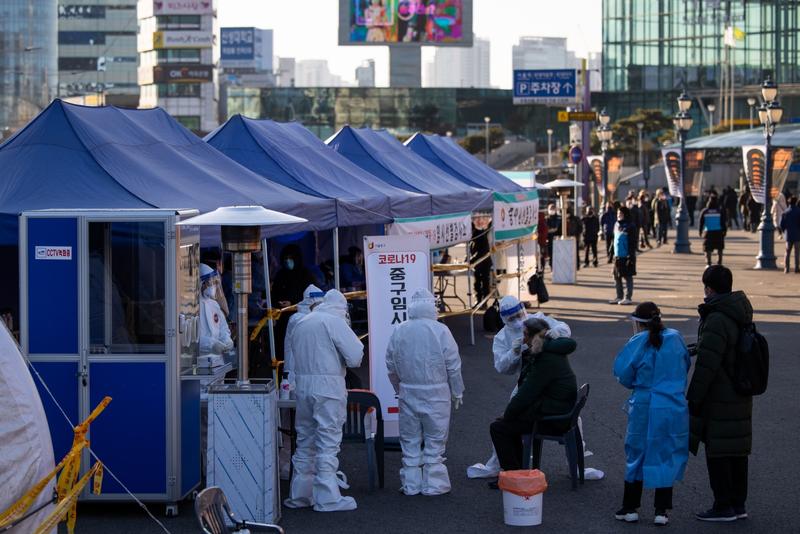 A medical worker wearing personal protective equipment collects a sample from a visitor at a temporary COVID-19 testing station outside Seoul Station in Seoul, South Korea, on Dec 14, 2020. (PHOTO / AFP)

Time after time this year, South Korea prevented the coronavirus from spreading uncontrollably, applying its elite testing-and-tracing practices that have become a global model for managing the pandemic without draconian, economy-sapping lockdowns.

Now, this “living with the virus” strategy -- as the nation of 51 million calls it -- is being tested like never before.

While case numbers are still small compared to the US and parts of Europe, Korea saw new infections top 1,000 for five consecutive days through Sunday, a staggering jump from an average of about 100 in previous months. The fierce winter wave has alarmed a country that’s drawn pride from being globally lauded for its COVID-19 response.

Korean health officials concede the latest outbreak has been particularly challenging to combat as small clusters of infections are more widespread and sprouting across the country. Prior surges were concentrated in a region or among specific groups such as churchgoers or young clubbers.

In an attempt to prevent a year-end surge, Prime Minister Chung Sye-kyun said Tuesday the country will shut down ski resorts and other tourist spots during the upcoming holiday season, and will restrict entrance to nursing-homes that are typically more vulnerable to virus infections.

The latest measures come a day after Seoul Metropolitan Government announced that it and its neighboring Gyeonggi Province and Incheon city will ban holiday parties with five or more people from Dec. 23 to Jan. 3. Weddings and funerals are exempt.

Health experts say South Korea has been hit with a perfect storm: a public tired of restrictions, a government wary of imposing more severe measures

The setback comes as other places that previously steered clear of lockdowns like Japan and Sweden also face persistent winter waves, suggesting the virus is testing more laissez-faire strategies that emphasized voluntary actions rather than top-down restrictions.

Korea and Japan, which doesn’t have the legal power to force a lockdown, have dropped out of the top five in Bloomberg’s COVID Resilience Ranking, which scores economies on their handling of the virus with the least social and economic disruption. In contrast, places that pursued heavier-handed strategies aimed at eliminating the virus like Australia, New Zealand and China are not seeing cases flare to the same degree.

“Perhaps there is overconfidence with the K-Quarantine,” said Kim Woo-joo, professor of infectious disease at Korea University’s Guro Hospital, referring to a term coined after the country’s K-Pop.

After extensive testing and tracing, Korea contained multiple surges including two major outbreaks in early spring in the southern city of Daegu and then over the summer in Seoul. Daily new cases were brought down to double digits after those outbreaks.

But as the weather began to cool, virus clusters started to emerge and spread -- many of them at restaurants, spas and fitness centers as more people withdrew indoors, where poor ventilation and close confinement can fuel transmission. 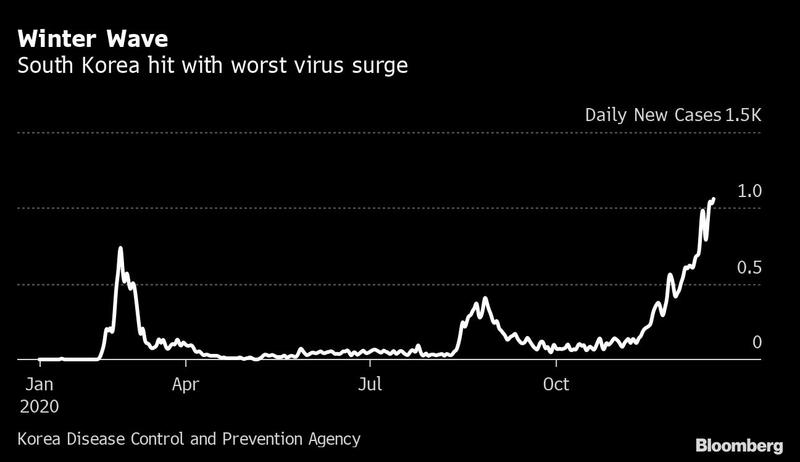 After extensive testing and tracing, Korea contained multiple surges including two major outbreaks in early spring in the southern city of Daegu and then over the summer in Seoul

As cases inched up, health authorities returned to their tried-and-true playbook. The government gradually raised the virus alert level, triggering stricter social-distancing measures, including limiting the number of people who can attend sporting events or group gatherings.

But this time, the gradual escalation isn’t having the same impact as before, said Ki Moran, an epidemiology professor at the Goyang-based National Cancer Center. South Koreans who diligently wore masks and refrained from dining out during earlier outbreaks seem to be no longer adhering strictly to the social-distancing rules.

“The virus is getting stronger in the winter while the public is getting less alert,” Ki said.

At the same time, the Korean government has been reluctant to move toward stricter restrictions because of the potential blow to the economy, said Jung Ki-suck, former head of Korea’s Center for Disease Control & Prevention who is now a professor at Hallym University Medical Center.

The KoreaTn government has been reluctant to move toward stricter restrictions because of the potential blow to the economy, said Jung Ki-suck, former head of Korea’s Center for Disease Control & Prevention

The economy has fared better than in other developed countries because of Korea’s strategy of managing the pandemic rather than pursuing virus elimination, as places such as China and New Zealand have done -- an approach that requires lockdowns.

“When South Korea eased social-distancing measures in the fall, the decision was made in consideration of the economy,” Jung said. “So when the virus started to spike, those who argued for containing the virus first and saving the economy later were not heard.”

Last week, senior health ministry official Yoon Tae-ho said in a briefing that while the criteria for raising the virus alert to the highest level was met -- reaching a weekly average of 800 or more new cases a day -- the government was still weighing the decision because the “social and economic impact would be too great.”

Raising the alert level to 3 could mean closing or restricting operations of as many as two million businesses, according to South Korean government officials.

Health authorities are instead focused on expanding testing: setting up nearly 200 temporary diagnosis centers and doubling the number of people tested to almost 50,000 a day. They’re also boosting the country’s army of contact tracing investigators.

On Monday, Prime Minister Chung said there were “positive signs” that the playbook may be working again. Based on tracking of mobile phone use, vehicle traffic and credit card transactions, there has been a noticeable fall-off in people moving about outdoors. The proportion of confirmed COVID-19 patients age 60 or older is also gradually decreasing, he said.

“The effectiveness of large-scale preemptive testing is being confirmed,” Chung said in a briefing Monday, when daily infections declined to 926, the first time they’ve dipped below 1,000 in a week.