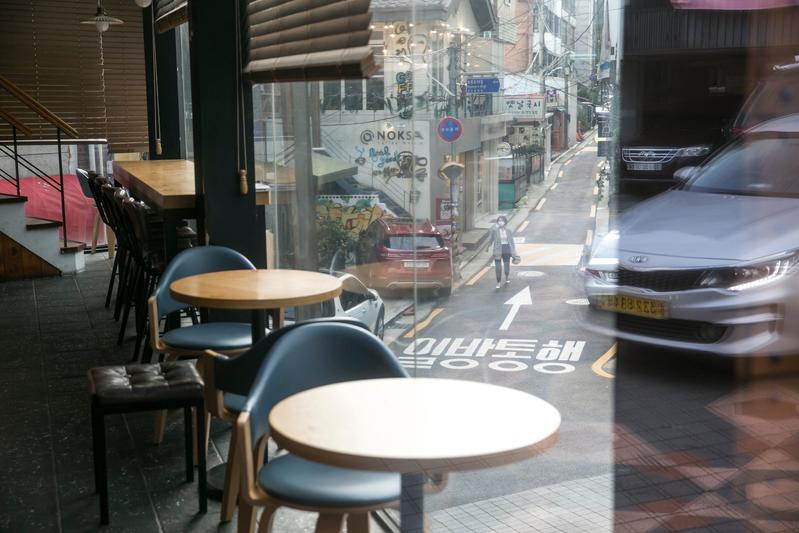 A pedestrian wearing a protective mask walks through the Itaewon district beyond the window of an empty cafe in Seoul, South Korea, on Aug 21, 2020. (PHOTO / BLOOMBERG)

DUBAI / SEOUL / SYDNEY - South Korea, which has been battling a new wave of the virus after seeing early success containing it, reported 397 new infections. That brings the country’s total to 17,399.

The authorities are considering raising social-distancing restrictions to the highest level as coronavirus cases spread beyond the Seoul Metropolitan area and Busan.

“Cases are rising in 17 cities and provinces across the nation, and we are now at the verge of a massive nationwide outbreak,” Jung Eun-kyeong, head of Korea Centers for Disease Control and Prevention, said at a briefing on Sunday.

Afghanistan on Sunday reported 46 newly confirmed COVID-19 cases after health authorities conducted 281 tests within a day, bringing the number of total cases to 37,999, the country's Ministry of Public Health said.

During the past 24 hours, 46 positive COVID-19 cases were recorded in eight provinces of Afghanistan's 34 provinces, the ministry said in a statement.

The new figures came after Victoria reported 182 new cases on Saturday, the second straight day of infections under 200.

Queensland state had two new virus cases the day after tightening restrictions due to an outbreak at a Brisbane youth detention center. Queensland’s case total stands at 1,105.

India's COVID-19 tally surpassed 3 million on Sunday, reaching 3,044,940, according to the latest data released by the federal health ministry.

The death toll due to the pandemic in the country also surged to 56,706.

According to the data, there are still 707,668 active cases across India, and 2,280,566 people have been successfully cured and discharged from hospitals.

Over the past few weeks, the Indian government has been focusing on ramping up the testing of COVID-19 samples.

According to the ministry, 2,302 more people were discharged from hospitals, bringing the total number of recovered patients to 107,500.

Iran's confirmed novel coronavirus cases rose to 356,792 on Saturday after an overnight registration of 2,028 new infections.

Sima Sadat Lari, spokeswoman for the Iran's Ministry of Health and Medical Education, said the pandemic has so far claimed 20,502 lives in Iran, up by 126 in the past 24 hours.

Besides, 307,702 have recovered and been discharged from hospitals while 3,850 remain in critical condition.

It also reported 70 fatalities during the day, raising the death toll to 6,353, while 2,947 more patients recovered in the day, bringing the total number of recoveries to 143,393.

Ghaiyb al-Omairi, a member of the parliamentary health committee, said in a press release that the infections with coronavirus could climb to 10,000 per day if the non-compliance with the health restrictions continued.

The number of coronavirus cases in Israel reached 101,933 on Saturday with 1,217 new infections, said the Ministry of Health.

The death toll rose to 819 after 10 new fatalities were added, while the number of patients in serious condition increased from 390 to 398, out of 824 patients currently hospitalized.

The Japanese capital reported 212 new cases, down from 256 cases on Saturday. Despite the drop, that marks four straight days of more than 200 cases in Tokyo. The city’s total number of cases now stands at 19,333. 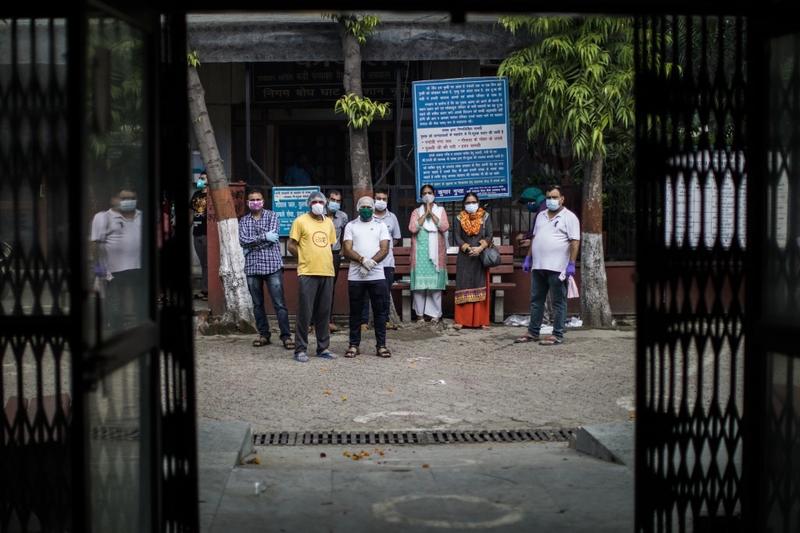 Relatives stand outside a furnaces facility during the cremation of their loved one who died from the COVID-19 coronavirus, at the Nigambodh Ghat cremation ground in New Delhi on August 22, 2020. (XAVIER GALIANA / AFP)

Jordan is considering imposing curfews over weekends starting next week as the number of coronavirus cases is rising fast, the government said Saturday.

Starting next Tuesday, all commercial facilities will have to shut down by 10 p.m. and citizens' movement is banned from 11 p.m. until 6 a.m., the minister added.

On Saturday, 44 new COVID-19 cases were registered in Jordan, raising the caseload to 1,576, Health Minister Saed Jaber said in a statement.

Kuwait reported 688 new COVID-19 cases and two more deaths, raising the tally of infections to 79,957 and the death toll to 513, the Health Ministry said in a statement.

The ministry also announced the recovery of 506 more patients, raising the total recoveries in the country to 71,770.

The republican headquarters on COVID-19 announced one more death and 341 recoveries, bringing the death toll in the country to 1,056 and the total recoveries to 36,397.

The Lebanese health ministry reported 611 new COVID-19 cases, raising the total number to 12,191 while the death toll went up by five to 121.

Over the past few days, Lebanese doctors have been warning against a scenario of uncontrollable spread of COVID-19 similar to what had happened in Italy.

Walid Mahmoud, director general of Irfan Hospital, said in that scenario hospitals would become full and doctors have to remove ventilators from the old to save young people.

"We will also have to choose who will be admitted to hospitals which cannot receive all patients at once," Mahmoud said.

The total number of COVID-19 cases in Myanmar has increased to 444, with two more locally transmitted cases and one imported case reported on Sunday morning, according to a release from the Ministry of Health and Sports.

According to the release, all patients were under quarantine as two of them had travelling history to Sittwe township of Rakhine state in the past 14 days while the other one is a returnee from India. 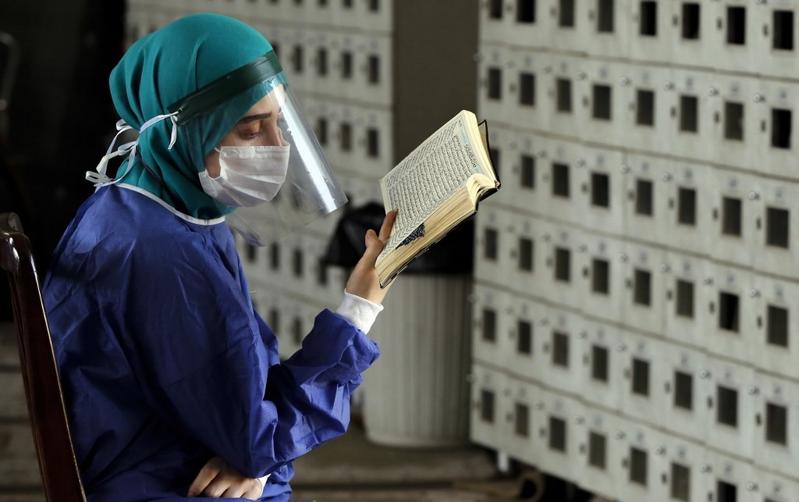 An Iranian health worker reads the Koran on Arafat day at the Tehran University Campus mosque, on July 30, 2020.(PHOTO / AFP)

New Zealand reported three new COVID-19 infections, a day before the government reviews its stance on the lockdown in the city of Auckland. Prime Minister Jacinda Ardern said this week that authorities will “stay the course” on the current strategy, and will consider information from the weekend in the next review.

Two of the new cases were imported, the health ministry said. New Zealand’s case total is now 1,324, as the country fights to quell a new outbreak following months of success containing the virus.

The Palestinian minister of health reported 311 new COVID-19 cases, taking the tally of infections in the Palestinian territories to 24,709, including 15,338 recoveries and 140 deaths.

Singapore's Ministry of Health (MOH) reported 50 new COVID-19 cases on Saturday, bringing the total confirmed cases in the country to 56,266.

Of the new cases, five are imported cases, two are community cases and the rest are linked with the dormitories of foreign workers.

Meanwhile, 315 more recovered from the virus, bringing the total recoveries to 113,531, while the death toll remained at 193, according to a ministry statement quoted by QNA.

The decision was based on the health reports of the kingdom's cities and governorates, the ministry said, adding employees must follow anti-coronavirus precautions during their working hours. 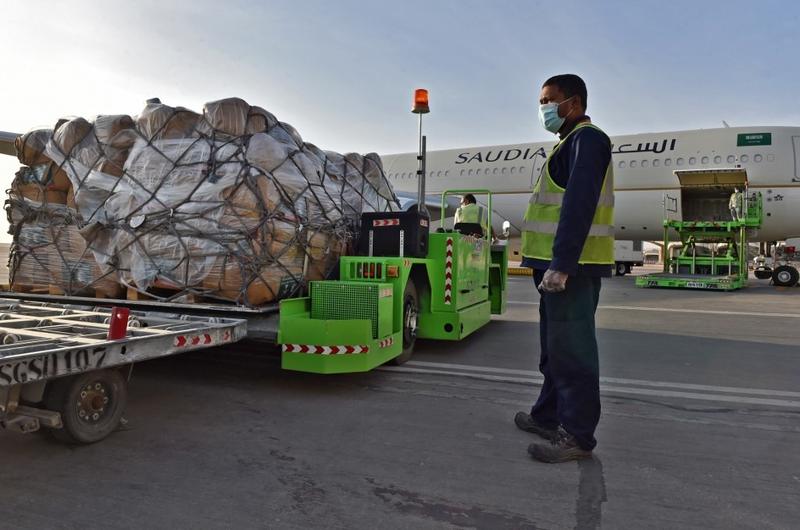 Saudis organise medical aid to be loaded into a plane as Saudi Arabia begins sending field hospitals and medical aid to Lebanon from the King Khalid International Airport in Riyadh, on August 7, 2020. (FAYEZ NURELDINE / AFP)

The number of confirmed COVID-19 cases in the Philippines surged to 189,601 after the Department of Health (DOH) reported 2,378 new daily cases on Sunday.

The DOH said that the number of recoveries surged to 131,367 after it reported 16,459 more patients have survived the disease.

The death toll also climbed to 2,998 after 32 more patients have succumbed to the viral disease, the DOH added.

The death toll from the virus in the country increased to 6,102 after 22 new fatalities were added in the past 24 hours, Koca said, adding the total recoveries rose to 236,370.

The Qatari health ministry announced 284 new COVID-19 infections, raising the total number of confirmed cases in the Gulf state to 116,765.

Meanwhile, 315 more recovered from the virus, bringing the total recoveries to 113,531, while the death toll remained at 193.

In addition, 112 more patients have recovered from the virus, taking the tally of recoveries in the UAE to 58,408. The UAE also confirmed two more deaths, pushing up the country's death toll to 372.

Vietnam’s health ministry said late Saturday that the country had 5 more local cases and one death -- a 93-year-old man -- all in the coastal hotspot of Danang. Cases in the Southeast Asian country, once a model of containment in the region, now total 1,014. There have been 26 deaths.