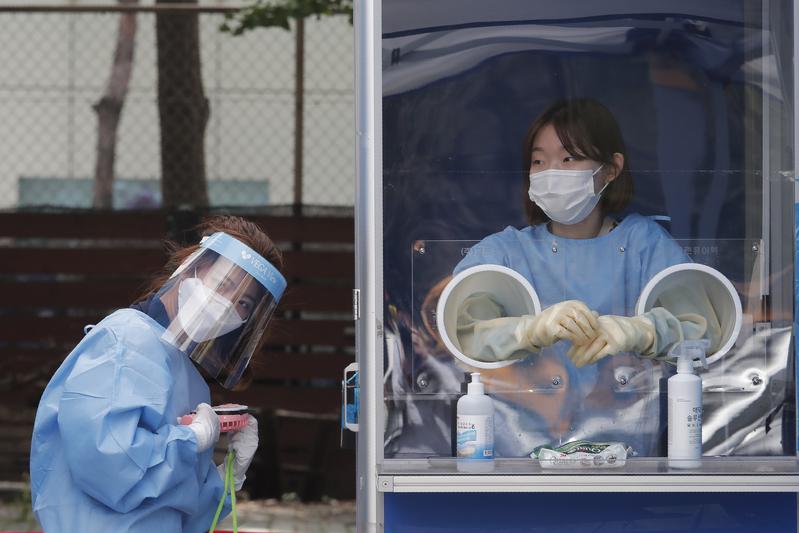 A medical worker holds a portable fan during a sweltering heat as police officers are tested for COVID-19 at a makeshift clinic at the Seoul Metropolitan Police Agency in Seoul, South Korea, Aug 19, 2020. (AHN YOUNG-JOON / AP)

SYDNEY / BEIRUT/ TEL AVIV / WELLINGTON / YANGON / SEOUL / ANKARA / MUMBAI / JAKARTA / MANILA - South Korea said on Saturday it will roll out tougher social distancing guidelines to curb the spread of coronavirus nationwide as it battles a new outbreak of the disease spreading from the capital, Seoul.

The Korea Centers for Disease Control and Prevention (KCDC) reported 315 new domestic coronavirus infections as of midnight Friday, the latest in a string of triple digit increases in new local cases.

South Korea used advanced contact tracing and widespread testing to contain its first outbreak of the novel coronavirus, but Asia’s fourth-largest economy has experienced persistent outbreaks in recent weeks, mostly in and around densely populated Seoul and the surrounding areas.

The same guidelines will be imposed on other areas across the country effective Sunday. However, in some areas with fewer infections, the guidelines would be recommended rather than obligatory.

Kwon said South Korea has provided anti-viral drug remdesivir to treat 143 patients at 35 hospitals, but access to the drug has been irregular due to issues on the supplier side.

Australia’s second most populous state, Victoria, reported 13 new coronavirus deaths in the 24 hours to Saturday morning, authorities said, while new infections in the hotspot state remained below 200 for the second consecutive day.

Other than in Victoria, which accounts for over 80 percent of the country’s COVID-19 deaths due to a second wave of infections, Australia has large avoided the high casualty numbers of many nations with just under 24,500 infections and 485 deaths.

The state, home to about one in four Australians, had reported 179 new cases and nine deaths a day earlier, down from over 700 a day two weeks ago.

Almost mid-way through a six-week lockdown imposed in early August, Victorian premier Daniel Andrews said he was hopeful the toughened restrictions were working.

Meanwhile, the north eastern state of Queensland introduced an immediate 10-people cap to all gatherings in Brisbane, its capital, after a small outbreak was found at a youth detention centre, Premier Annastacia Palaszczuk said.

India reported a record daily jump of coronavirus infections on Saturday, bringing the total near 3 million and piling pressure on authorities to curb huge gatherings as a major religious festival began.

For most of western India, especially the financial capital Mumbai, the 11-day festival of Hindu elephant-headed god Ganesh is usually celebrated with big public gatherings.

Cases have plateaued in Mumbai, which now averages just above 1,000 a day and has recorded more than 134,000 in total. But strict pandemic regulations have meant the festival season, which begins this month, has been lacklustre.

According to the ministry, 2,207 more people were discharged from hospitals, bringing the total number of recovered patients to 105,198.

Israel officially reached a tally of more than 100,000 coronavirus cases on Friday as the government struggled to contain a resurgence in infection rates.

In May, Israel lifted a nationwide lockdown that had flattened an infection curve, which Prime Minister Benjamin Netanyahu and other officials celebrated as a success. Daily cases that numbered in the hundreds dropped to low double digits.

Netanyahu’s government has come under fire by Israelis who have taken to the streets in near-daily demonstrations to demand better economic aid.

An August 5 poll from the Israel Democracy Institute found that only 25 percent of Israelis approve of Netanyahu’s handling of the pandemic, while some 58 percent identify with the protests against the government’s economic policies.

Lebanon imposed a partial lockdown for two weeks starting on Friday in an effort to counter COVID-19 infections which have doubled since the catastrophic explosion at the Beirut port.

The spread of COVID-19 is compounding the woes of a country still reeling from the Aug 4 blast that killed at least 179 people and wounded 6,000, and a financial meltdown that has devastated the economy.

Lebanon recorded its highest number of new daily infections on Friday, with 628 new cases and three deaths. The infections have spread since the blast as hospitals were flooded with the casualties, medics say.

Iman Shankiti, the World Health Organization representative in Lebanon, said the country was at a dangerous juncture.

The shutdown, which includes a curfew from 6pm to 6am, allows for clearing rubble, making repairs and giving out aid in neighbourhoods demolished by the explosion. The airport will remain open, with travellers having to take a PCR test before boarding and on arrival.

In the hour following the curfew on Friday, shops were closed and police were seen ushering pedestrians along the seaside corniche. A security source said compliance was good in the Beirut area though less so in northern Lebanon.

Myanmar reported 16 more locally transmitted COVID-19 cases Saturday morning, bringing the number of infections to 435 in total, according to a release from the Ministry of Health and Sports.

According to the release, the newly confirmed cases are from Sittwe township of Rakhine state who were under quarantine due to the close contact with recently confirmed patients.

So far, a total of 45 local transmission cases were reported in Rakhine state since Aug 16, the ministry's figures said.

The government announced a two-month curfew order effective from 09:00 pm to 04:00 am local time in Sittwe township starting Friday due to the recent increasing number of locally transmitted cases.

The stay-at-home order was also imposed in the township late Thursday.

There were six new confirmed cases of COVID-19 in New Zealand on Saturday, the Ministry of Health announced in a statement.

According to the ministry, all six new cases were identified as community transmission. Four were epidemiologically linked to an existent cluster in Auckland, with two being household contacts and two being church contacts. The other two cases reported on Saturday were still under investigation.

The six new cases reported on Saturday brought the total number of confirmed cases of COVID-19 to 1,321, which was the number New Zealand reported to the World Health Organization, said the ministry.

The total number of active cases in New Zealand was currently 111. Sixteen of the active cases were imported cases from managed isolation facilities.

Nine people with COVID-19 were being treated in hospital, six of whom were in stable conditions while three people were in ICU, it is stated.

The number of confirmed COVID-19 cases in the Philippines soared to 187,249 after the Department of Health (DOH) reported 4,933 new daily cases on Saturday.

The DOH said that the number of recoveries surged to 114,921 after 436 more patients have survived the disease.

The death toll also climbed to 2,966 after 26 more patients have succumbed to the viral disease, the DOH added.