South Korea at 'critical juncture' in fight against COVID-19 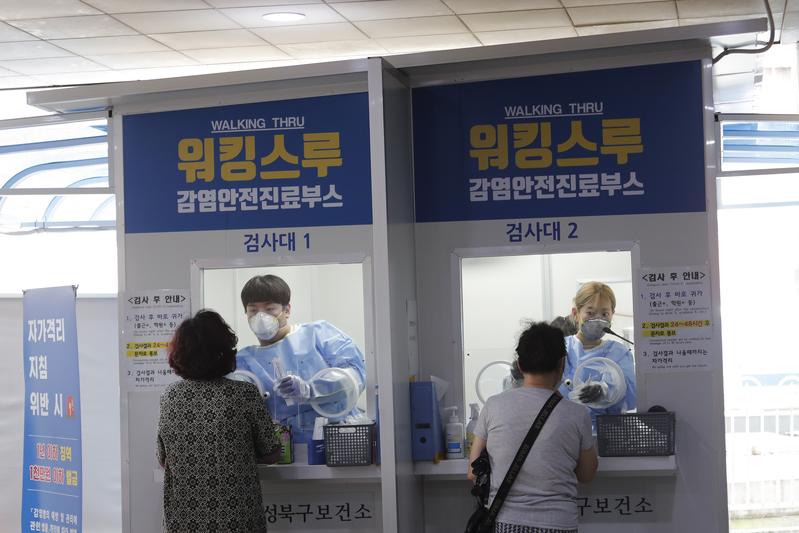 South Korea has seen a fresh wave of COVID-19 infections, sparking alarm among health experts and prompting calls for further tightening of social distancing and other anti-virus measures in the country.

With triple-digit new cases recorded daily over the past week, the nation’s vice health minister, Kim Gang-lip, said on Aug 18 that South Korea is at a critical moment in the fight against the novel coronavirus.

Some new anti-pandemic rules, which include a ban on in-person worship services at churches in the greater Seoul area, have already been announced and more could be on the way if the virus cases continue to spike.

On Aug 20, South Korea reported 288 fresh COVID-19 cases, including 276 local infections, bringing the nation's total tally to 16,346, according to the Korea Centers for Disease Control and Prevention. It marked the seventh straight day with more than 100 cases.

On Aug 19, South Korea had reported 297 new COVID-19 cases, including 283 local infections. The number of new cases added that day was the highest since early March.

The surge was in sharp contrast with the previous situation when daily new cases stayed in the 20-40 range in early August.

On Aug 16, authorities raised the level of social distancing in Seoul and the surrounding Gyeonggi Province, on a three-level sliding scale, from Level 1 to Level 2 for two weeks. Under the Level 2 guidelines, gatherings of 50 or more people indoors and 100 or more people outdoors are prohibited.

Stricter rules were announced on Aug 18, including banning in-person activities at all religious facilities, and adding Incheon, a port city just west of Seoul, to the list of areas that need to follow tightened social distancing rules.

The resurgence in COVID was somewhat expected, because at the end of July and in August most South Koreans had vacations, which means “a lot of movement within the country”, said Kim Woo-joo, a professor of infectious disease at the Korea University Guro Hospital.

He noted the government had been encouraging people to travel and eat at restaurants by offering incentives. The move was aimed at boosting consumption and shoring up the economy, but it had a negative side-effect in terms of reducing the anti-COVID vigilance, Kim said.

The South Korean government designated Aug 17 as a temporary national holiday, which, according to estimates by Seoul-based think tank Hyundai Research Institute, could bring about US$3.5 billion worth of economic effects, Yonhap reported.

Fresh outbreak in churches has again emerged as a major concern.

After a member of Sarang Jeil Church in northern Seoul first tested positive on Aug 12, a total of 457 COVID-19 cases in relation to the church had been reported as of Aug 18, according to health authorities. The church became the source of South Korea’s second-biggest infection cluster after Shincheonji, where over 5,000 cases were identified earlier.

Noting that the government had in late July lifted a ban on small meetings in churches, Kim warned that church gatherings can be quite risky as the people often socialize after congregating, talking with each other for many hours and even eating together.

“We are very worried about the … (new) COVID-19 cases, especially serious cases and critical cases among the elderly and persons with medical conditions,” said Kim. “That will be another contributing factor to the mortality caused by COVID-19.”

Concerned about the recent spike, Jerome Kim, director-general of the International Vaccine Institute (IVI) in Seoul, said it is heartening that the South Korean government is taking the situation very seriously.

On Aug 16, South Korean President Moon Jae-in called for nationwide efforts to curb the spread of the virus

IVI is a nonprofit inter-governmental organization established in 1997 at the initiative of the United Nations Development Programme.

“As part of the understanding and as a part of the commitment of the government to controlling COVID-19 while at the same time trying to bring the economy back to as high level as possible, they were going to have to accept a certain level of infections,” IVI’s Kim said.

On Aug 16, South Korean President Moon Jae-in called for nationwide efforts to curb the spread of the virus.

Controlling COVID-19 cannot be done by the government alone, said IVI’s Kim, pointing out that the general public needs to play its part in supporting the anti-pandemic effort, including wearing masks always and making changes in daily behavior.

In countries like China, Australia and New Zealand, where virus control is relatively successful, there has been cooperation with government actions, the IVI official noted. “What the outbreak teaches us is that the virus always finds the weakest point,” he said, pointing to a similar resurgence in Australia’s Victoria state.

As many anti-virus safeguards in South Korea are still deemed voluntary, Kim from Korea University Guro Hospital said he hopes to see a more strict approach, and that authorities will shift from a recommendation style to prohibition. This includes banning gatherings in high-risk congregated settings.

“The transmissibility of COVID-19 is very high. Even if a patient does not show any symptoms, he or she can still transmit the virus to other people, so we need more strict measures,” said Kim Woo-joo.

Kim Gang-lip, the vice health minister, said at a regular press briefing on Aug 18 that “this week will be critical juncture for the country’s virus fight”, Yonhap reported.

Kwon Jun-wook, deputy chief at the Central Disease Control Headquarters, said they are open to raising the social distancing program to Level 3 if the situation gets worse.

According to the plan, Level 3 will be applied if there is a large-scale outbreak far exceeding 100. When implemented, all gatherings of 10 people or more will be banned and all schools will be required to shift to online classes or shut down completely.