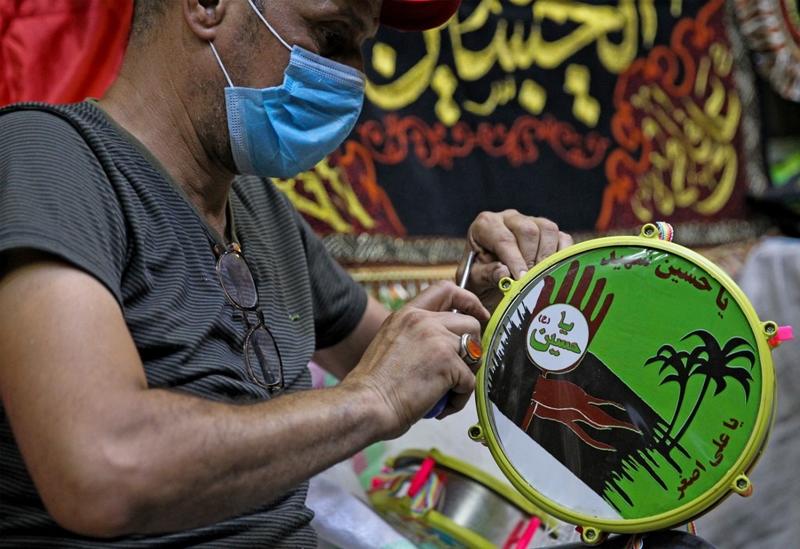 A mask-clad Iraqi vendor decorates a tambourine as Shiite Muslims prepare to commemorate Ashura amid the COVID-19 pandemic in the capital Baghdad's eastern Sadr City on Aug 20, 2020. (AHMAD AL-RUBAYE / AFP)

The ministry reported 87 fatalities during the day, raising the death toll to 6,208, while 2,831 more patients recovered in the day, bringing the total number of recoveries to 137,200.

The new cases were recorded after 23,268 testing kits were used across the country during the day, and a total of 1,368,727 tests have been carried out since the outbreak of the disease, according to the ministry's statement.

Meanwhile, Iraqi Health Minister Hassan Al-Tamimi said in a press release that Iraq will be one of the first countries to receive the vaccine if approved by the World Health Organization (WHO) and other international organizations.

Several major Australian businesses urged a swift reopening of state borders on Thursday, even as authorities warned against complacency as new cases of the virus appear to be trending lower.

Australian Prime Minister Scott Morrison has walked back his suggestion that a COVID-19 vaccine could be made mandatory.

The comments came after his government signed a letter of intent with British-based drug company AstraZeneca to produce a promising candidate vaccine developed by University of Oxford locally if trials prove successful.

Victoria state on Thursday reported a small daily increase in new infections with 240 cases over the past 24 hours. The figures will buoy optimism that a hard lockdown of the state capital Melbourne is containing the spread of the new coronavirus, which had threatened to spill across the rest of the country.

Australia has recorded just over 24,000 COVID-19 infections, while the death toll rose to 462 after 12 people in Victoria died from the virus.

According to the figure reported by the country's Directorate General of Health Services (DGHS) under the Ministry of Health and Family Welfare, the number of confirmed infections in the country totaled 287,959 while fatalities stood at 3,822.

"Forty-one more people died in the last 24 hours," it said in a statement.

The official data showed that 14,059 samples were tested in the last 24 hours across Bangladesh. The total number of recovered patients in the country stood at 168,991 including 3,253 new recoveries. 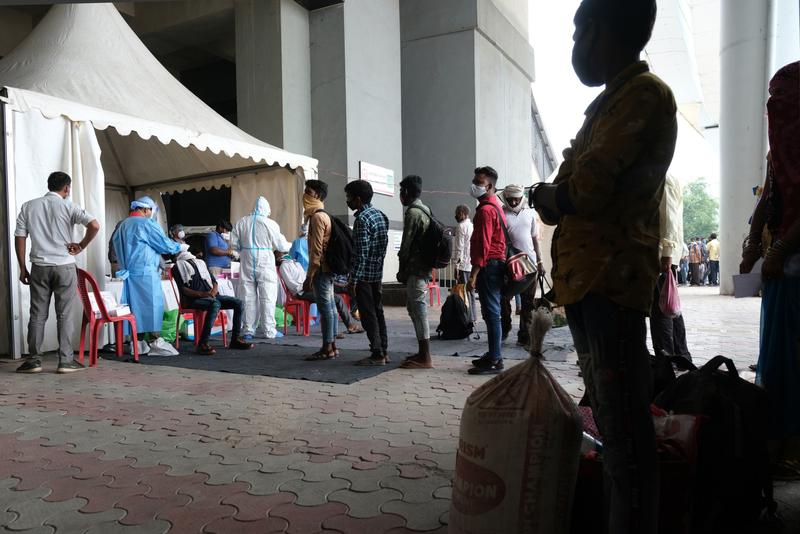 Migrant workers arriving from neighboring states line up as they wait to undergo Covid-19 rapid antigen testing at a temporary facility set up at the Anand Vihar inter-state bus terminal in New Delhi, India, on Aug 18, 2020. (PHOTO / BLOOMBERG)

Nearly 30 percent of residents in India’s capital New Delhi have had the coronavirus, according to a seroprevalence study of more than 15,000 people conducted by the state health authorities.

The prevalence of COVID-19 antibodies has increased to 29.1 percent in the first week of August from the 23.48 percent found in the first survey held between June 27 and July 10.

About 32.2 percent of women in the capital showed seroprevalence compared to 28.3 percent among men. The tests help identify the presence of antibodies in the general population.

India reported a record daily jump of 69,652 coronavirus infections on Thursday, data from the federal health ministry showed. Deaths rose by 977 to a total of 53,866.

India is the worst-hit country in Asia and globally third only behind the United States and Brazil in number of cases.

Indonesia reported 2,266 new coronavirus infections on Thursday, bringing the total number of cases in the Southeast Asian country to 147,211.

Data from the health ministry showed an additional 72 deaths, taking total fatalities to 6,418.

Spokeswoman for Iran's Ministry of Health and Medical Education Sima Sadat Lari that over the past 24 hours, 2,444 new patients were diagnosed, taking the total confirmed novel coronavirus cases in the country to 350,279.

By now, Sadat Lari added that 302,528 cases have recovered and 3,868 remain in critical condition in Iranian hospitals' ICUs.

The Tokyo metropolitan government on Thursday reported 339 new COVID-19 cases, with daily infections in the capital topping 300 for the first time since Saturday.

The number of patients in hospital designated as being in a "serious condition" rose from 32 to 36, the metropolitan government said the previous day.

This marks the third time the number of seriously ill COVID-19 patients in the capital of 14 million has topped the 30-mark since May amid concerns over the the virus' contagiousness in urban areas.

Kuwait reported 675 new COVID-19 cases and two more deaths, raising the tally of infections to 78,145 and the death toll to 507, the Health Ministry said in a statement.

The ministry also announced the recovery of 528 more patients, raising the total recoveries in the country to 69,771.

Lebanon's number of COVID-19 infections increased by 589 cases to 10,347, while death toll went up by two to 109, the Health Ministry reported.

Iman al-Shankiti, World Health Organization (WHO) representative in Lebanon, warned on Wednesday that the COVID-19 situation in Lebanon is very "dangerous" as the country reported the hightest daily increase.

Head of Lebanese Order of Physicians Charaf Abou Charaf urged donor countries to help in equipping public hospitals and send field hospitals to Lebanon to treat COVID-19 patients since the current medical establishments are not enough.

The Myanmar government imposed a stay-at-home order in Sittwe township of Rakhine state starting from Thursday night due to the recent increasing COVID-19 local transmissions, according to a release from the Health and Sports Ministry.

Three more locally transmitted cases were reported in Sittwe township of Rakhine state on Thursday night, bringing the total number of infections to 399 in the country, the ministry's release said.

So far, nine local transmission cases have been reported in Sittwe township since Aug. 16, the ministry's figures showed.

COVID-19 was first detected in Myanmar on March 23 and six deaths have been reported so far.

Tourism-dependent Mauritius envisages reopening its borders from the end of next month, Le Defi Quotidien reported, citing an unidentified official.

The process will be phased with priority given to visitors from countries considered safe with regard to the pandemic. Ahead of the reopening, a laboratory will be set up at the airport to increase testing capacity, the Port Louis-based daily said.

Myanmar reported two more locally transmitted cases of COVID-19 on Thursday morning, bringing the total number of infections in the country to 396, said a release from the Health and Sports Ministry.

New Zealand on Thursday reported five new confirmed cases of coronavirus in the last 24 hours compared with six a day earlier, as the Pacific nation battles a fresh outbreak in its biggest city of Auckland.

An abrupt resurgence of infections last week in Auckland prompted the government to reimpose some lockdown restrictions on the city’s 1.7 million residents.

New Zealand so far has reported just over 1,300 confirmed cases and 22 deaths from the virus. There are 101 active cases in the country.

A woman crosses a deserted street in Melbourne's central business district on August 19, 2020, as the city battles an outbreak of the COVID-19 coronavirus. （WILLIAM WEST / AFP）

The Qatari health ministry announced 295 new COVID-19 infections, raising the total number of confirmed cases in the Gulf state to 115,956.

Meanwhile, 303 more recovered from the virus, bringing the total recoveries to 112,658, while the death toll remained at 193.

Singapore's Ministry of Health (MOH) reported 68 new COVID-19 cases on Thursday, bringing the total confirmed cases in the country to 56,099.

Of the new cases, two are imported and the rest are linked with the dormitories of foreign workers. 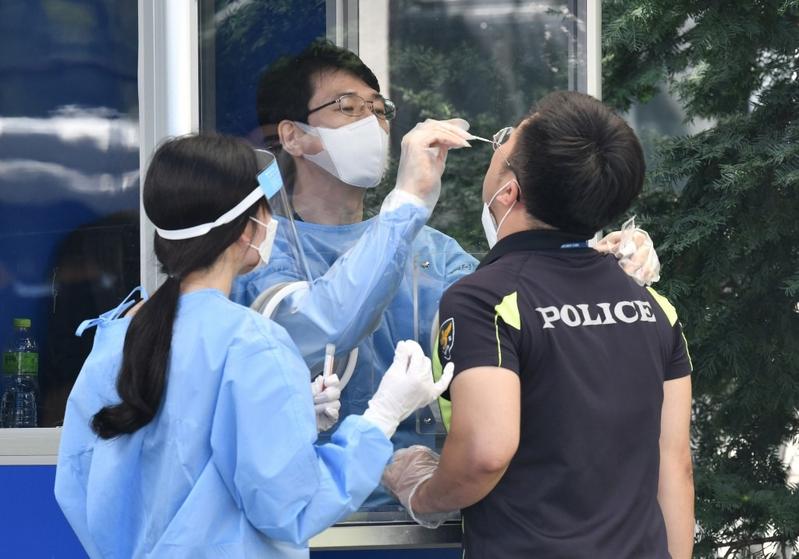 A medical worker in a booth takes test samples for the COVID-19 coronavirus from a South Korean police officer at Seoul Metropolitan Police Agency's maneuver headquarters in Seoul on August 19, 2020. (PHOTO / AFP)

South Korea’s coronavirus infections are back “in full swing” and spreading nationwide after members of a church attended a political demonstration, authorities said on Thursday, threatening one of the world’s COVID-19 success stories.

The Korea Centers for Disease Control and Prevention (KCDC) reported 288 new cases as of midnight on Wednesday, marking a week of triple-digit daily increases, although down slightly from the previous day’s 297.

“This is a grave situation that could possibly lead to a nationwide pandemic,” Vice Health Minister Kim Gang-lip told a briefing.

Without aggressive contact tracing, the country could experience the types of spikes and continued infections witnessed in the United States and Europe, said KCDC deputy director Kwon Jun-wook.

“Consider the COVID-19 pandemic now to be in full-swing.”

The latest outbreak is driven by hundreds of infections among members of a church run by a far-right preacher. They had attended an anti-government protest in Seoul on Aug 15, the 75th anniversary of the Japan’s World War Two surrender and the end of colonial rule.

The total recoveries in the kingdom rose to 274,091 with the addition of 1,180 recoveries, while the death toll surged to 3,506 with 36 new fatalities recorded in the last 24 hours.

Thailand reported seven new coronavirus cases, all found in state quarantine, continuing the nation’s almost three-month streak of zero local infections. The government is conducting contact tracing after it was found a woman who had completed 14-day quarantine could have the virus.

The number of confirmed COVID-19 cases in the Philippines surged to 178,022 after the Department of Health (DOH) reported 4,339 new daily cases on Thursday.

The DOH said that the number of recoveries rose to 114,114 after it reported 727 more patients have survived the disease.

The death toll in the Philippines also increased to 2,883 after 88 more patients have succumbed to the viral disease, the DOH added.

The Philippines' capital Metro Manila topped the regions with the highest number of daily confirmed cases reported on Thursday with 2,590.

Meanwhile, 23 more deaths were recorded in the past 24 hours, taking the death toll to 6,039, while the total recoveries in Turkey rose to 233,915, Koca tweeted.

"Our number of cases has been on the rise for a while. We reached the highest number of patients of the last 1.5 months," the minister said in a press conference.

He noted that people, who do not have chronic illnesses, rest in isolation, and apply the treatment at home. The healthcare teams contact these people on the first, third, seventh, and fourteenth days after they are diagnosed, Koca added.

UAE also reported 113 more patients who have recovered from the virus, taking the tally of recoveries in the country to 58,022, and confirmed one more death, pushing the country's death toll to 367.

Authorities locked down E Hospital in Hanoi after an 87-year-old patient tested positive for the coronavirus, Voice of Vietnam reported, citing the head of the health ministry’s administration of medical examination and treatment.

The patient was found to have contracted the virus six days after being admitted into the hospital. The source of the patient’s infection hasn’t been detected. Vietnam has 994 confirmed cases and 25 deaths.