US 'set to sanction Turkey over Russian defense system' 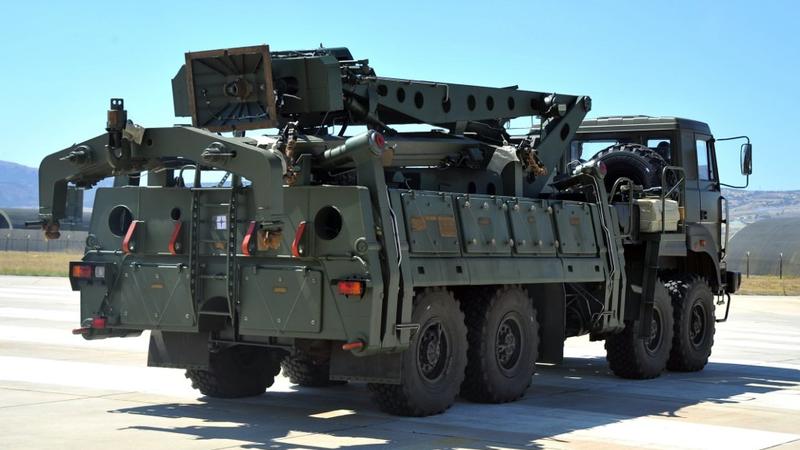 This handout picture taken and released on Aug 27, 2019 by the Turkish Defence Ministry shows a part of the S-400 missile defense system after it was unloaded from a Russian cargo plane, at the Murted military airbase, northwest of Ankara. (PHOTO HANDOUT / TURKISH DEFENCE MINISTRY / AFP)

WASHINGTON - The United States is poised to impose sanctions on Turkey over its acquisition last year of Russian S-400 air defense systems, five sources including three US officials told Reuters on Thursday, a move likely to worsen already problematic ties between the two NATO allies.

The long-anticipated step, which is likely to infuriate Ankara and weigh on Turkey’s relations with the incoming administration of President-elect Joe Biden, is expected to be announced as early as Friday, sources have said.

The long-anticipated step, which is likely to infuriate Ankara and weigh on Turkey’s relations with the incoming administration of President-elect Joe Biden, is expected to be announced as early as Friday, sources have said

The sanctions would target Turkey’s Presidency of Defence Industries and its head, Ismail Demir, sources have said. They would be damaging but narrower than the severe scenarios some analysts have outlined.

ALSO READ: Turkey does not expect sanctions over Russian S-400s under Biden

Two sources familiar with the matter, including a US official speaking on the condition of anonymity, said President Donald Trump had given aides the blessing for the sanctions.

The Turkish lira weakened as much as 1.4 percent following the news. US sanctions could harm a Turkish economy struggling with a coronavirus-induced slowdown, double-digit inflation and badly depleted foreign reserves.

A senior Turkish official said sanctions would backfire and hurt ties between the two NATO members.

“Sanctions would not achieve a result but be counter-productive. They would harm relations,” the official said. “Turkey is in favor of solving these problems with diplomacy and negotiations. We won’t accept one-sided impositions,” he said.

The decision will have repercussions far beyond Turkey, sending a message to US partners around the world that might consider buying Russian military equipment and have been warned repeatedly about US sanctions.

Turkey’s leader, President Tayyip Erdogan, had hoped to prove US threats hollow, betting the relationship he developed with Trump would insulate Ankara from punitive US action.

Having forged a working relationship with Erdogan, Trump long opposed US sanctions against Turkey despite the advice of advisers. Officials in his administration internally recommended sanctions against Ankara in July 2019, when the Turkish government started taking delivery of the S-400s, sources familiar with the matter told Reuters.

But sanctions appeared likely even if Trump did not act, the sources said.

The final version of the US$740 billion annual US defense authorization legislation, which the Senate is expected to vote on as early as this week, would force Washington to impose sanctions within 30 days.

One of the US officials said one of the reasons Trump was finally willing to move ahead with Turkey sanctions was to “decouple” the issue from NDAA bill, which carries a provision that would require him to impose measures on Ankara. This way, Trump can avoid looking like his hand is being forced, the official said.

Kicked Out Of F-35 Program

Still, the increasing US pressure is not without risk. Washington does not want to push Erdogan even closer to Russian President Vladimir Putin, whose goal is to weaken and divide the NATO alliance.

Russia delivered the ground-to-air S-400s last year and Turkey tested them as recently as October. Ankara said they would not be integrated into NATO systems and pose no threat, and has called for a joint working group on the issue.

But the United States maintained that the S-400 does pose a threat, and announced last year it was removing Turkey from the F-35 fighter jet program over Ankara’s decision.

Lockheed Martin’s F-35 stealth fighter jet is the most advanced aircraft in the US arsenal and is used by NATO members and other US allies.

The US State Department could still change plans and widen or narrow the scope of planned sanctions against Turkey.

However, sources said the announcement of the sanctions in their current form was imminent.