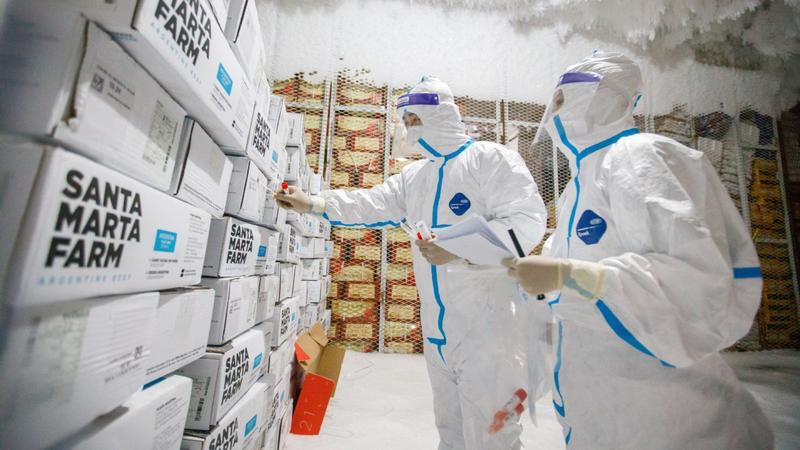 The novel coronavirus may have been lurking in different places across the world long before it caused COVID-19 outbreaks, although efforts are underway to try to find its origin, said a top public health expert.

Meanwhile, the possibility is increasing that the novel coronavirus, or SARS-CoV-2, was imported via contaminated cold-chain food products and resulted in the initial outbreaks in Wuhan, Hubei province, in December of last year based on recent studies, Gao Fu, director-general of the Chinese Center for Disease Control and Prevention, said in an exclusive interview with China Daily.

"Of course, all the possibilities need further scientific evidence to be proven," he said.

Although it is generally believed that SARS-CoV-2 was transmitted to humans via an intermediate host mammal, scientists have made little progress in determining the host despite great efforts, he said. A thorough, worldwide investigation should be a priority, he added.

The latest findings might have shown that the virus had existed in some other parts of the world long before the outbreak.

Gao Fu, director-general of the Chinese Center for Disease Control and Prevention

"Back in early January, my colleagues and I conducted a thorough search of Huanan Seafood Market in Wuhan in the hope of identifying the host but found no clues," Gao said. "Investigations by the China CDC have been searching for the answer since then, but without results."

The wholesale food market is where certain types of wildlife and aquatic products were sold. It was closed on Jan 1 after initial reports of COVID-19 cases, then known as a "pneumonia of unknown cause" were linked with the market.

"The fact that the virus was first identified in Wuhan does not equate with the city being the origin of the virus," Gao said. "The latest findings might have shown that the virus had existed in some other parts of the world long before the outbreak."

The novel coronavirus infected people in the United States in mid-December of last year, a month before the first COVID-19 case was identified in the country, according to a study by the US Centers for Disease Control and Prevention that was published in the journal Clinical Infectious Diseases on Nov 30.

Researchers from the centers analyzed 7,389 samples from blood donations collected from residents of nine US states as early as mid-December and found evidence of infection in 106.

In Italy, after identifying antibodies to the virus in volunteers participating in a lung cancer screening trial, researchers have found that the coronavirus may have existed in the country since September of last year, months before the report of the first COVID-19 case in the country in February.

"We are still far from clear why the virus caused outbreaks in Wuhan, and why the outbreaks started in December," Gao said, adding it is very likely that the novel coronavirus had undergone an important mutation so its infectivity to humans was significantly increased.

Following the recent scattered outbreaks in China, including those in Beijing in June－which were linked to a wholesale food market where cutting boards for imported salmon tested positive for the virus－and in the port city of Qingdao, Shandong province, in October, Chinese researchers proved that the virus can be transmitted to humans via contaminated cold-chain food products.

In research published in the China CDC Weekly in October, researchers from the China CDC confirmed that the outbreak in Qingdao in October was caused by packaging of imported fish contaminated with the virus. Scientists isolated live novel coronavirus from a package while tracing the COVID-19 outbreak.

Wu Zunyou, chief epidemiologist at the China CDC, said earlier that since it is very possible that several of the COVID-19 outbreaks in China in recent months were caused by imported seafood, people should think about new approaches to tracing the earliest COVID-19 cases linked to the seafood market in Wuhan.

The possibility that the COVID-19 outbreak in Wuhan was caused by imported seafood contaminated with SARS-CoV-2 cannot be ruled out, he said.

Gao, director-general of the China CDC, said he is open to such a view, and "it seems that such a possibility is increasing" with more research and discoveries over the past few months globally.

"Origin-tracing of the virus is a purely scientific matter and should be left in the hands of scientists," Gao said. "Much is still unknown about the virus, and persistent and rigorous scientific efforts must be made on the path to finding the answer."

Such efforts can also contribute to the prevention and control of possible new epidemics or pandemics caused by any new coronavirus that could emerge in the future, he said.