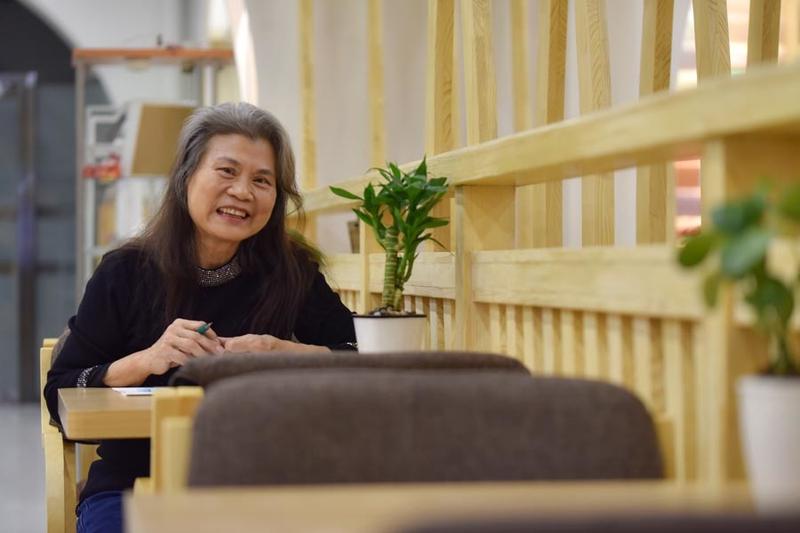 It all stems from a humble piece of paper. That, combined with skillful and delicate handiwork, a vivid imagination and perseverance, the often overlooked but necessary ingredient for any successful artist, produces something beautiful. Huang Li-hsiang is an aficionado of this form of artistic endeavor. She makes a piece of paper come to life by turning and transforming it into animals, vibrant flowers or elegant decorations.

It borders on the magical. She creates "lives" with her hands and breathes "souls" into the paper. When entering her "paper paradise", in Qingdao's West Coast New Area, Shandong province, she becomes the benign fairy lady of a paper-art wonderland.

"Paper art is everything about my life, and I have been enjoying it throughout," Huang, who comes from Taiwan, told China Daily in an exclusive interview last week.

"Paper art requires no educational background nor wealth; all you need is passion," adds the 63-year-old.

"A flat piece of paper can become any 3D object, just as an individual has infinite possibilities," Huang says.

Huang, founder of Paper Art Design Studio, has been engaged in the design and research of paper crafting for more than 30 years. 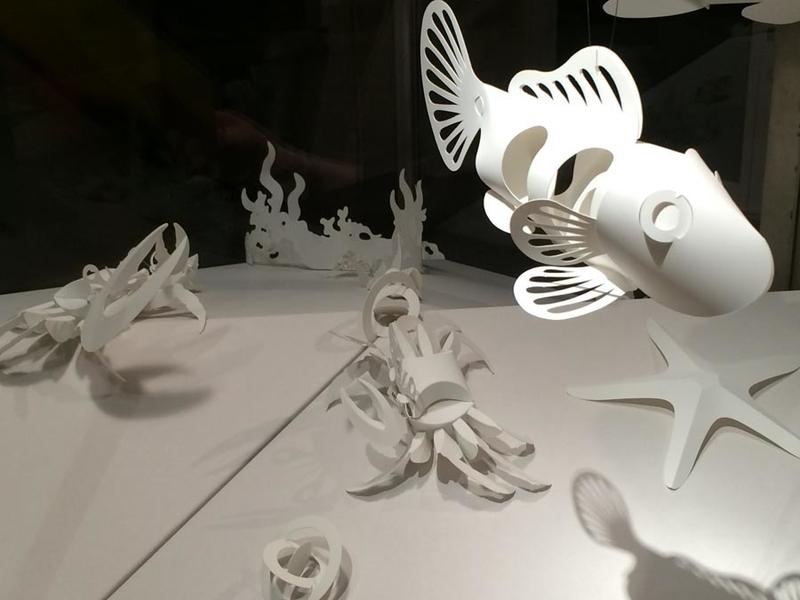 Some paper sculptures being exhibited at the Louvre in France in 2016. (PHOTO PROVIDED TO CHINA DAILY)

Huang believes everyone comes to this world with a certain mission and hers was destined to be connected with paper.

"I was keen on folding pieces of paper when I was 3 or 4 years old and I kept fiddling with them until I fell asleep with them in my hands," recalls Huang, who has boasted a real talent for crafts and DIY since childhood.

In her 20s, she met a group of friends who were also keen on creating art with paper. They proceeded together as a team. Fast forward a few decades to the present day and Huang's childhood hobby has become a lifelong career.

Since 1995, her team has undertaken numerous paper art exhibitions and cultural exchanges and left its footprint in more than 30 major cities across the world.

She and her team have experimented with the paper they use. They sometimes "coat the paper with a 'ceramic-like' layer, making it look as smooth as ceramic, and waterproof, creating a sense of dimension with some layering effects", Huang says.

Since 2009, she has been listed as one of the art designers for Vogue China.

In 2013, the team participated in a bid to create the most pop-ups in a pop-up book that was recognized by Guinness World Records. It was achieved by 168 pupils from Taichung city, Taiwan. The completed book is 107 meters in length and the entire collection comprises 149 large art pieces, 296 pages in total, joined together with folded pages in the shape of a concertina.

In 2016, the team held an exhibition themed on ecosystems at the Louvre in France, which was hailed as an outstanding success. 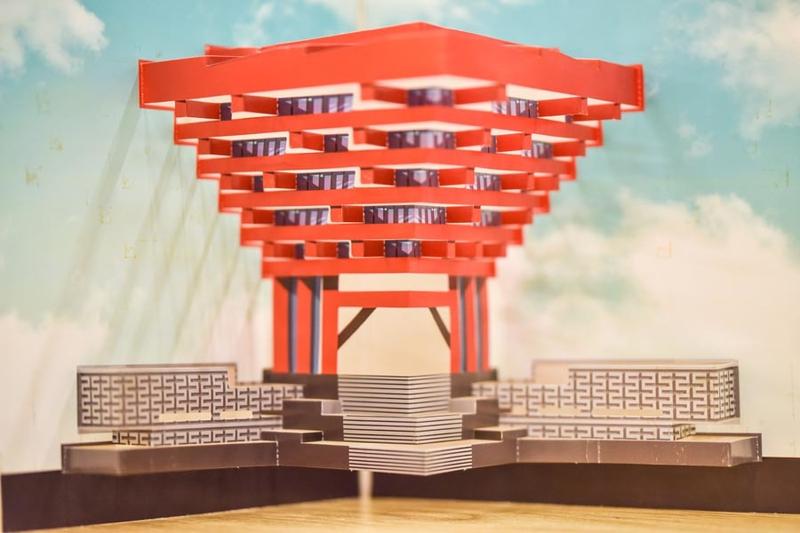 A model of the Chinese Pavilion at the World Expo 2010 in Shanghai. (PHOTO PROVIDED TO CHINA DAILY)

Huang started to dabble in aesthetic education for children in 2002, when her team launched a summer camp to teach young people the culture of paper art, and encouraged them to not only draw inspiration from daily life for their artistic design, but also live in an artistic way.

The team has opened an aesthetic studio in Qingdao, aiming to do more of this type of work and to cultivate more aesthetic appreciation in children on the Chinese mainland.

Huang first came to the Chinese mainland in 1988, when cross-Straits direct transportation was realized and residents in Taiwan came to visit relatives and seek their roots.

"I read a beautiful piece of poetry about Qinghai Lake, the Yellow River and the Jinsha River when I was little, so I had been longing to see great landscapes on the mainland," Huang recalls. "When the plane finally flew over Shanghai and I saw the cityscape from the window, I was overwhelmed and shed tears. 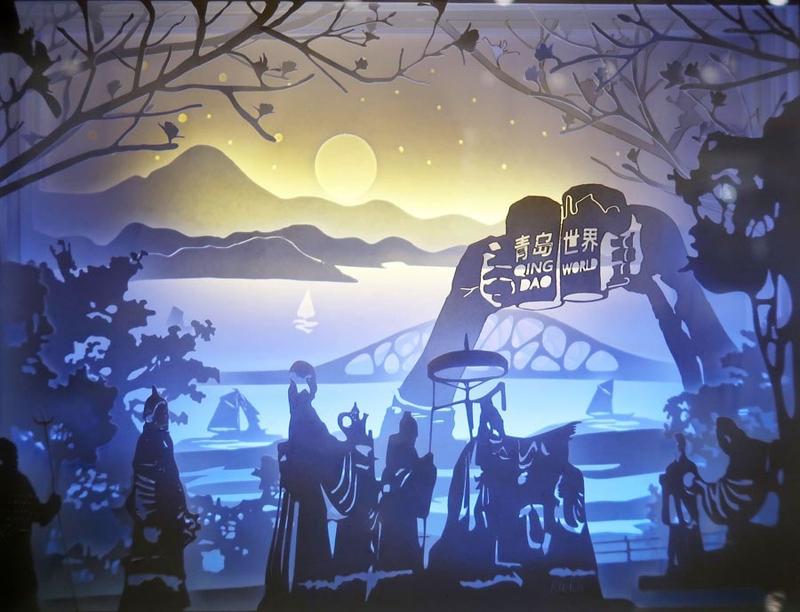 A piece of work by her team which was given as a gift to foreign guests of the Shanghai Cooperation Organization Qingdao summit in 2018. (PHOTO PROVIDED TO CHINA DAILY)

Huang says that, when she visited the city in 2015, she liked Qingdao at first sight. The next year, she moved her studio to the city's West Coast New Area. She adds that she enjoys the warm winter and the summer breeze, and loves to take regular walks along the beach, which often ignites ideas and brings inspiration.

One of the team's major tasks is to teach younger generations how to learn about the world through paper art.

"Our team has tried to explore a simple way to enable young children to learn the basic skills of paper art," says Yao Chun, a member of Huang's team.

"We hope kids can easily get access to paper art. However, our goal does not only focus on craftsmanship," says Yao. "The manual work with paper is a way to lead children into different kinds of knowledge, such as science, technology, engineering, arts and math."

"More importantly, children can cultivate a healthy outlook on life, and a better understanding of the world, by themselves," adds Yao.

So far, more than 1,000 children have participated in their courses. 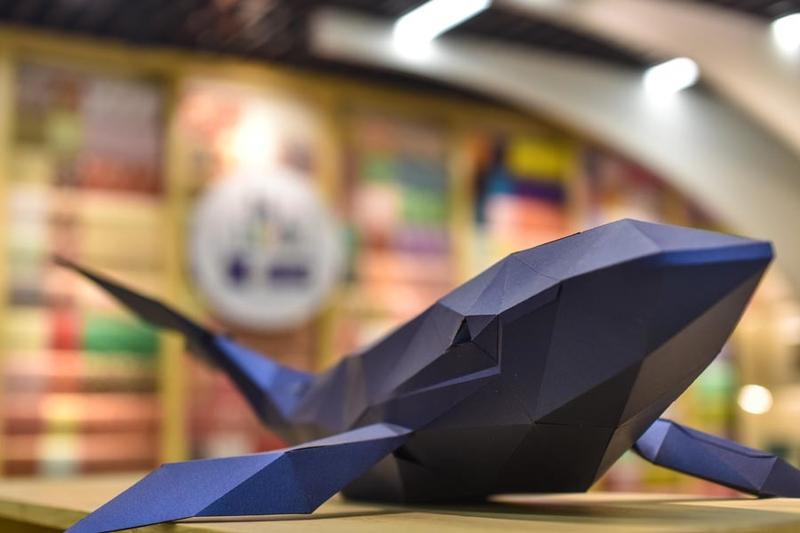 A paper whale in her studio. (PHOTO PROVIDED TO CHINA DAILY)

Huang and her teammates have made more effort to spread Chinese culture through their aesthetic work.

Among their representative pieces, a paper artwork that integrates local culture, history, modern development and key landmarks in Qingdao was selected by the local authorities as a gift to be presented to foreign guests who participated in the Shanghai Cooperation Organization Qingdao summit in 2018.

"The best way to introduce a country or a city is to tell stories of its local culture," says Huang.

"Paper by paper, story by story, the culture of paper art can enhance cross-Straits ties and unite Chinese people together, even with friends from all over the world."

Huang's team champions the spirit of the moso bamboo, a temperate species of giant timber bamboo that is native to South China. "The root of this plant grows deeply into the soil in its early years to lay a good foundation for future growth," says Huang.

"Once our team settled here, we devoted ourselves to our mission－to spread the passion for paper art among more people."