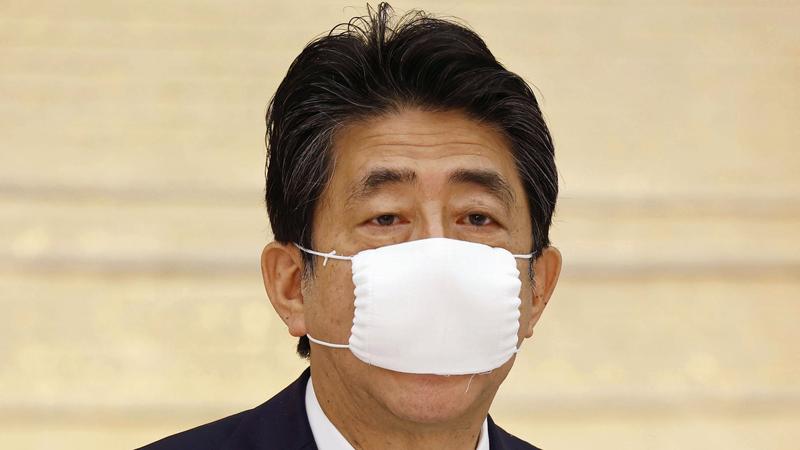 Japan's Prime Minister Shinzo Abe speaks during a meeting of government and ruling party officials at his office in Tokyo, May 27, 2020. (PHOTO / Kyodo News via AP)

TOKYO - Prosecutors have asked Japan’s former Prime Minister Shinzo Abe to report for voluntary questioning in a case they are building against his secretary over unreported political funds involving as much as 40 million yen (US$382,848), media said on Thursday.

Ex-premier Abe, who stepped down due to ill-health in September, is under fire after sources told media his office helped cover the costs of dinner parties for supporters, a possible violation of funding laws that conflicts with Abe’s vehement denials in parliament last year.

Abe himself has been asked by Tokyo prosecutors to appear for voluntary questioning about the issue, media reported later on Thursday

The scandal also threatens to embroil Prime Minister Yoshihide Suga, who was widely seen as Abe’s right-hand man during his tenure and has defended him in parliament.

Abe’s secretary is quoted as telling investigators that the income and expenditures “should have been included in the political funding report” though “it was common practice not to,” according to the Yomiuri Shimbun newspaper.

Abe himself has been asked by Tokyo prosecutors to appear for voluntary questioning about the issue, media reported later on Thursday.

Abe’s office did not immediately respond to requests for comment on both reports, while a spokeswoman at the Tokyo District Public Prosecutors Office said she was unaware of the development and the office would not make announcements on any case while investigations were ongoing.

The scandal also threatens to embroil Prime Minister Yoshihide Suga, who was widely seen as Abe’s right-hand man during his tenure

Prosecutors are building their case on what they see as the failure to report 14 million yen in five years’ worth of party attendee contributions - via ticket sales - as both income and expenditure, as well as an additional eight million yen that Abe’s office paid to cover shortfalls in party costs that the contributions didn’t cover, the Yomiuri said. The newspaper did not identify how the remaining 18 million yen was spent.

Politicians in Japan are forbidden to provide anything to constituents that could be construed as a gift. The rule is so strict that two ministers in Abe’s cabinet last year had to quit in quick succession for giving things such as melons, crabs and even potatoes to voters in their constituencies.

Abe had repeatedly said in parliament that “there was no income or expenditure that needed to be included in the political funding report,” and denied his office had covered the gap between ticket sales and the costs of the party.

Abe said last week he was aware of the accusations and promised his office would “fully cooperate” with prosecutors.

Last week, Suga deflected questions on how he would take responsibility for making inaccurate statements in parliament, but said “if it comes to be that what I said was different from the facts, then I will likely take action given that I too am responsible for my responses.”

A ruling Liberal Democratic Party (LDP) lawmaker close to both Abe and Suga told Reuters the investigation could take a long-term toll.

“If Abe’s secretary is arrested and Abe is questioned, it will damage the overall image of the LDP,” he said.