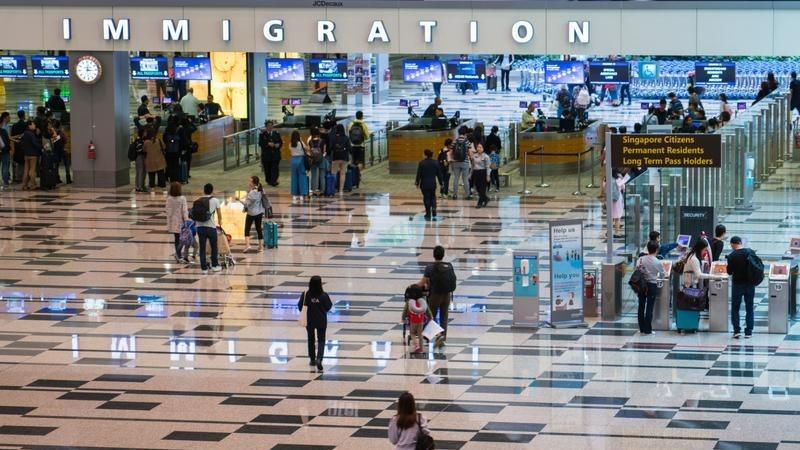 The shelving of the Hong Kong-Singapore travel bubble shows just how delicate the process of reopening borders is -- even for places that have largely contained the coronavirus.

The cities’ virus outbreaks are far less intense than in places such as the US and Europe, but a recent uptick in cases in Hong Kong proved enough to delay the start of the air corridor between the two financial hubs by two weeks, dashing the plans of those who booked flights that were due to begin Sunday.

The cities’ virus outbreaks are far less intense than in places such as the US and Europe, but a recent uptick in cases in Hong Kong proved enough to delay the start of the air corridor between the two financial hubs by two weeks, dashing the plans of those who booked flights that were due to begin Sunday

The bubble between Hong Kong and Singapore was heralded as a pandemic world-first, allowing people to travel to and from the two places without the need for quarantine. Authorities are reviewing a new launch date.

“At this particular moment, we have mutually agreed to put this scheme back by two weeks. This would allow us to review the situation and to have Hong Kong's new wave (of COVID-19 infections) settled a bit,” said Hong Kong Secretary for Commerce and Economic Development Edward Yau Tang-wah on Saturday.

“This is a sober reminder that the COVID-19 virus is still with us, and even as we fight to regain our normal lives, the journey will be full of ups and downs,” said Singapore Transport Minister Ong Ye Kung.

The two sides agreed that the bubble would be suspended if local infections exceeded five on a rolling seven-day average. That wasn’t even met in Hong Kong before the decision, but the recent jump in infections there was enough for authorities to apply the brakes, handing another setback to the aviation and travel industries of the two cities, which had some of the region’s busiest airports before the pandemic.

“The travel bubble will eventually be resumed, although whether it will be in two weeks’ time is hard to say as it depends on how quickly the virus situation in Hong Kong improves,” Bloomberg Intelligence analyst James Teo said. “Even when it does happen, we should not expect plain sailing from then on.”

“Once more contact-tracing is done in Hong Kong and most cases become linked, even if new daily cases remain high, unlinked cases may start falling below five a day consistently, allowing the travel bubble to start,” Teo added.

Strict border curbs have helped Asia contain the coronavirus better than other parts of the world, with countries like New Zealand limiting the entry of travelers and imposing mandatory quarantines as a way of stopping the virus at their doors. But the approach -- which has seen some all but eliminate COVID-19 -- has come at a heavy cost, decimating tourism with cross-border travel basically paralyzed.

While in-country containment of the virus has resulted in the world’s 10 busiest domestic air travel routes now all being in Asia, according to OAG Aviation Worldwide Ltd, Hong Kong’s Cathay Pacific Airways Ltd and Singapore Airlines Ltd continue to struggle as they have no domestic travel market to fall back on. Cathay’s shares slid as much as 4.2 percent on Monday, their biggest loss in two months, while Singapore Airlines fell less than 1 percent.

Even if the Hong Kong-Singapore corridor opens, the boost to the two aviation hubs will be limited, said Rico Merkert, professor of transport at the University of Sydney’s business school. Singapore Airlines and Cathay will continue to struggle because they can’t funnel onto the route those travelers who would normally arrive from Europe and the US, he said. 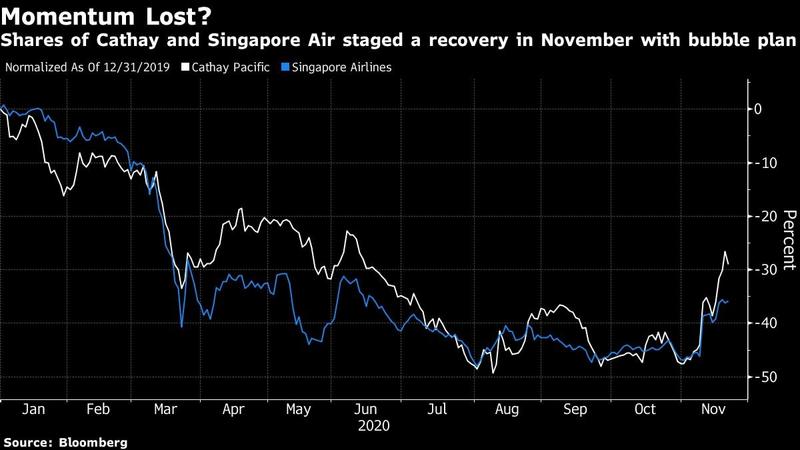 “Without that feeder traffic, those bubbles will at best be limited to the local population,” Merkert said. “International travel is going to remain a tricky affair.”

Cathay had described the bubble as “a hugely encouraging development and an important first step in the return of regular international air travel to and from Hong Kong,” as well as a “milestone showcase” for other travel bubbles. Cathay’s traffic numbers for October slumped 98.6 percent from a year earlier to just 38,541 passengers. Singapore Airlines carried 35,500 passengers last month, down 98.2 percent.

“Bubbles provide a little bit of incremental additional international traffic in the interim period until the pandemic ends,” Sobie Aviation founder Brendan Sobie said on Bloomberg Television, adding that the impact of the bubble plan is mostly symbolic. A full recovery in air traffic will still take a few years, even with a vaccine, though bubbles will help get the process moving, he said.

An increase in cases in either Singapore or Hong Kong was always a risk for those who booked tickets when the bubble plan was announced on Nov 11. It’s still possible to travel between the two cities, but a mandatory quarantine applies on both sides.

“That is the main deterrent, I have no interest in sitting in a hotel room for two weeks -- it’s not healthy,” said Mungo Paterson, 42, a Briton living in Hong Kong who booked a Dec 7 flight to Singapore shortly after the bubble plan was made public.

“I was excited when they announced it, I thought ‘here we go,’” said Paterson, who planned to go to Singapore for work and to see his sister and her family. “I’m now holding off confirming until Dec 2. I think there’s a 50-50 chance the flight will happen.”

After a long lull with just a handful of cases a day, the deteriorating situation in Hong Kong prompted the government to impose tighter social-distancing rules and to close schools again. The city reported 68 new infections Saturday, with all but seven locally transmitted, a sign the virus is spreading in the community. To encourage people to take virus tests, the government plans to offer a payment of HK$5,000 (US$645) to anyone who tests positive.

Cathay and Singapore Airlines were due to fly a return trip each on Sunday and then three or four a week until starting daily services next month. Passenger numbers were to be limited to 200 per flight. After the suspension, the carriers offered refunds or seats on non-travel bubble flights, which require passengers to undertake quarantine. The bubble would replace that with virus tests and a condition that arrivals can’t have traveled internationally in the previous 14 days.

Hong Kong and Singapore’s economies are heavily reliant on tourist and transit travel, and Transport Minister Ong has warned that the closing of borders puts Singapore’s very future at stake. The city-state has agreements with a handful of countries allowing business or essential travel under certain circumstances, but none reached the stage of the plan with Hong Kong. Singapore reported 12 new COVID-19 cases on Sunday, all of them in travelers coming from overseas.

Global coronavirus infections topped 58 million over the weekend, with daily increases in the US nearing 200,000, yet it took fewer than 100 local cases in Hong Kong for the bubble plan to be put on ice.

Singapore and Hong Kong have said they hope their agreement can be a model for other nations trying to open up, but the delay further clouds the outlook for anyone with ambitions for travel, not just between those two cities, but everywhere else too. Air traffic globally is expected to be at just 33 percent of 2019 levels at the end of this year, and “hopefully” at 50 percent to 60 percent by the end of 2021, Alexandre de Juniac, director general of the International Air Transport Association, said Friday.