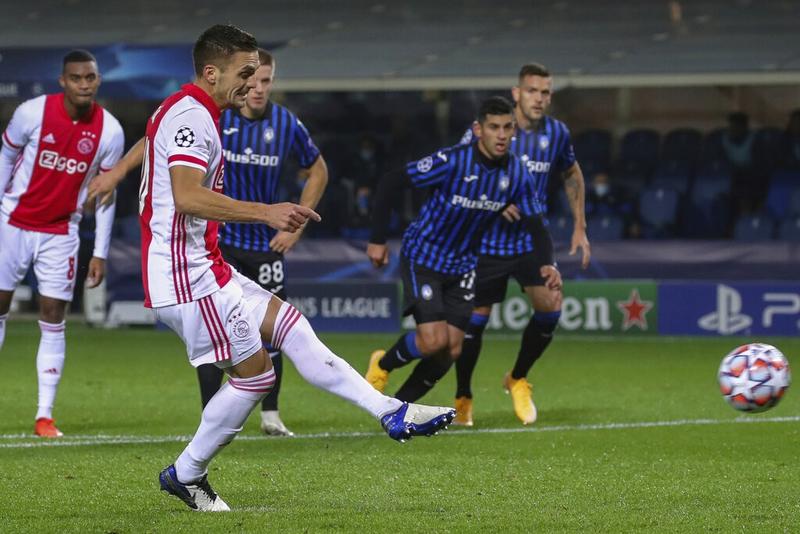 Ajax's Dusan Tadic scores from the penalty box during the Champions League Group D soccer match between Atalanta and Ajax at the Gewiss Stadium in Bergamo, Italy, Oct 27, 2020. Tadic is among a few Ajax players who could not travel to Denmark for their side's match against Midtjylland in Denmark. (STEFANO NICOLI / LAPRESSE VIA PA)

AMSTERDAM - Ajax Amsterdam will have only 17 players available for Tuesday’s Champions League clash against Midtjylland in Denmark after several players had to be left behind because of positive COVID-19 tests, coach Erik ten Hag confirmed on Monday.

But he said he could not speak about individual cases because of privacy laws.

There are few players who can play in the Netherlands but did not get permission to enter Denmark and it’s a bit strange. They have no symptoms or complaints ...

Skipper Dusan Tadic, goalkeeper Andre Onana and midfielders Davy Klaassen and Ryan Gravenberch were among those who stayed at home while back-up goalkeepers Maarten Stekelenburg and Dominik Kotarski also did not travel, leaving the club with just one goalkeeper, Kjell Scherpen, for the match at Herning.

The 20-year-old has yet to debut for the club.

Ajax published a list of the 17 players without comment on their website and Ten Hag avoided questions about those who did not travel when questioned at Monday’s pre-match news conference.

The coach said Ajax players were tested on Monday and the club had been in discussion through the day with various authorities about who could travel to Denmark.

He also said he was hopeful some of those left behind might be allowed to travel on Tuesday to join up with the rest of the squad as Ajax look for their first win in Group D.

“There are few players who can play in the Netherlands but did not get permission to enter Denmark and it’s a bit strange,” he said.

“They have no symptoms or complaints. If they might still be able to play rests in the hands of the medical personnel and the authorities. I have strong hope that they can play but I am not sure.

“There are whole lot of different rules between different countries, even within the European Union. The players we have here are good players. Some might have to play out of position but we here are fit and ready to play,” he added.

“I understand the COVID rules are tough but we must also be thankful that we can play.”

Dutch media said that a total of 11 players had tested positive at the club – from both the ranks of the first team as well as the reserve squad, who compete in the Dutch second division.