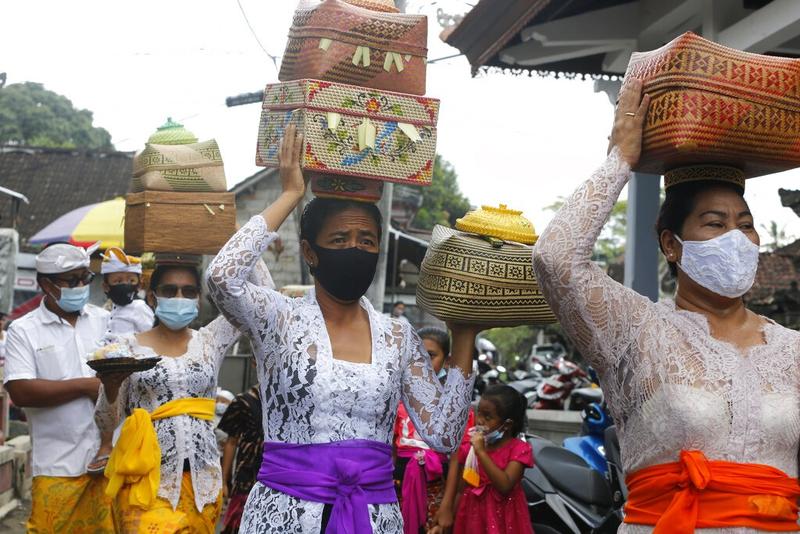 Women wear face masks as they carry offering to a temple during the Hindu ritual of "Grebeg" at the Tegalalang village in Bali, Indonesia, Oct 22, 2020.  (FIRDIA LISNAWATI / AP)

Domestic worker Sringati wishes she can see her family in Indonesia soon but the pandemic has kept her in Hong Kong.

While she is grateful for an employer who helps her cope with anxiety, other domestic workers in the city may not be as fortunate.

“The pandemic has also heightened discrimination against (domestic) workers,” Sringati said. According to the chairperson of the Indonesian Migrant Workers Union, there is a misconception that domestic workers are virus carriers as they usually gather together in big groups during their days off.

The plight of domestic workers reflects how the pandemic has been especially hard on women. Most of the domestic helpers are women and highly vulnerable to exploitation. But the pandemic’s harsh impact on women cuts across the social divide.

President Xi Jinping recently highlighted the pandemic’s impact on women worldwide in his video address at the High-Level Meeting on the 25th Anniversary of the Fourth World Conference on Women organized by the United Nations General Assembly. UN Secretary-General Antonio Guterres also said the gains made in gender equality over the past decades are at risk of being rolled back.

Analysts said the lockdown measures imposed to curb the virus outbreak have increased the incidence of domestic abuse, pressured more women to take unpaid care work at home and taken away their livelihoods.

“Women have been hit hard economically and socially by COVID-19,” said Mohammad Naciri, regional director of UN Women — the United Nations Entity for Gender Equality and the Empowerment of Women — for Asia and the Pacific.

Naciri said that with most families confined at home amid the pandemic, women need to do more unpaid care work — like taking care of the elderly and homeschooling their children. This is because “there’s a huge social pressure for women to be caretakers”.

Jean Enriquez, executive director of the Manila-based Coalition Against Trafficking in Women, Asia-Pacific, said the pandemic has seen more women who “are overworked and overburdened because they are still expected to do care work at home”.

Social pressure and cultural norms have long consigned women to unpaid care work. Women perform 76.2 percent of the total amount of unpaid care work, or over three times more than the men, according to the International Labour Organization. In the Asia-Pacific region alone, a woman performs 262 minutes of unpaid care work each day compared with a man’s 64 minutes.

The pandemic has “disproportionately increased” the time women spend on family responsibilities, according to management consulting firm McKinsey and Company. This, in turn, forces them to drop out of the labor force.

In its latest report on gender equality, the firm said women’s jobs and livelihoods are more vulnerable to the pandemic. It estimated that female job loss rates due to COVID-19 are about 1.8 times higher than male job loss rates globally.

Industries that employ mostly women workers are also the ones hardest hit by lockdown measures. McKinsey said women “have more than the average share of employment” in food service, retail and other services including the arts, recreation and public administration.

“Helplines were inundated by millions of panic calls from the survivors of varied forms of violence such as sexual abuse, forced marriage, trafficking and cybercrimes,” Patel said.

The Asia-Pacific Gender in Humanitarian Action Working Group said there is a “staggering” increase in the number of calls to helplines in India, Indonesia and Singapore. Consultations with Rohingya women and adolescent girls in the Cox’s Bazar area refugee camps in Bangladesh have shown a rise in household tensions and domestic violence.

“Since gender-based violence is documented to be underreported at all times, and especially in crises, it is likely that figures and trends seen are just the tip of the iceberg,” the group said in its May report.

Mitigating the impact of the pandemic on women would entail ensuring that food and other basic needs reach the most vulnerable — these include the poor and the survivors of gender-based violence, Jean Enriquez said.

Sivananthi Thanenthiran, executive director of the Asian-Pacific Resource and Research Centre for Women, a nonprofit group based in Kuala Lumpur, said domestic violence and the burden of unpaid care work will remain a problem even after the pandemic. This is why she is urging governments trying to rebuild their economies to include gender-sensitive policies.

“We need all of our rights — not just those that are useful to governments where women’s bodies are a tool to achieve development goals — but also those which are meaningful to us and recognize us as equal citizens in our country,” she said.