Livestreaming to enhance value of CIIE 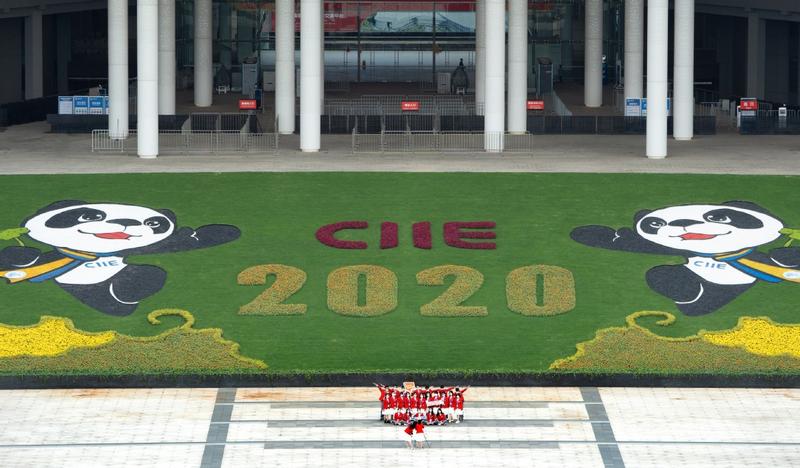 This undated aerial view shows volunteers posing amid the decorations at the National Exhibition and Convention Center in Shanghai, the venue for the 3rd CIIE. (GAO ERQIANG / CHINA DAILY)

Livestreaming is arguably the catchiest word in China's retail playbook this year, thanks to the rapid growth of online-to-offline shopping and COVID-19-induced social distancing.

We see livestreaming becoming mainstream because it is one-to-one live connection that is entertaining and educational. We have to bring it as a tool to interact with consumers who don't have the chance to visit the CIIE.

Now that the 3rd China International Import Expo is around the corner, exhibitors are looking to anchor this new vehicle to celebrate the fair and showcase products to a much broader audience.

New Zealand dairy giant Fonterra is scheduled to host some 15 livestreaming sessions from their booth during the expo starting Nov 5, broadcasting everything from product debuts to bakery techniques, according to Teh-han Chow, CEO of Fonterra in China.

"Livestreaming obviously is the trend now. We are helping to spread the news about the importance of imports and the role it plays in the economy," he said.

With a mixture of excitement and nervousness, Chow said he would personally participate in one session that will introduce two innovative beverages using Fonterra's ingredients. Other sessions will see professional chefs and nutrition experts educating Fonterra's individual and business customers, both existing and prospective.

"You have to be able to chitchat and respond very quickly, and be hands-on. And you have to come up with something fun or entertaining to say," he said.

Apart from introducing new brands and products to the Chinese market, Fonterra is using the CIIE to sign agreements with local partners. According to Chow, livestreaming stands to amplify the influence of these newly-formed partnerships and raise the awareness of those domestic labels that might not necessarily qualify as an "import" exhibitor to make it to the event.

"So, with livestreaming, we are not just promoting our products, but the CIIE as a whole," he said.

As an early advocate of livestreaming in its infancy, French cosmetics giant L'Oreal Group will make livestreaming the core of its presence throughout the six-day event.

Equipped with a dedicated livestreaming room, L'Oreal will conduct livestreaming via six major social media and e-commerce platforms from Weibo and Xiaohongshu to WeChat and Taobao.

"We see livestreaming becoming mainstream because it is one-to-one live connection that is entertaining and educational," said Fabrice Megarbane, president and CEO of L'Oreal China."We have to bring it as a tool to interact with consumers who don't have the chance to visit the CIIE."

With the full participation of its 11 brands in China, L'Oreal is inviting Justin Li Jiaqi, a former L'Oreal employee and a top-tier livestreaming host who is dubbed China's best lipstick-seller, to join the fray, amid an army of online influencers. Spectators are also anticipated to converse virtually with L'Oreal colleagues from Paris, where they are set to share the avant-garde fashion trends.

Megarbane said the company is planning to unveil a virtual livestreaming host dubbed M Jie backed by virtual reality technologies at the expo.

The COVID-19 epidemic is expediting the digitalization of the traditional exhibition industry, with smooth virtual meetings, messaging and livestreaming becoming imperative to connect exhibitors and buyers in many trade fairs.

But livestreaming at the CIIE is by no means unique to retail brands or consumer companies. Zai Lab, a biopharmaceutical company debuting at this year's expo, is elbowing its way in livestreaming to reach out to multiple stakeholders and keep them abreast of the company's latest developments and milestones.

At least three major livestreaming sessions via WeChat, each lasting one hour or so, are scheduled to be held from Nov 5 to Nov 7, according to Chen Xiaoyu, senior director of corporate communication.

The inaugural session will feature a signing ceremony between the firm and the Hainan provincial government, followed by a booth tour conducted by two Zai Lab employees. The other two sessions would focus on engaging with technology partners and patients and the general public.