By Xie Chuanjiao in Qingdao and Du Juan in Beijing 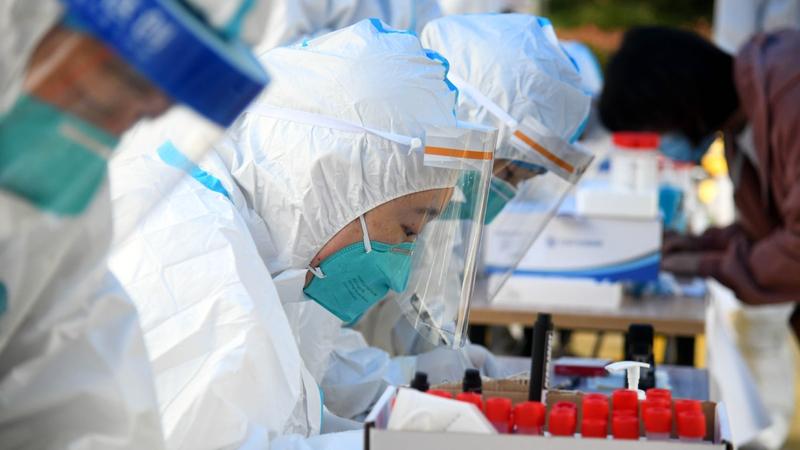 Qingdao pledged to enhance more targeted COVID-19 intervention measures, such as conducting nucleic acid testing on all imported cold-chain products and the people handling them, given that the city's recent outbreak was traced to two dock workers.

"Every single imported item is required to be tested, and personnel in the port areas who engage in loading, unloading, handling and transporting imported cold-chain food should stay in designated areas and undergo testing every three to five days before returning home," Chen Wansheng, an official with the city government, said on Tuesday.

For other workers who have direct contact with imported cold-chain food, nucleic acid tests will be carried out every seven days, said Chen, adding that tests will also be conducted in the vicinity of ports, cold storage facilities and other places.

Every single imported item is required to be tested, and personnel in the port areas who engage in loading, unloading, handling and transporting imported cold-chain food should stay in designated areas and undergo testing every three to five days before returning home.

"Epidemic prevention and control work in Qingdao has found sufficient evidence that the coronavirus can jump from objects to people, and the virus can survive for a long time under freezing conditions," Vice-Mayor Luan Xin said.

Qingdao, a major port that handles air and maritime cargo, remains under pressure to contain risks from imported infections. In order to strengthen its response, the city plans to build an infectious disease hospital, which is expected to offer 1,000 beds when it goes into operation in 2023, Luan said on Sunday.

"The hospital will provide general medical service on a daily basis, but will be able to meet an urgent need immediately if an emerging public health issue occurs in Qingdao and its surrounding areas," Luan said.

The virus recently reemerged in Qingdao, and 13 newly confirmed cases have been detected. Inappropriate disinfection in the room used for CT scans at the Qingdao Chest Hospital was believed to be responsible for spreading infections.

Of the 13, three were eligible for discharge from the hospital. "Two of them were tuberculosis patients, and both will continue to receive hospital treatment. The other one will undergo further observation over 14 days, in line with national regulations," Luan said on Tuesday.

Drawing lessons from the outbreak linked to the Qingdao hospital, other cities like Beijing started citywide hospital checks.

Gao Xiaojun, a spokesman for the Beijing Health Commission, said on Tuesday 11,000 hospitals and medical institutions should examine their personnel, medical equipment and work flows to prevent in-hospital infections.

One new imported case of COVID-19 was reported in Beijing on Monday, the municipal health commission said on Tuesday.

A 27-year-old woman arrived in Beijing from Jordan on Oct 13, and showed symptoms such as fever and headache while under quarantine at a designated hotel. On Monday, her CT scan revealed an infection and she tested positive for COVID-19.

The patient has been transferred to the Beijing Ditan Hospital for treatment, and all close contacts on the same flight have been put under quarantine, the commission said.

No new locally transmitted confirmed, asymptomatic or suspected cases of COVID-19 were reported in Beijing on Monday.